The last 2 days have followed the same routine – a tour of the local SBBO recording area then down to Backsand for the high tide (15.40 on the 24th).
The tours of the SBBO area produced little of interest other than 3 brown hawkers (23rd) and 23 dunlin on the beach (again 23rd).

The gull in the background was a pain in the proverial. The dunlin were making there way fown the beach towards me but everytime a dunlion found a worm he tried to take it. In the end they gave up and flew off.
On both days Backsand held a few ducks – a family of mallards and of tufties, plus 2 little grebes, 40-odd grey lags plus common and green sand pipers and greenshanks.


On both days the pattern was the same – a few green and common sands present when I arrived an hour before high tide with the numbers growing as high tide approached – final numbers being common sandpiper 6 and 5; green sandpiper 8 and 10 and greenshank 11 and 9.
On the 23rd both green and common sand spent a lot of time in front of the hide but on the 24th they kept their distance and only the occasional common sand came across the front.
On both days the common sands were very mobile calling and displaying to each other: 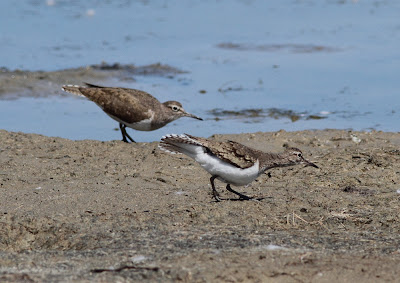 This increased shyness  may have been due to ringing activity as the ringers had an overnight session at there on Monday night. Interestingly one of the birds they caught was ringed at Backsand last year showing that some at least frequent the same haunts.
Today a little ringed plover turned up but it was also shy not coming close enough for a decent picture.
On both days the greenshanks were a huge disappointment in that they slept the whole time – not one went looking for food and redshanks were completely absent.
Water levels are very low (excessive pumping) and there’s a real chance it could be virtually dry if we have a prolonged hot period..............I hate to say it but it could do with a few inches of rain!

Posted by Greater Kent Birder at 00:26 No comments:

Scratching around for something to photograph

A wander round Sandwich this morning was not very rewarding though whilst we were at Restharrow Scrape a wood sandpiper flew in;  the only other bird of note was a common sandpiper and that was miles away.
On the way home I spotted a hobby on the fence line near Dickson’s corner. I stopped the car and managed a couple of shots before the bird flew off and that was the last I saw of it.
It was too early to go home so I went to the old rifle range at Kingsdown.
I immediately found the hoped for kestrel, a juvenile, but it stayed high on the cliffs and kept moving along the cliff face as I approached so no pictures. At the southern end of the range I found a couple of rock pipits carrying food. I didn’t stay long as they seemed to be a little disgruntled at me being there.
There were a few house martins hawking the cliffs and I found 2 (possible 3) nests with young – nice to see but only a fraction of the number nesting there only a couple of years ago. Whilst watching what they were doing I noticed 2 were visiting a puddle collecting mud so I sat close, partly hidden by one of the numerous signs and waited.
Many years ago I was watching “Out of Town” with Jack Hardgreaves (shows my age I know) when he was discussing whether house martins collected the mud in their mouth or on the top of their beak. I wouldn’t swear to it but my recollection is that he thought they carried the mud on the top of their beaks was but my photographs show they clearly collect it in their mouths!! 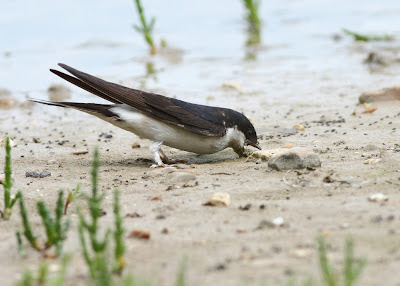 I’d only been there 10-15 minutes when it started to spit with rain so I packed up and went home to watch le Tour – great stuff.

Posted by Greater Kent Birder at 23:21 No comments:

﻿ ﻿
Restharrow scrape has enjoyed a few waders over the last week or so in the form of common, green and wood sandpiper and a little ringed plover. Today only the LRP and the green sand was present (whilst I was there) but they did come onto the islands near the hide so allowed a few record shots to be obtained.
The little grebes on the scrape are taking food to the nest (mainly leaches as far as I can see) though one chick has been seen. Other than that it’s only common stuff including a flock of ~30 grey lag.
The ringers have been pumping Backsand for several days now and at last some mud has appeared (though with the weather forecast it could well disappear again!). I went down there yesterday from 11.00 till 1.00 (all wrong for the tides) because a spoonbill had been seen by the ringers when they went to check the pump early morning. They had also seen a few greenshank and green sandpipers. Needless to say that when I got there there was no sign of the spoonbill and the only waders present were 3 oyster catchers – 2 adults and a near fully grown juvenile.
There is a little grebe down there but I have no idea whether it/they have a nest/young.
There were 3 little egrets in residence so I spent the morning trying to photograph them. One in particular spent most of its time in front of the hide but the light was poor with numerous showers so despite getting into some very interesting poses the images quality suffered markedly (especially with noise).

The dragonfly pool has now been dug and the excavated sand/soil graded into a shallow bank. Now we have to wait for it to fill and the insects to move in.

Posted by Greater Kent Birder at 18:24 No comments:

With the forecast looking good I decided to check out Restharrow and Backsand Scrapes.
I wasn’t going to do Backsand but since the water levels on Restharrow had dropped significantly over the last week or so it seemed worthwhile.
Restharrow was disappointing. A common sandpiper had been seen earlier in the week and a green sandpiper earlier this morning but all that was there when I was there was a lone redshank and that was miles away. Other than that it was as it has been for the last month, little grebe, coots, lapwings, oycs and a few tatty looking mallards and gulls. The only bit of interest were the house matins (and a lone swallow) which were collecting mud from the island in front of the hide. I took a few images to adorn this posting and the martins decided that was a cue to fight (or they could have been attempting to  mate) whatever it was it looked pretty violent. 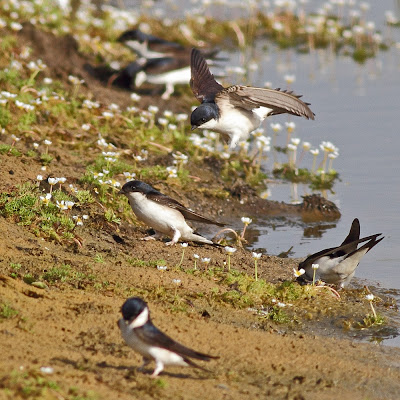 As I entered the Estate I noticed excavation going on in the adjacent field. The Obs have signed a lease for some more land – the field adjacent to Restharrow scrape - and have planning permission to dig another pool. This pool is being set out specifically for dragon flies though I suspect ducks and little grebes may find it attractive. What was amusing this morning was the antics of the cows – they had climbed into the embryonic pool and the digger man was trying to encourage them to leave.
Sorry about the picture but I only had the 400mm lens.
Newdowns to Backsand was very quiet, just a few chaffinch, house martins, reed warblers, whitethroats and a lone Cetti’s called from the rear bank of the reservoir bund. My last few walks down to Backsand have been enlivened by hares (5 on the last visit) and grey partridge but not today – I saw none.
Backsand was a big disappointment. After seeing the water levels at Restharrow I was expecting to see some mud banks but the water is still too deep so the only mud is around the main islands. On the duck front  there were 15 tufties (all adults going into eclipse) and a couple of dozen mallard (plus 3 juvs). There were 2 little egrets on the river and another 3 on the scrape but 2 of those soon flew off,
The field either side of the track leading to Backsand have wheat in them this year and it is covered with small snails (~ ½ inch across). I have no idea what species they are but they must be doing quite a bit of damage. 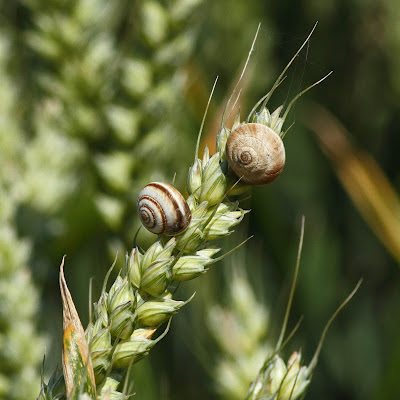 So anyone thinking of going down Backsand should wait a few more days in the hope it dies out some more though it rained quite a bit in Kingsdown last night; pumping the water out may be the only answer after the wettest drought in living memory..
Posted by Greater Kent Birder at 07:03 No comments: