We had 2  short trips to Carara. They were short because it was so hot. We had expected hot and humid but our stay on the Pacific coast was really hot - midday temps up to 37 and never below 35C. Indeed on the day of our Tarcoles river boat trip it was 31C at 8.30am.

Since we were more interested in photographing what we saw rather than accumulating a lot of ticks we did not use a guide; our thinking being if it was close enough to photograph then we should be able to see it. Small things flitting about the canopy were of little interest. The other factor was the cost. What we couldn't do was identify birds by call and try to whistle or tape lure them closer which is what quite a few guides seem to do. We will never know whether the cost would have been justified.

For our first trip we went along the Meandrica trail (near the river) and within 10 yards of entering the forest we found a pair of white whiskered puff birds only a few yards off the track.

So after 2 minutes I thought Carara was wonderful but after that thing got very slow. We did hear some manakins snapping but as we tried to locate them the calling faded then stopped completely. I also spotted a royal flycatcher - I'd  seen the bird moving through the forest about 20 yards away and had no idea what it was (and no chance of a photograph) when it raised it's crest - no mistaking that.
The orange billed sparrow was easy to id as was the black hooded antshrike (female) because we'd seen both of these earlier in the holiday. A chestnut backed antbird was a welcome addition to out list however. 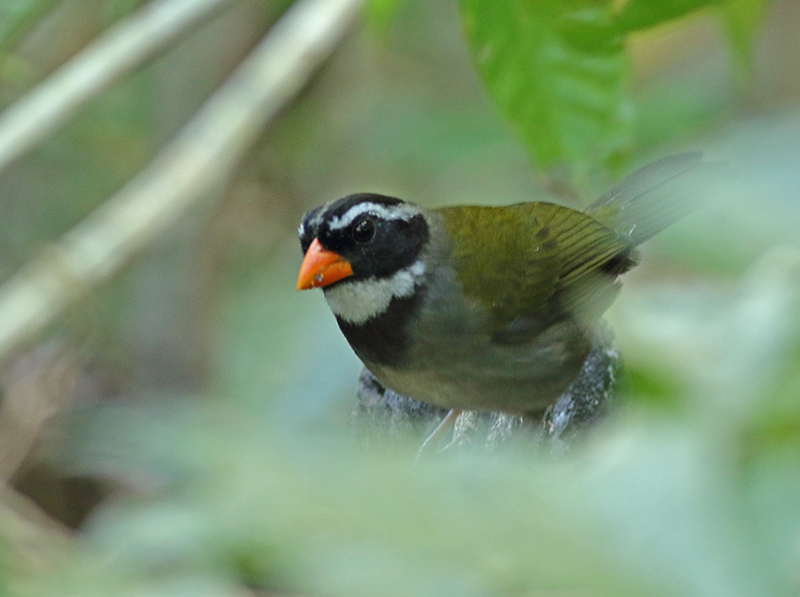 Later on we found another pair of puffbirds, a white tipped dove and a male black hooded antshrike but that was it for the camera.


The wet area often discussed in write ups of this trail was dry and completely covered with 5-6ft high reeds. We saw no one else on this trail though a group of capuchins took exception to our presence and were very aggressive.

For our second trip we went along the main trail at park entrance and things got off to a lively start with a steely vented hummingbird by the car park and as soon as we started along the trail it was clear there were a lot more birds here. Many were high up and/or invisible but it was nice to see movement and hear bird song - something lacking for much of the Meandrica trail. To start we saw birds we'd already logged - orange billed sparrow and black hooded antshike (at least 2).

But a stop overlooking a stream gave us Northern waterthrush, grey-chested dove and yellow-olive flycatcher.

Some rustling in the leaf litter had us peering into the gloom for several minutes before we spotted a thrush size bird almost completely immersed in the leaf litter. Eventually it came into view then very kindly hopped up onto a twig to consume it's catch: 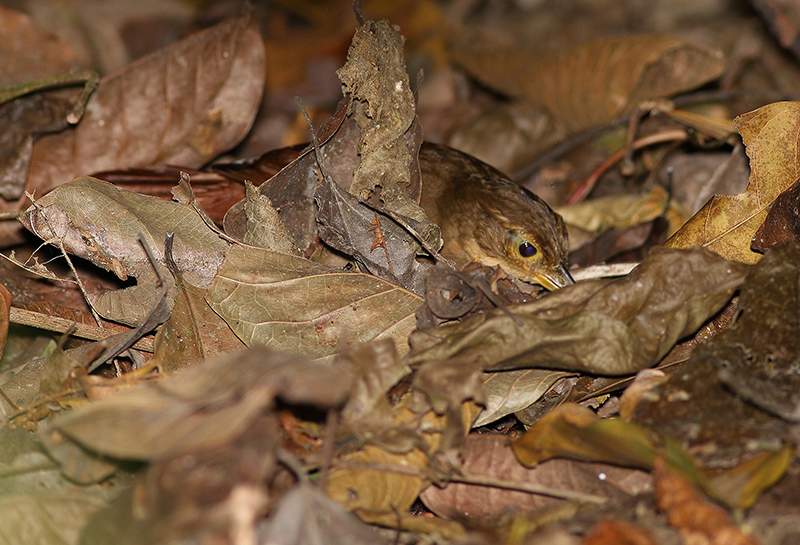 On the return leg we picked up a rufous winged woodpecker then had a pair of chestnut-backed antbirds hopping around in front of us coming within 10 yards. 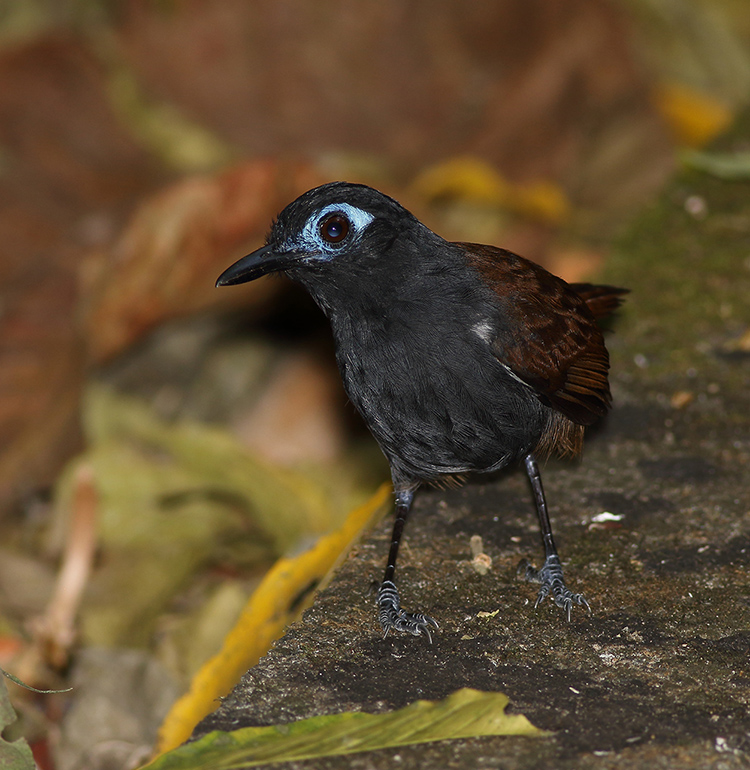 As the forest thinned we picked up streaked flycatcher and red-legged honeycreeper. 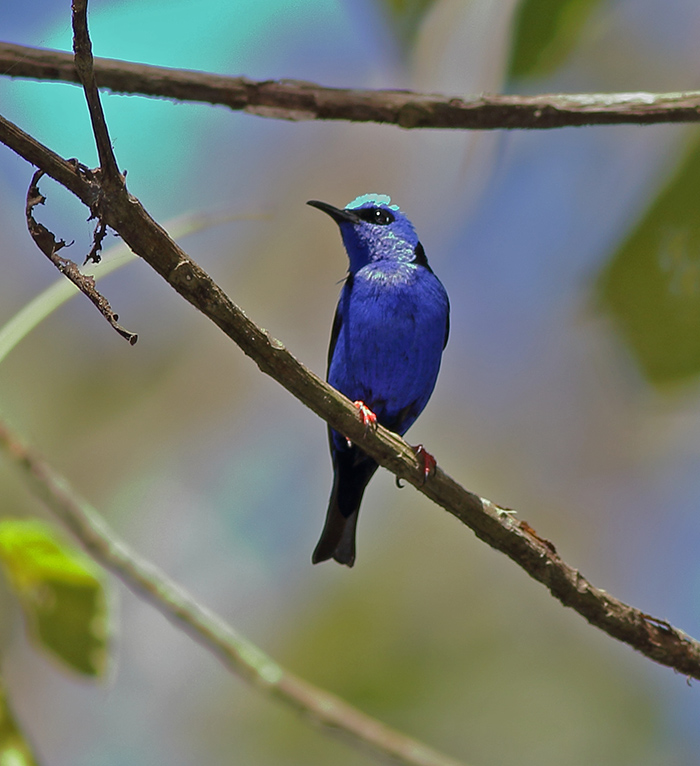 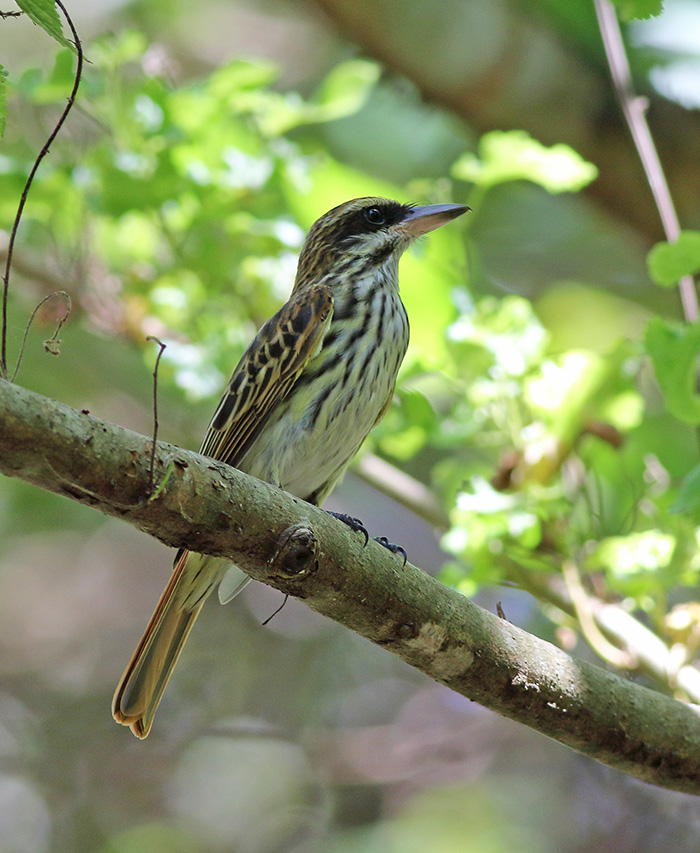 The final bird of the session was a gartered trogon again in the car park. 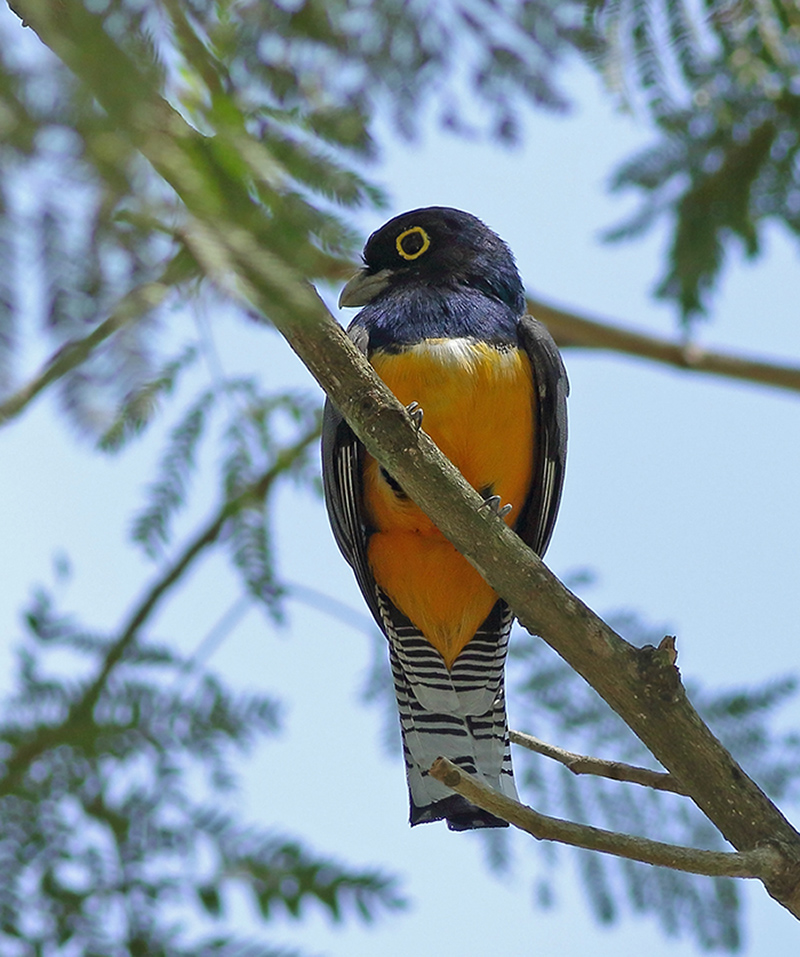 Not a huge list but quite a few flitters went unidentified and a number of chestnut-sided warblers were seen but not photographed.

All I can say is forest birding is difficult and when a bird is found the light conditions are truly appalling. To my mind a flash is essential. To illustrate this point here's a picture of the puffbird we saw on the Meandrica trail but taken using natural light - all I had was 1/60th sec at ISO 8000!!!!!. 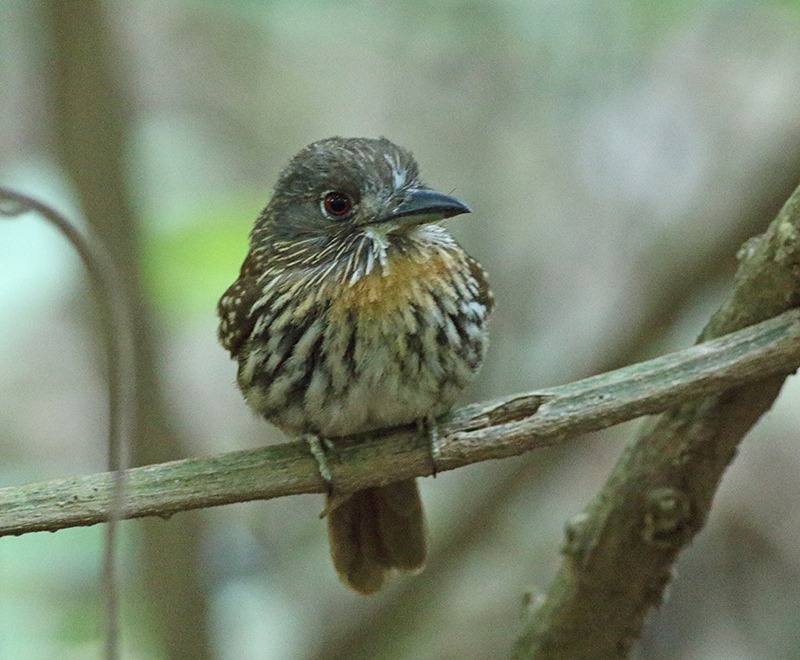 Just about all you can say about this picture is you can see it's a puffbird and bin it.
Posted by Greater Kent Birder at 15:51 No comments:

I'd booked a "Photographic and Birdwatching" trip on the Tarcoles river with Victours prior to the holiday. This was a private trip for the 4 of us with Vic himself as our guide (Victor Chaves). He'd asked if there was anything in particular I'd like to see during our correspondence and I gave him a list though I suspect all the species were on his normal itinary.
We met Vic in Tarcoles and had a coffee in one of the local cafes, then off to the boat at 6.00am
As we left the dock mangrove swallows surrounded the boat and landed on the bow and roof. They even followed the boat as we steamed along - I assume the boat scares insects off the water that they grab. 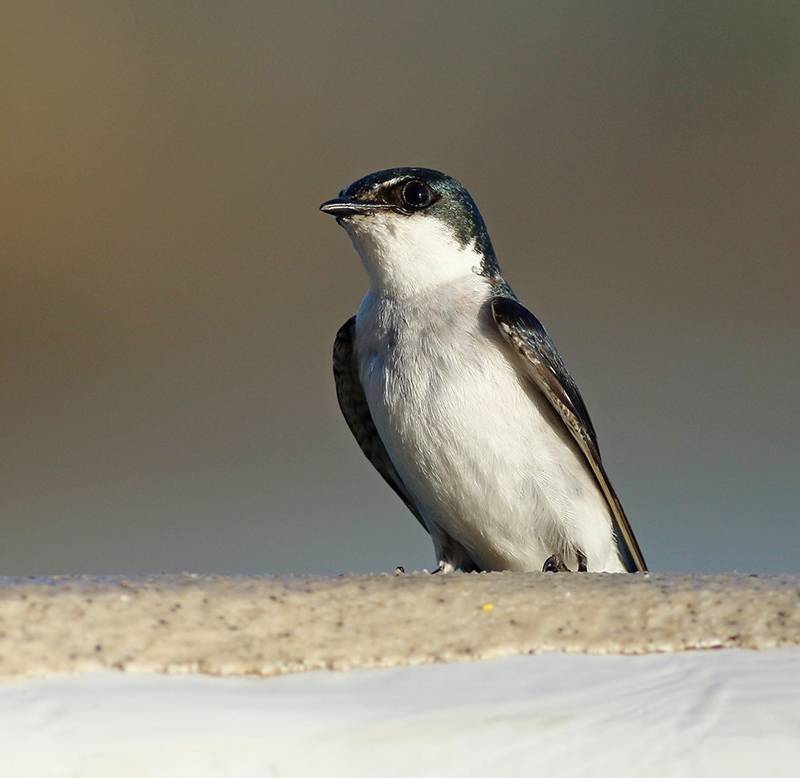 We'd only gone a few yards when the boat slowed and we went towards the bank for a ringed kingfisher and a few yards along there was a common black hawk. 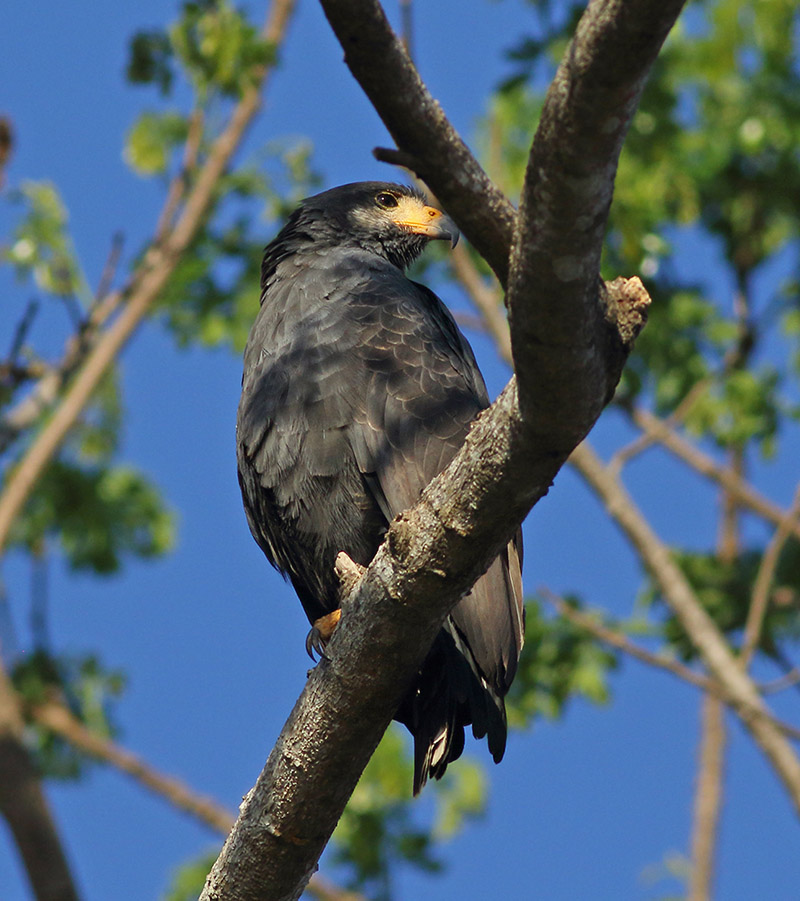 As we moved down river waders were ignored (although I fired off a few hopeful shots) but the boat slowed/stopped for anything a bit larger. 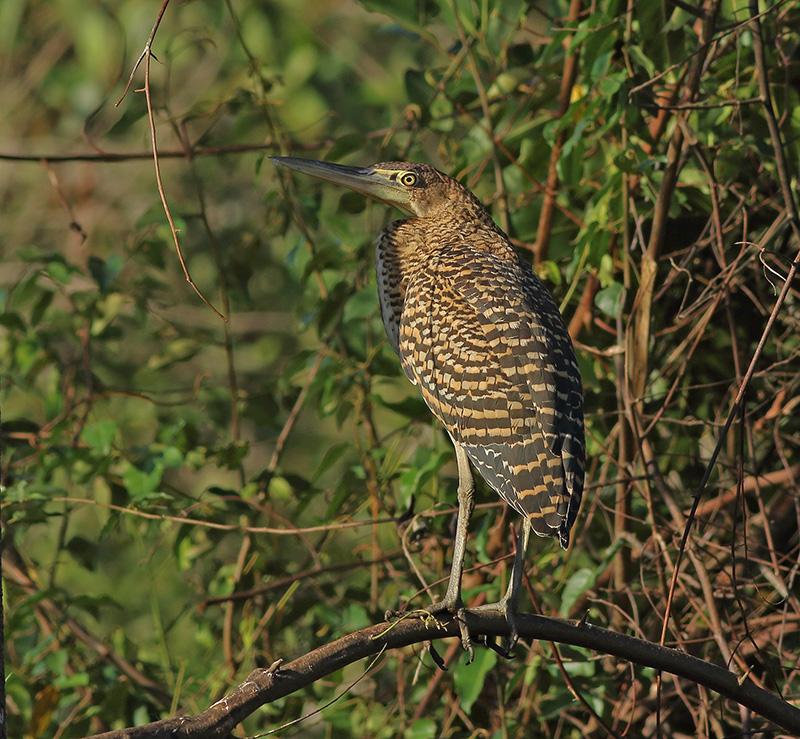 Down towards the estuary we moved into the mangroves getting close to yellow-crowned night heron and almost within touching distance of boat billed heron. 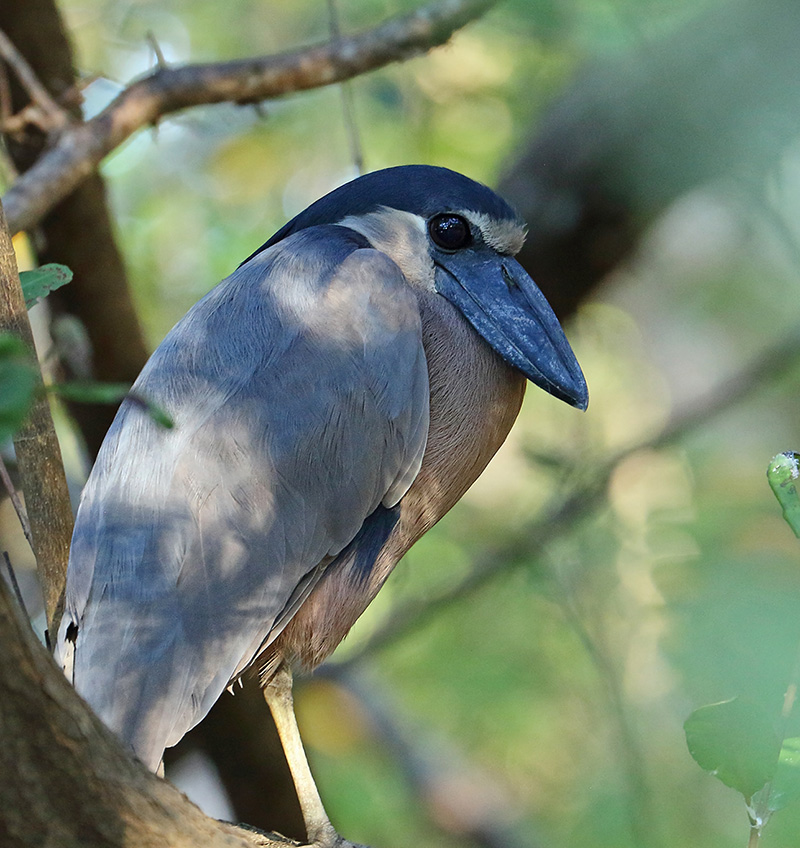 Moving further into the mangroves we had osprey, roseate spoonbill, green heron, juvenile pelican. Overhead I spotted a couple of raptors and fired off a few shots in hope rather than expectation and whilst the shots are rubbish they clearly identify the bird as plumbous kites by the red underwing. 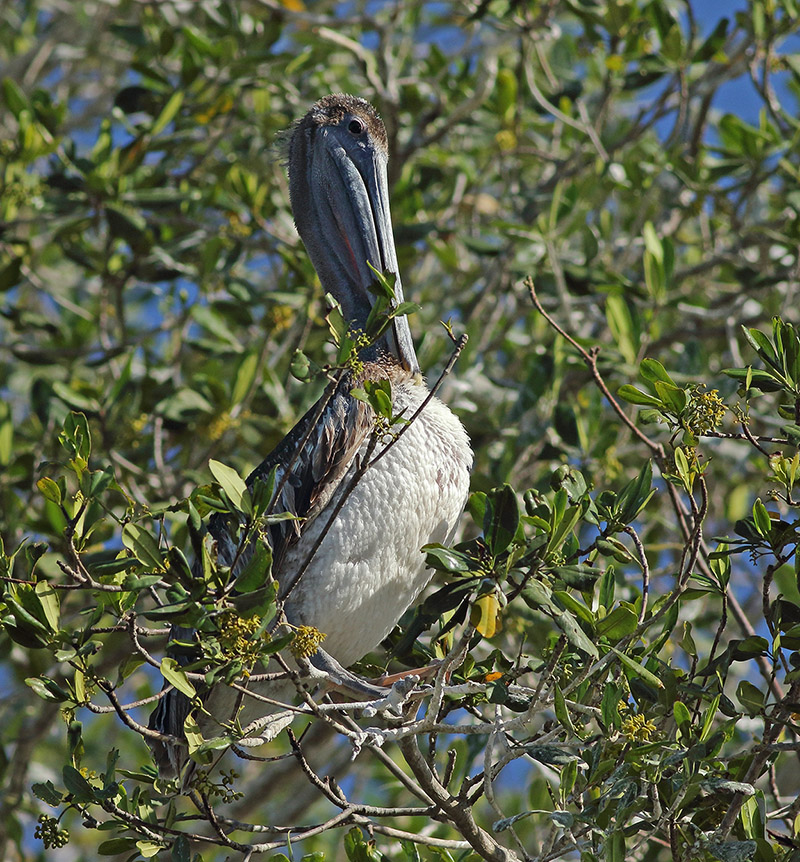 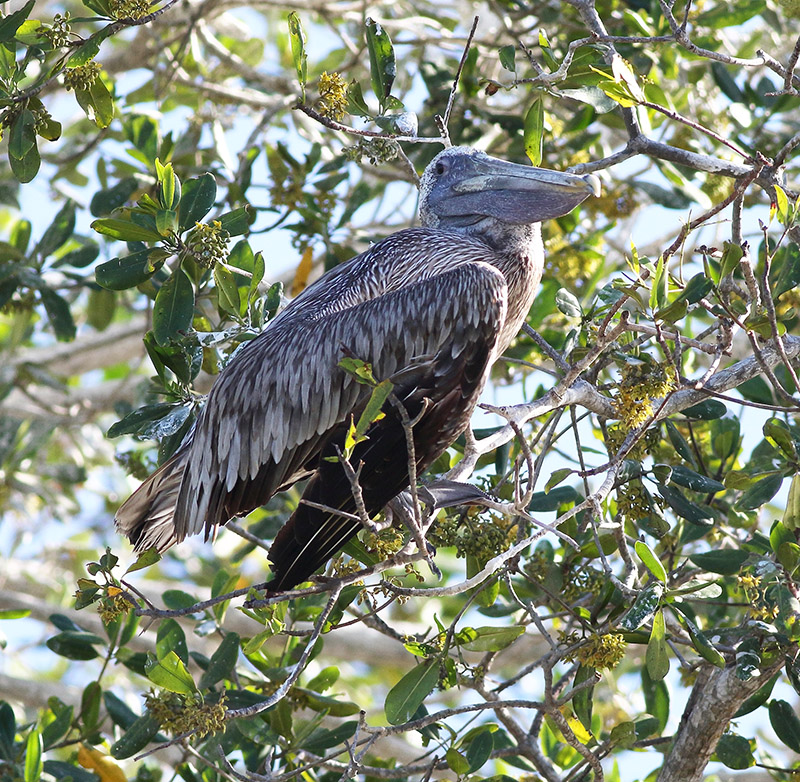 We then went quite a way up a narrow channel and the boatman put the boat into the bank and held it there by holding onto some branches. Vic and the boatman scanned the bank but it was the boatman's son at the stern who spotted the target - a mangrove hummingbird. Eventually after few  minutes of direction everyone was on it and I'd even managed a few record shots. 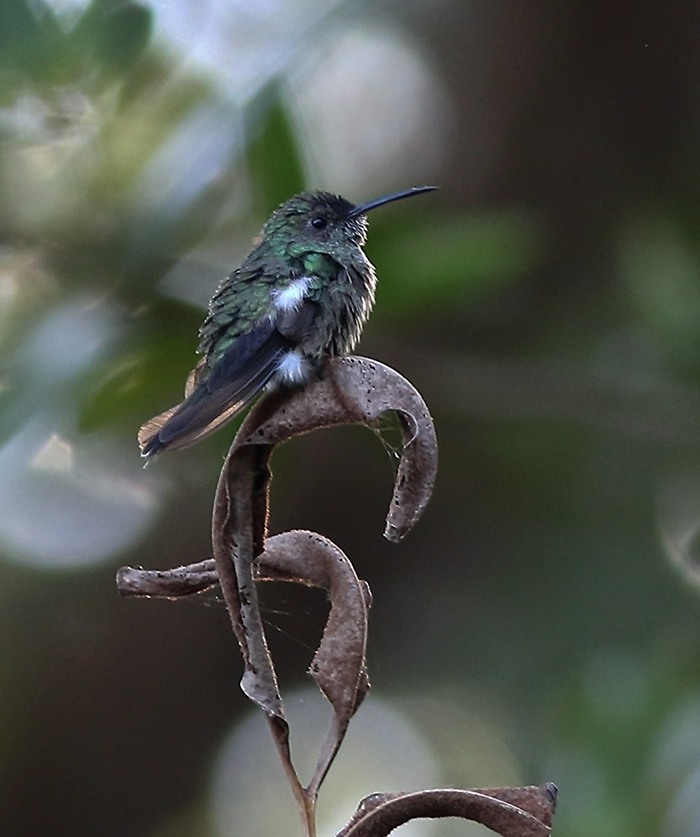 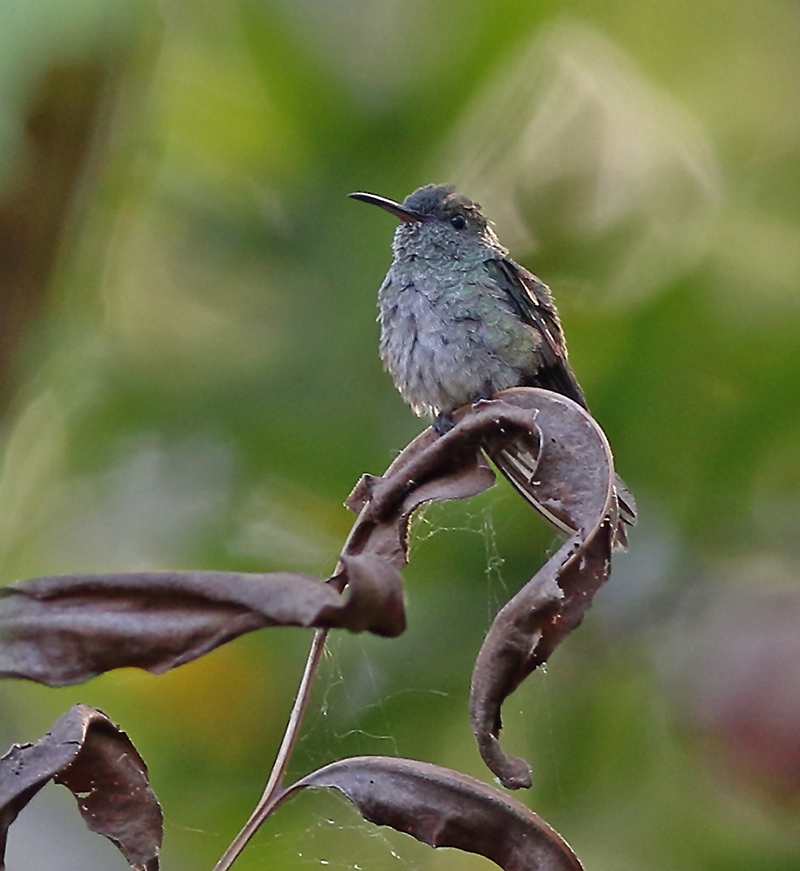 As these are quite scarce and due to habitat loss and restricted range (Costa Rica mangroves really) they are regarded as endangered.

After this we made our way upstream seeing a number of herons species and getting superb views of a pair of roseate spoonbills. 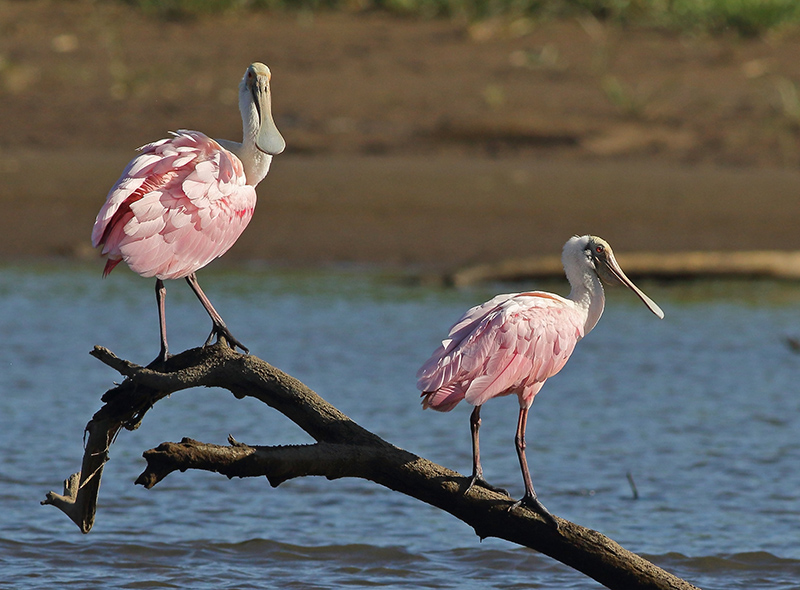 Eventually as the river narrowed we stopped and Vic and the boatman started whistling.  Soon we had several yellow-headed caracara and a turkey vulture within a few yards of the boat as the threw out small pieces of what looked like chicken. 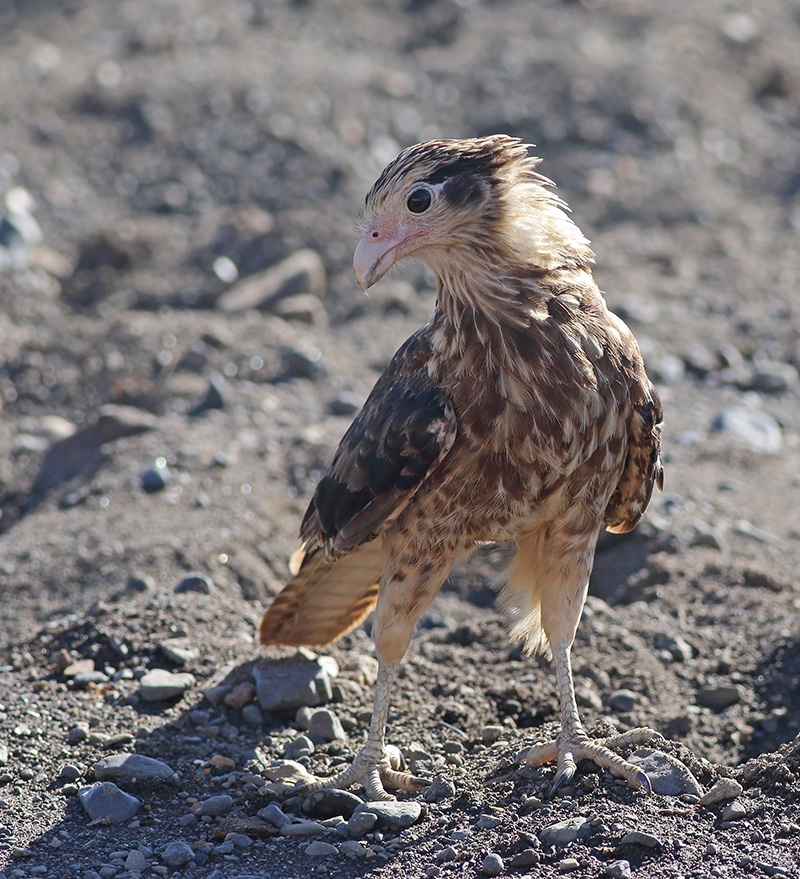 All to soon our time was up but even on the way back to the dock we were picking up new species.

We had only seen crocodile distantly during the boat trip so when it was over we popped up to the Tarcoles bridge. There were plenty to see. 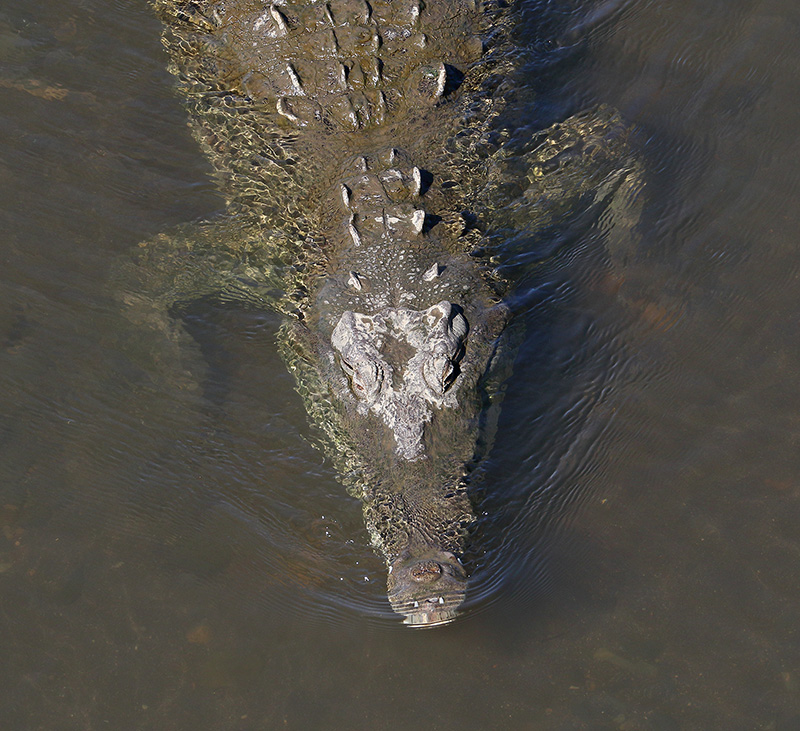 Then it was back to hotel in time for breakfast.