I’ve not posted anything since the Antigua report. There has been a reason for this tardiness – I’ve not seen anything worth reporting nor have I managed to get any reasonable images.
Today continued this run of mediocrity.
Restharrow scrape was much as it has been for the last week or so - the oyster catchers still have 3 chicks (doing a lot better than the lapwings) and the little grebe chicks are thriving. A redshank has been around for the last day or two and a lapwing has laid eggs again – this time the nest is completely exposed on the mud of the main island. There are a least 2 eggs - I watched the incoming bird turn them. A corn bunting came in for a wash and brush up but otherwise it was shelducks, mallards, coots and moorhens.
After the scrape I went out onto Worth marsh where I saw/heard 3 cuckoos (but not the hepatic of last week – reported in the SBBO update), 1 marsh harrier, 2 bullfinch (by the train gates) and a yellow hammer (also at the train gates). The yellow hammer was bathing when I found it which after it had finished retired to a nearby bush where I managed a poor shot.
There were 2 lesser whitethroats along the Worth track but try as I might I could not get a decent picture of either either.
On the warbler front the common whitethroats are still around in good numbers (23 seen) as were reed (19) and sedge(8) warblers. I also heard 3 Cetti’s calling – I’m sure there are more of these this year.
On the return leg I found 2 very young dunnock on the footpath. As I stood photographing them they hoped right up to my feet all the time calling to the parents. At one point I laid on the track to get a low angle shot but the angle of the light was not right and overall the results were a bit of a disappointment. Still, I think they look a bit like Patrick Moore. 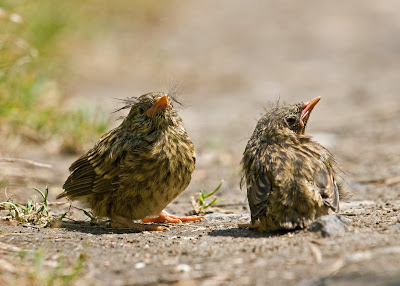 Eventually I had to move on but getting past them proved a problem – they couldn’t fly so couldn’t go into the bushes, they just hopped along in front of me. Eventually I gave up the stealthy approach and simply ran past them.   I then shooed them back to where they started. Hopefully the parents will keep feeding them.
On the insect front I found a painted lady out on Worth Marsh and a scarce chaser along the Worth track – the first I’ve seen out there this year.
This afternoon I had to go to Dover so I dropped in at Kearsney Abby. Eventually a grey wagtail turned up but didn’t hang around too long – it spent most of the time on the roof of one of the houses on the opposite side of the road singing. I’ve been down to see the grey wags 2 or 3 times now and I have yet to see a black throated male. I don’t know whether the bird I am seeing is a female or a year old male who hasn’t developed a black throat.
The only other noteworthy observation was of a pair of mistle thrushes; they seemed well established in the park.
Posted by Greater Kent Birder at 21:43