Saturday 21st Last day.
I went out to out to Devil’s Point again today (no choice really as the car was gone). As I passed the beach/beach pool I flushed a great blue heron (I assume it was the same one I’d seen earlier in the week). The buff-breasted sandpiper was still on the point with the semi-p’s but without the car I couldn’t get near enough for any pictures.
The wind was a little stronger this morning so I’d hoped the sea watching would be a little more productive.
Sooty terns went past continually (64) as did roseates (15) and a couple of least terns. I managed a couple of shots of the roseate and although they won’t grace the walls of a gallery they show enough to confirm the id.
2 American oyster catchers dropped in on the other side of the bay and wandered round on the limestone pavement for ~ 30 minutes but we too distant to photograph.
One reason for continuing to grace Devil’s bridge was due to my hope of seeing a tropic bird so anything white was scrutinised with great interest. Hopes were raised then quickly dashed as a sea-going cattle egret flew past and landed on the point!
Throughout the sea watch I had been looking north because the wind was from the south east and everything was flying into it and towards me.  However from somewhere behind my right shoulder, hence flying downwind, something white flashed past, started heading into the bay changed its mind, turned back into the wind then shot past out to see never to be seen again. The whole thing had only taken a few seconds but I had seen a red-billed tropic bird and managed some crappy pictures. I just wish I had seen it coming.
That signalled the end of my sea watch and I went off for breakfast.
We weren’t flying out till 4 in the afternoon so the rest of the morning was spent on the beach where I amused myself photographing fishing pelicans. 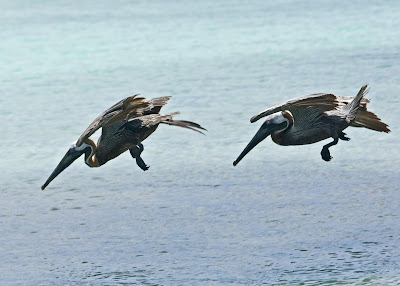 They often synchronise their fishing efforts with their synchronised diving being as good as any seen in the Olympic Diving pool. They were also continually pestered by laughing gulls trying to nick a fish or two.
Conclusion:
We chose Antigua primarily because it was where we honeymooned 25 years ago but as a destination to combine a beach holiday with some birding for a novice to the West Indies it really delivered.
In total I notched up 60 species 48 of which were life ticks and from a photography front I couldn’t have asked for more.
From my reading of other reports on birding in Antigua it would seem that a lot of the migrants species had already moved on with waders and ducks being very thin on the ground - though having said that I still managed to see 8 species of wader.  Being on the east of the island may have been a bit of a disadvantage (the major wetlands being on the west) however the hotel beach and it’s tidal pool, the mangroves and mud at Parham and sea watching at Devils Bridge were not mentioned in the other reports I had seen and provided a lot of the more interesting birds. The other real (and pleasant) shock was the heronry in St John’s –  just follow the ditch running down Tanner street!
All in all a great 10 days.
Posted by Greater Kent Birder at 21:36