Not much time today so I went to South foreland to look for ravens and peregrines. On reaching the cliff tops by the lighthouse I checked out the kittiwakes – only a few could be seen on the ledges but a lot more could be seen going to and from the cliffs a little way north and a raft of 35 were on the sea,
As I walked south towards the ravens a few swallows moved past but the only other birds seen were a pair of mippits and a few skylarks (I’m ignoring the gulls and fulmars).
As  I approached Fan Bay I could hear a raven calling and once I was there it was easily seen on the southern rim of the bay. The second was then found perched on the cliff top on the north side. The two did join up on the north side at one point but one disappeared south whilst the other flew back and forth along the cliff top allowing some decent pictures to be obtained. 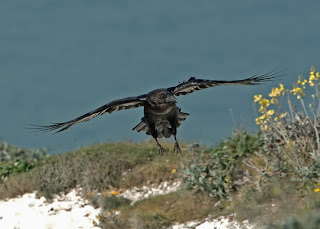 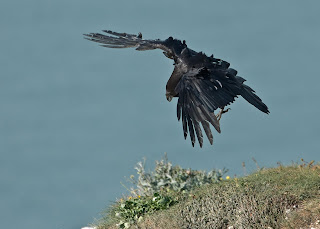 The walk back to South Foreland was as uneventful as the walk out but as I approached the light house bird flew past calling in which the whole front end was  red. I thought I knew what it was but couldn’t locate it despite it calling the whole time. I’d given up and was near the car when it flew into the small wood adjacent to where I’d parked the car.
I went into the wood but couldn’t see it despite knowing it was only 20-30 yrds away – then it flew past me out of the wood. However another one was still calling in the wood and 30 seconds later that one flew past. The second one landed in the hedgerow near to the lighthouse and eventually I found it and managed some pictures. The fiorst was taken whilst it was in deep shade but it did come out into the open for a few moments where it could be seen eating the growing tips of the holly. 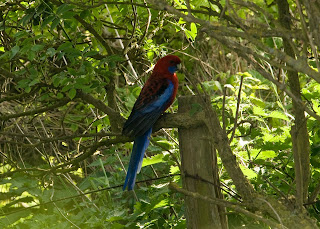 Posted by Greater Kent Birder at 17:05