All Quiet on the Eastern Front

This w/e I have been mainly decorating, only popping out for the first couple of hours of the day to try and see something interesting. Today, as yesterday, I started at the old rifle range Kingsdown for a bit of sea watching. Now I am the first to admit that my prowess at this activity is not high and anything very distant just has to be ignored. Still if you don’t try......
As I walked to the southern end of the rifle range to take up my position the resident male kestrel flew past and landed on the cliff face not too far away. Most of the time he just sat there preening though he did have the odd glance in my direction as I clicked away with the camera. At one point he spotted something on the cliff face (an insect I assume) because he picked something up before resuming his ablutions. 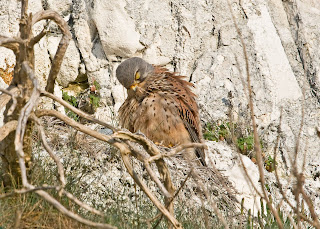 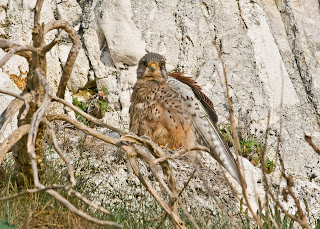 Sea watching was a bit slow and in the hour I was there 10 scoter, 8 gannet, 1 pomarine skua, 7 barwits, a very distant diver and 2 equally distant terns went past. This was a similar mix to yesterday where in 2 hrs I had 3 gannets, 5 poms, 1 other skua sp, 2 divers (black throated?) and 26 Sandwich terns. Plus of course countless distant things!
I then went to Sandwich and sat around at Restharrow. Pretty quiet really. The Canada goose and oyster catcher are still “sitting”,  a dunlin flew off just after I arrived and 2 common sandpipers were active, chasing each other around between feeding on just about every bit of bank there was. This mobility was useful because it allowed both in-flight and well as static shots to be taken. 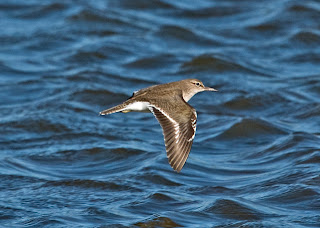 I did pop into the Obs to see what I had missed over the last couple of days and the list was considerable! Wood sandpiper and Temminck’s stint on Worth marsh (on the RSPB bit viewable from the Pinnock Wall), a Montagu’s harrier (this was reported on Birdguides but it seems this one was a ring-tail, not the male of the previous few days) and a purple heron up on the 100 Acre Field. Not a bad set really – c’est la vie.
Posted by Greater Kent Birder at 16:14