Friday 29th.
On my way to the obs this morning I stopped off at Restharrow to check for small waders – it’s about time  a stint showed up – preferably aTemmincks. Well no stints but Steve Raynaert was there as were 2 redshank and the normal residents. After a few minutes a spotted redshank appeared. Whether it had previously been hiding or it had just dropped in we didn’t know. Unfortunately it didn’t stay long and only a few record shots were obtained. The local wader spots (Restharrow and Backsand scrapes) can be pretty good for autumn spotted redshanks but seeing on in summer plumage is unusual. Now I need to get close to one and get a decent image.
At the Obs the decision was to walk the estate – the wind had dropped so any idea of a sea watch was abandoned.
A lot of common whitethroats were in the “Oasis” paddock but little else. As we arrived at the sea front Ian got a call from Phil Milton saying the Montagu’s Harrier was over the Point again and after a  5 second discussion we decided to walk up and see if we could find it.
The beach had a bit more than the last time I walked it – mainly skylarks but a few mippits and linnets and there was a trickle of swallows moving north. We also found a female wheatear and a lesser whitethroat in the little remaining buckthorn.
Once at the 100 acre field we took up station by the gate and scanned north. Within a few minutes Ian had spotted the Monty’s dropping into the long grass on the northern edge of the 100 acre field and eventually I had latched onto it.
For the next 10 minutes or so it just flitted about but most of the time it was invisible. I tried toget some shots but due to the distance they were pretty poor though you could just about saee that it was a Monty’s. 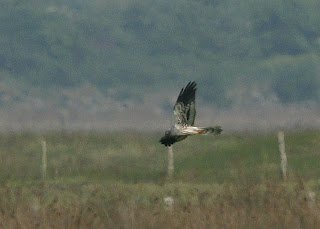 Ian phoned back to the obs with the news and we knew 4 more were on there way so we decided to not try and get too close. However we did move ~50yrds into the field and hid behind several very large clumps of tussock grass.
For the next 20 minutes or so the bird remained largely invisible hidden by the long grass so Ian set about looking at swallows passing through (one of the best movements for a few weeks) plus a couple of whimbrel and wheatears.
Eventually the bird took off again and after a few seconds of flying about started to come towards us. By this time I was looking at it through the view-finder clicking away and it got closer 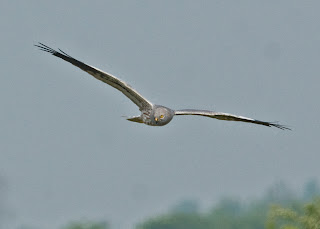 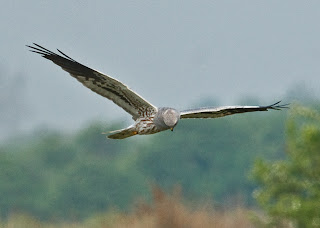 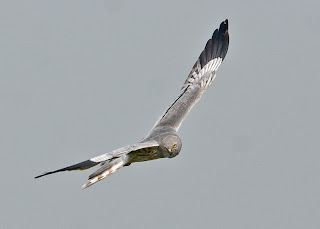 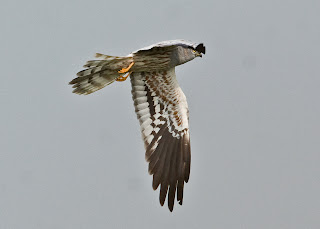 After turning it went away to what I assume was 70 or so yrds and continued hunting. 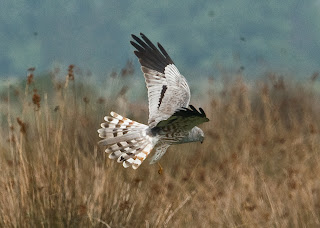 I’m sure it must have seen us but didn’t seem to mind our presence.
After this we made our way back to the gate to continue watching and wait for the others.
They finally arrived and the bird continued to perform. It liked the far end of the 100 acre field best but then would go over the beach and fly along the shore line, past where we were standing then turn inland, over Princes golf course and return to the 100 acre field. It this twice whilst we were there.
Whilst we were watching the Monty’s a ring-tailed hen harrier turned up. At times it was very close to the Monty’s so you could appreciate the differed jiz of the birds. The hen harrier having a far more rapid wing beat and being much heavier looking.
It would have been nice to get a picture of the two together but I’m happy with the pictures I managed
Posted by Greater Kent Birder at 06:24