Today, as with most days, I walked the circuit at Sandwich with Ian  first thing with mixed results. There was precious little around in the way of migrants – just a few chiffchaffs and blackcaps in the bushes, a few linnets going north, a couple of hirundines and 6 wheatears. However on the upside we found a nightingale in the “White House”(an area of scrub/trees normally reserved for the ringers and their nets) with a second in the Cellars. These were patch ticks for me but they didn’t really make up for the mediocrity of the rest of the session.
By 11.00 I was off home but when I arrived there was no sign of my wife. A quick phone call later and after being called a dozy old fart I was told it was Wednesday and not Thursday............it’s not so easy to keep track of these things when you are retired!!!!!
Anyway after an early lunch I went out again, walking the cliffs from Kingsdown to Hope Point hoping for something interesting in the bushes or, if nothing else, a passing peregrine to photograph.
Well it was as quiet as Sandwich. In the scrub by the golf course club house there were several blackcaps singing and one or two chiffchaffs chiffing  and further along there were a few linnets plus a pair of meadow pipits but that was about it.
I wondered whether to go inland for the return journey or to retrace my steps along the cliff top but I decided on the latter mainly due to the prospect of a peregrine to photograph. On the walk back a flock of about 40 hirundines flew past (house martins and swallows) but they immediately disappeared south then as I approached the golf course car park I spotted several others.
After a quick scan the panic set in – was there a red rumped swallow in amngst them? After a few minutes I'd convinced myself there was and when it came low towards me I had the camera and click click and I had this picture:-
At first I thought they were going to disappear south just as the others had done but they milled around for a few minutes so I contacted Birdguides then Tony Morris (another retiree) with the news.
It was after this call that I started to wonder whether there were actually 2 red rumps present but eventually it was clear there was. From the picture above and the one below you can clearly see that there are 2 different birds because one of them  is at a different stage of moult from the other – see the primaries. 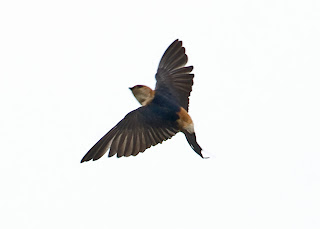 For the next 30 minutes the red rumps, along with a few swallows and house martins ranged from the golf club car park to about  500 yrds south over the crest of the hill but would often disappeared inland over the golf course itself and out of site. Then came the search to relocate them.
Eventually Tony and Jack turned up just as the birds returned from one of the forays inland. It was good that someone else had seen them though I had the photographs to prove I had seen them to any doubting Thomas’s.
For the next half hour the birds moved back and forth though again occasionally disappearing inland but everytime they returned a few more pictures were obtained. 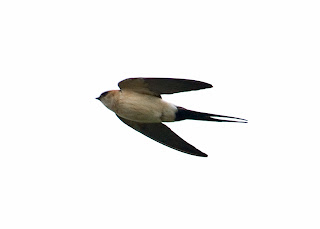 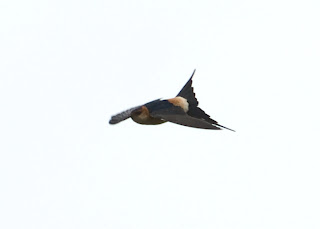 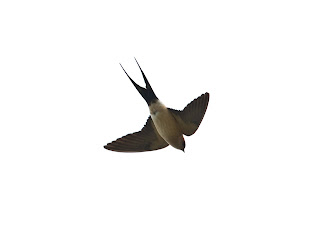 There is sky in these pictures but it was white/offwhite; would have been nicer with a blue background but I'm not complaining.
The birds were still there at 3.00 but soon after they disappeared inland for the umpteenth time and we all left.
A nice way to end the day I.
Posted by Greater Kent Birder at 17:29