Sunday at Grove and my first cuckoo

I could stay out most of the day today so I went to Grove, arriving at 6.30.
First stop was the ramp where it was obvious that the water levels are very high and there is no mud  and consequently no waders. The ducks and grebes seemed to like it though with mallard, tufted duck, gadwall, shelduck, great crested  grebe, swan and grey lag all being seen. In the reeds and bushes there were loads of sedge, reed and Cetti’s warbler plus robin and wren.
I then went to the river hoping for a grasshopper warbler but it was not to be. I did however immediately hear nightingales (3 in total) and found several common whitethroats. I walked the river bank to the track leading to Harrisons seeing blackcap, chiffchaff and I hearing  my first cuckoo of the year. This bird called until about 8.00 when it went silent and wasn’t heard again.
I left the river back and walked along to Harrison’s hide but this largely a waste of time. On the pool itself (and there’s little or no dry ground to be seen there now) there were a few duck with teal adding to the day list and along the footpath and in the adjacent pasture there were skylark, mippit and a few reed bunting.
I went back to the river and I was lucky enough to get fleeting views of a kingfisher and green and great spotted woodpecker were heard.
The water meadows looked superb but try as I might I couldn’t find a garganey, the only inhabitants being the more common ducks and grey lags. A yellow wagtail flew past but I saw none on the ground. Also from the water meadows I saw my first marsh harrier of the day.
Further along,  and as I approached the main lake, the number of blackcaps jumped significantly and I added tree creeper and little grebe to the day list.
The main lake held the a few ducks, including shoveller plus a good number (10+?) great crested grebes but no terns as yet.
Alder wood didn’t add anything to the day list but blackcap and chiffchaff numbers were in good voice..
For the first part of the day I was more intent on birding than photography my thinking being that there will be ample  time to get some warbler shots later in the day. Well by the time I started looking for photographic subjects it had gone very quiet – with my only picture being of a butterfly! 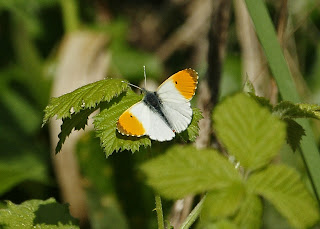 At the Marsh Hide I found Steve Ashton and a little later Mike |Gould wandered in. The garganey of last week seemed to have moved on and all there was out on out on the marsh were teal, coots, and grey lags. I did add to the day’s wader list with snipe and redshank and a few marsh harriers were seen but none came very close.
Birding-wise it was pretty dull all in all.
The only real photographic opportunity was presented by a lone reed warbler who sang close to the hide. Even he was difficult to photograph as he remained behind the reed stems most of the time. Fortunately now and again the breeze moved the reeds so that most of the bird was in view. 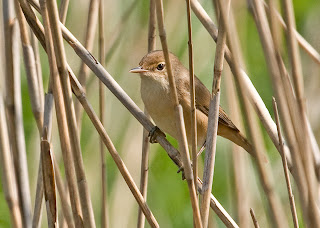 And that was about that really – on the upside there was kingsfisher, nightingale and cuckoo, on the downside no gropper or garganey. I ended up going home a lot earlier than I had envisaged – sad really on my first free weekend for a long time..
Posted by Greater Kent Birder at 23:54