Today I had a day out and about in “Greater Kent” as I took in Dungeness and Rye. It was about time I went down that way as I’ve not been down there since January. It was also time to get away from the local patches.
I arrived at Dungeness at 7.15 and went straight to the “Patch”.
There were already 3 people already in attendance and they told me I had already missed 40-odd little gulls going through (one of the hoped for species) but the movement had stopped (typical).
On the sea were ~ 10 great crested grebes and way out in the murk you could just make out 4 or 5 gannets feeding. The patch had a reasonable head of terns and gulls but no little gulls.
On the migratory front a few things were moving east but the highlight wer the scoter - during the 2 hrs I had there 59 went east 4 of which were of the velvet variety  (a year tick). Other ducks moving through were 4 teal, 8 shoveller and 6 other things that someone suggested were scaup. They did have white around the face but it was pretty murky out there.
On the sea itself were 3 eiders that I first picked up west of the Patch but they quickly drifted/swam east past us then disappeared.

After about 9.00  it seemed to go quiet and it was getting more misty so I packed up and went inland (though I later learned that I had missed 4 little gulls, 1 bonxie and a Pom).
As I walked back to the car I came across a male black redstart singing away for all he was worth on the power station wall but I only managed a record shot.
I tried to relocate him but failed and  I pestered several linnets  instead.  2 wheatears were also flitting about.
Once I had enough of chasing linnets I went up to the fishing boats to look for the glaucous gull – one of the main reasons for going down.
I have already seen and photographed the glauc but that was in the depths of winter and the light was shite. In fact most of the photographs I’ve seen were taken under pretty gloomy conditions so I thought it deserved it’s hour in the sun. Also I (and others) are always moaning that rarities never hang around; well this one had but I for one had ignored it.
Anyway I walked along the concrete road towards the beach/fishing boats and as I crested the final shingle ridge there was the glauc – right in front of me!
I fired off some quick shots but it flew off and landed on the bow of a fishing boat.  On the shingle you can hardly sneak up on something so I dropped down on to the tide line and slowly started walking towards it – my reasoning being that as I was well below his eye-line I wouldn’t appear such a threat.
Well it seemed to work and I came within 20 yrds of  the glauc snapping away the whole time. 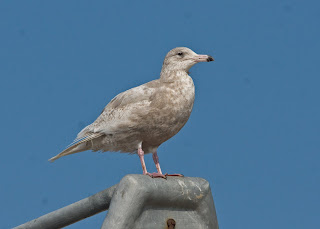 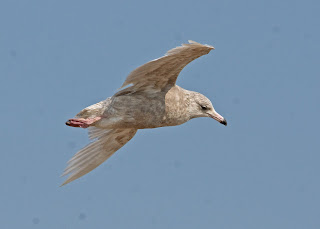 I had just started to back away when it decided to fly a short way along the beach so I managed some flight shots as well.
As I walked back along the beach it flew past me then turned and came back – I took some more pictures but these were looking into the sun and were of pretty poor quality. However from  them you can see just how tatty the bird still is. 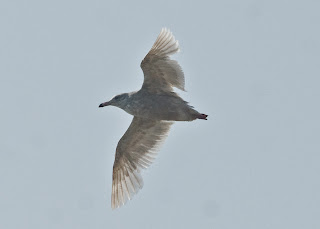 Next stop was the RSPB. Here the sedge, reed and Cetti’s warblers were all in good voice and half a dozen common whitethroats were also seen but no sign of a lesser whitethroat. Only the sedge warblers would cooperate:
Several marsh harriers were seen during the circuit but always at a distance. There was also a cuckoo calling distantly but I never saw it.
Since it was still only just past midday by the time I had finished the circuit I decided to have a quick look at Rye Harbour.
The reserve was pretty busy what with visitors (most were not birders) and the excavation work so I saw little of note on my way to the Crittal hide.
From the hide you could see a lot of Sandwich terns, a few commons terns plus hoards of black headed gulls. On the shore line to the right of the hide was the roost of oyster catchers one of which came to feed right in front of the hide:
I then went to the other hide on the ternary pool from which I could see the med gulls and a few more common terns and this time there was a redshank feeding in front of the hide – unfortunately I was facing the sun so the pictures suffered a little.
My final stop was in the new hide that overlooks the “Quarry”. From here there were more common terns and in the distance a number of waders – dunlin ( most being black under), knot and grey plover  (both still in winter plumage) and 2 bar-tailed godwits – one in summer and one in winter plumage. None came close thins time.
The only other bird of note seen at Rye were avocets - most shallow pools seemd to have one or two.
On the way back to the car I spotted the long staying merlin which put everything up without, as far as I could see,  trying to attack anything. It was a nice way to end an enjoyable day.
Posted by Greater Kent Birder at 23:15