All Quiet on the Eastern Front

I only had a couple of hours today so I stayed local and walked the cliffs from Kingsdown to Hope point. The weather was great – the sun was pushing through the hazy cloud and there was hardly a breath of wind so although the air temperature was pretty low at first it didn’t feel cold. Unfortunately the bird remained hidden (or were absent) so all in all it was a pretty uneventful walk.
The scrub by the golf club was quite noisy with blue and great tits, chiffchaffs, wrens, blackbirds and wood pigeons but everything was distant and/or invisible and the further south (towards St Margarets) I went the quieter it seemed to become. In fact the only thing occupying the scrub were a few whitethroats (new arrivals) and the local linnets.
As I approached Hope point things started to pick up with a few long-tailed tits prompting me to get the camera out. I spent about 15 minutes waiting for one to show but they refused to come out to play.
Just after I had given up I spotted a peregrine coming towards me from the south. It was pretty high but you can see from the pictures it’s an immature bird  - perhaps the same one Tony Morris photographed a week or so ago.
The only other birds of note were 4 swallows and a lone yellow wagtail – all going north.
For those who don’t know the area very well here’s a picture of Hope point (the lowest point in this picture and the area with the most scrub) and in the distance you can see the Bockhill monument. The Bockhill guys normally watch from the cliff top just north of the cafe (just about visible in the picture).
One of the nice things about this walk is that if the birding is not good (and it often is despite the fact that a decent number of rarities turn up) the views are always superb.
I had 2 whitethroats on the way to Hope point but at the point there were 4 or 5 more so I set about trying to get a decent image: 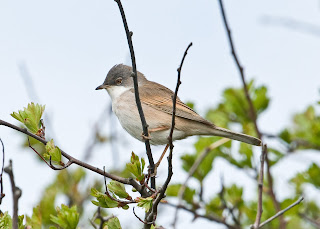 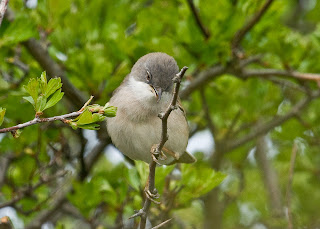 It took a long time but all’s well that ends well.
Also at the point were 20+ linnets, a few chaffinch and a couple of mippits, one of which landed close by.
The walk back was as uneventful as the walk out. I did keep checking the cliff face in the hope of finding a peregrine perching but no such luck, the only thing showing on the cliffs were the fulmar and the resident jackdaws.
One final thing. I saw several of these bugs though I hav no idea what they are - the feet are pretty interesting.
Posted by Greater Kent Birder at 20:19