A general moan and a Scrape update

For those who might have been wondering I have been going out to try and find something to photograph but since Bempton I’ve failed to find anything much to point the camera at and if I have the pictures have been rubbish.
Several times I’ve gone looking for spotted flycatchers in their normal haunts but unlike Mr Ashton I can never find them. I’ve been to Oare several times to try and get some shots of black tailed godwits in flight but no matter what the state of the tide they are always on the island and fast asleep. Heaven only know when they feed. For this weeks visit I arrived to be told some juvenile bearded tits HAD been showing really well most of the morning........always nice to be told what you have missed. Needless to say they stayed deep in the reeds whilst I was there and I failed to get a single shot.
I went back the next day at 7.00 am because I'd been told they showed best early morning.......well they didn’t.
All I got for my 2 visits (32 miles each leg so 128 miles in all) were a few sedge warbler and reed bunting shots, oh and a shot of a distant ruff in breeding plumage. 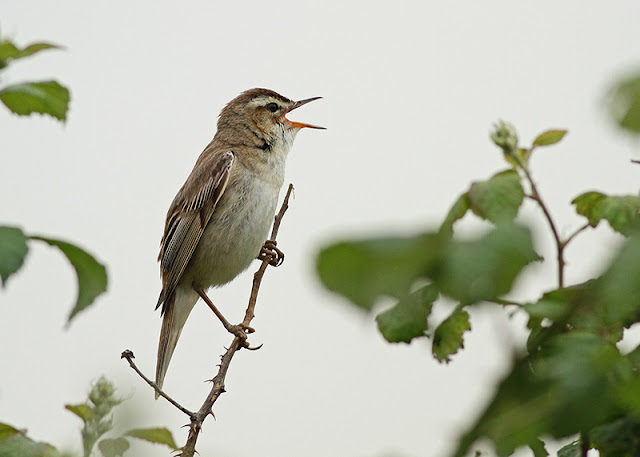 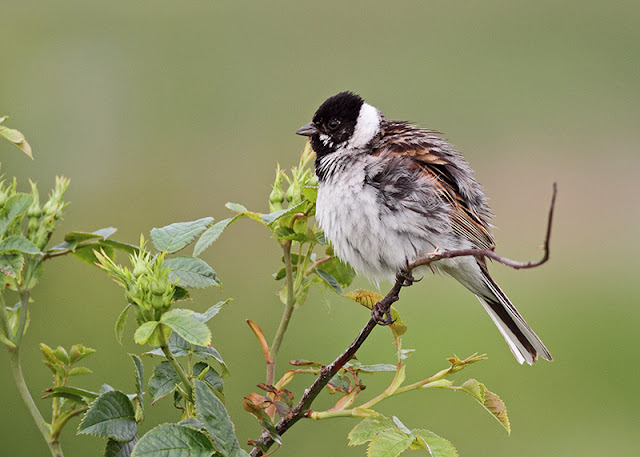 I think I need to go out less and twitch a bit more - certainly a day trip to the Isle of Wight (Wilson’s Phalarope) would have provided a better return on investment as would the American golden plover a few weeks ago.
The ruff was rather interesting in that it looked like an aging film star and carried as much bling - coloured leg rings and a blue flag; I’ve tried to find where it originated but the web site has defeated me but here’s some pictures of it. 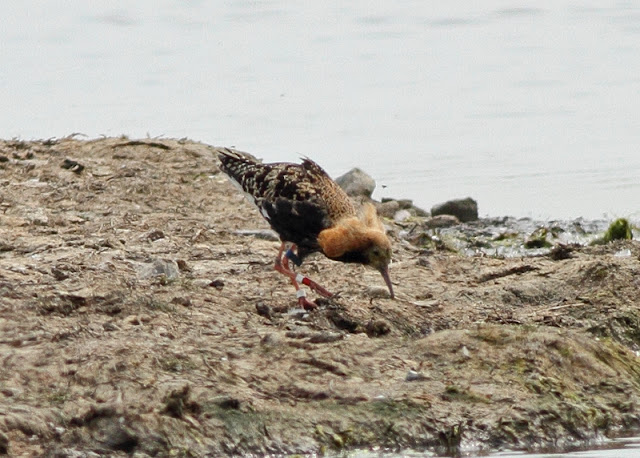 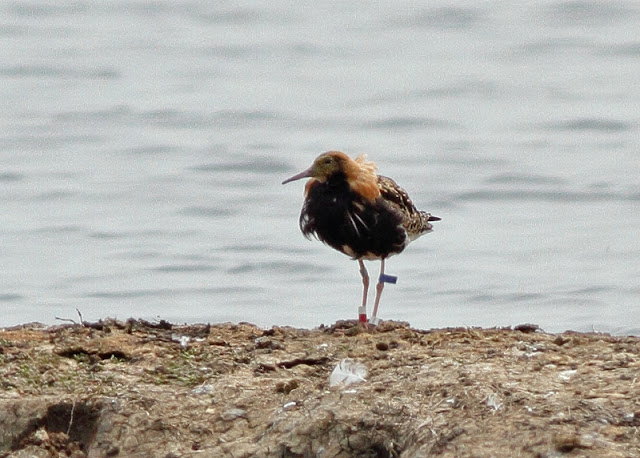 Backsand.
At the moment the water is still too deep and all that’s there are a few ducks – hopefully it will be pumped in the next couple of weeks.
Access via the normal route is not allowed during the normal working week but Ian tells me the normal route down there can be used of a weekend when no one is working. Access is possible during the week but you have to go out towards Princes reservoir, follow the track around the sea-ward side of the reed filled pool (Newdowns New Pool) and take the track north. This track will eventually lead you to the metal gate on the river bank near Backsand but there are others tracks that branch off that are dead ends so beware.
I’ll try and get hold of a map and mark the route and post it here.
Restharrow
For anyone thinking of visiting Restharrow Scrape it is not at its best at the moment with grass and reed taking over the place. The vegetation that can be reached from the bank will be cut sometime but the presence of young lapwing (3 ), oyster catcher (1) and nesting little grebes preclude cutting at the moment.

Posted by Greater Kent Birder at 16:55