Since returning from Bempton I have been scratching around East Kent trying to find something to photograph......or should I say trying to find anything to photograph. I’ve failed. Several times I have gone looking for spotted flycatchers but no luck despite the fact that Chidders and Martyn found one.
Given a favourable weather forecast today I went to Rye Harbour. Now don’t get excited, I didn’t go to Castle Water (hadn’t planned to) nor did my Birdguides text alert inform me of the golden oriole so that's a bird that remains absent from my Greater Kent list. (Which by the way has only been troubled twice this year – the Eastbourne Bonaparte’s and the ruddy shelduck at Marquenterre. For anyone who is unclear it’s my list so I make the rules and both these places are well within the Greater Kent region..... as is Bempton for that matter).
Anyway back to Rye Harbour. A quiet walk down past Lime Kiln cottage seeing a few linnet and skylark. Most of the waders have now disappeared, as has the water, and the brand new hide looks out over a nice large patch of drying mud – I think they need to find a way of retaining a little water. Just beyond the new hide I could just about see and certainly hear the little terns calling (most are still on Flat Beach) and on the inner fence line I found a juvenile wheatear hopping around which after a few minutes was joined by dad with a small caterpillar or grub: 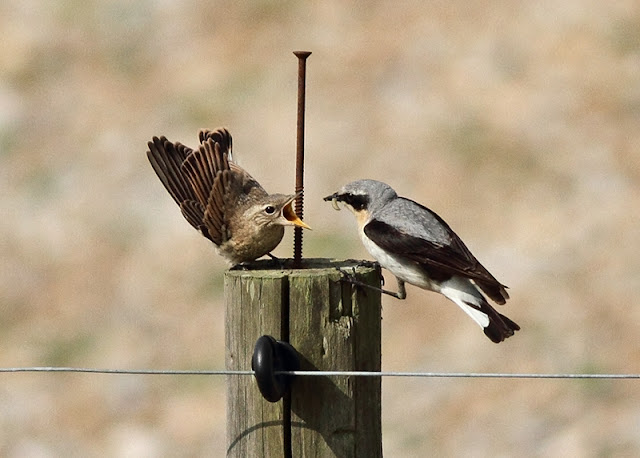 I did see wheatears 3 more times as I wandered about but only fleetingly so I don’t know whether they have managed to raise more than one chick but whatever it’s good to see them successfully breeding at Rye.
As I walked along the beach track a couple of little terns came a little closer as they chased off a kestrel, then a black headed gull and finally a couple of wood pigeons  out of their airspace.
One, possibly two, LTs seem to be nesting on the ridges 50 yards inland from the roadway (well they were sitting on the ground the whole time) and the others (those on Flat Beach) may still be having thoughts in that direction because they seemed to spend a lot of time chasing each other around.

As I walked to the hides there was little evidence of terns carry food back to their nests and that thought was reinforced when I got to the hides. I couldn’t see many tern nests clearly but those I could see clearly had the adults incubating. One common tern did have a newly hatched chick but it was the only one I saw. The Sandwich terns were more distant but again it looks as if they are still incubating.

Some of the BH gulls (possibly most) had well developed chicks some of which were even flying but there were a few younger chicks and birds still sitting on eggs...... most confusing.
﻿
I didn’t actually see that many med gull but one is still incubating on the island immediately in front of the Parks Hide.
I spent most of the morning in the Parks hide and was treated to close-up views of little grebe, redshank, and a common tern that landed right in front of me:

I did sit in the Steve Denny hide for a little while and this gives very good views of several terns on their nests and the one where the chick was seen but photographically this is a hide for the afternoon due to its orientation.
Whilst it was sunny when I arrived the sun by and large disappeared pretty quick and most of the morning was in thin cloud but approaching midday things deteriorated markedly as a thin sea mist started to roll in leaving a white sky; still ok for photographing birds on the deck but useless for the flight shots I had been hoping for (not that the terns were doing a lot of flying).
I only saw a few ringed plovers, 2 chasing each other around, a small flock of 5 or 6 flying around Flat Beach and 2 individuals feeding distantly, there were quite a lot of tufted ducks around (no chicks), and a great crested grebe was attacked by the BH gulls when it came too close to one of the islands.
So I didn’t get the flight shots I was hoping for but an enjoyable morning none the less.
Posted by Greater Kent Birder at 16:55