With the sun set to shine till after midday I got the passport out and went down to Dungeness.
I started at the fishing boats hoping for the caspian or a glaucous but no such luck. I wandered around for an hour or so checking the various gull roosts but only herrings and black backed were on offer. Along the beach I found a juvenile kittiwake and a few black headed gulls which were interested in some revolting looking entrails but they enabled me to get close and try for a few flight shots, though I have to say my skill with flight shots still leaves a lot to be desired.


Mid morning I went to the ARC. From the Hanson hide I could see tufties, a lone golden eye, teal to go with the gadwall and pochard I'd seen at the southern end and a flock of ~ 50 widgeon dropped in.
Whilst checking out the ducks at the top (northern) end of the pit I saw something white in the reeds. I assumed it was an egret but as it moved into view it turned out to be a grey heron. Normally this would be of little consequence but as it wandered to the right (as I looked at it) it disturbed a bittern that was ~ 8 yards away. I spent the next half hour watching the antics of these two.
For quite a long time they tried to ignore each other but eventually the bittern decided it wanted move left (towards the heron). To avoid a confrontation it went deep into the water and  looked as if it might actually have been swimming if not it was wading in very deep water.
As it moved past the heron the heron turned it's back to it as if pretending it wasn't there.
Once past the heron the bittern clambered out.

They refused to look at each other for another 10 minutes until the heron had had enough and it flew.............and landed right in front of me!
I had earlier joked with a RSPB volunteer that I was hoping the heron would scare the bittern over to me but I had to make do with a heron. 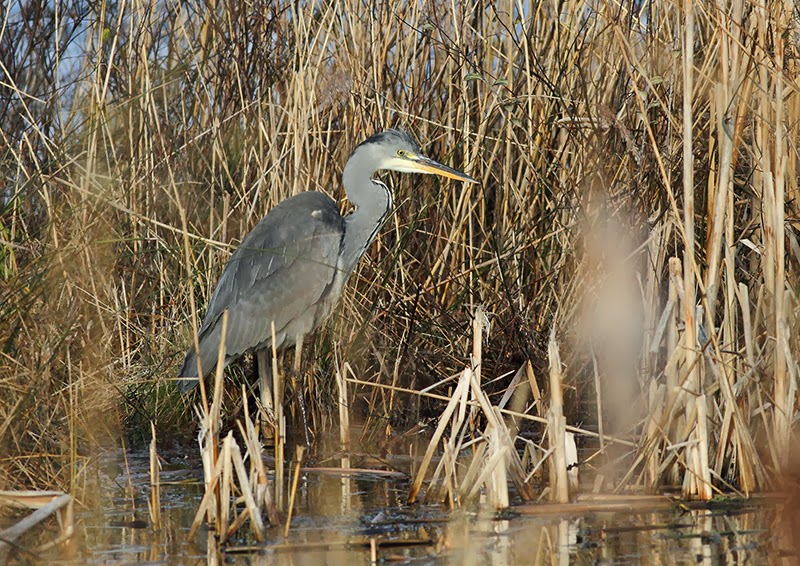 Whilst these two acted out their little drama a great white egret was also on show to their right though it kept disappearing into the reeds/scrub between the main lake and the viewing screen.

Once the heron had flown off I went round to the screen to see if I could get better views of the egret but when I arrived there I found another RSPB volunteer sweeping out the screen and cleaning the glass window totally oblivious to the great white egret walking across the front of the hide. With all the commotion (plus me opening a shutter) the egret moved behind the left hand reed bed and started fishing - so there it was only 25 yards away but I could only see it through the reeds.
After a few minutes of window cleaning the egret took off and landed 25-30 yards away to my right .....but I now was looking right into the sun! 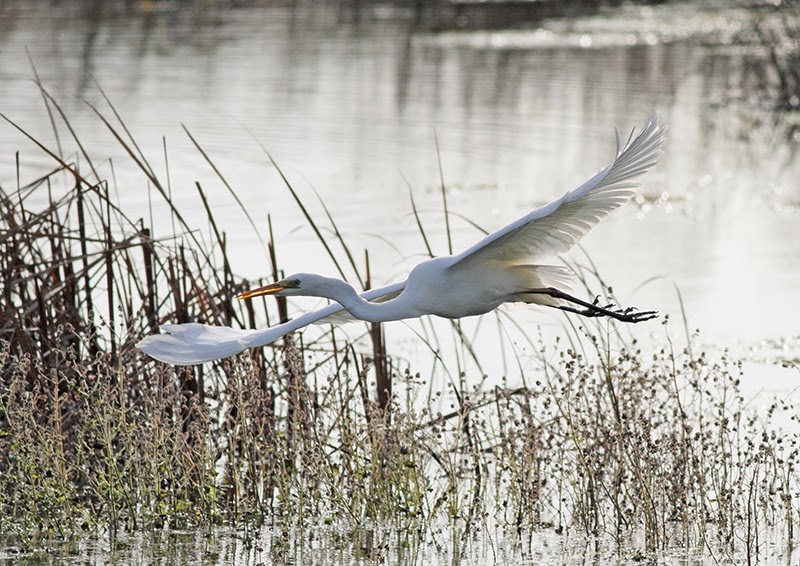 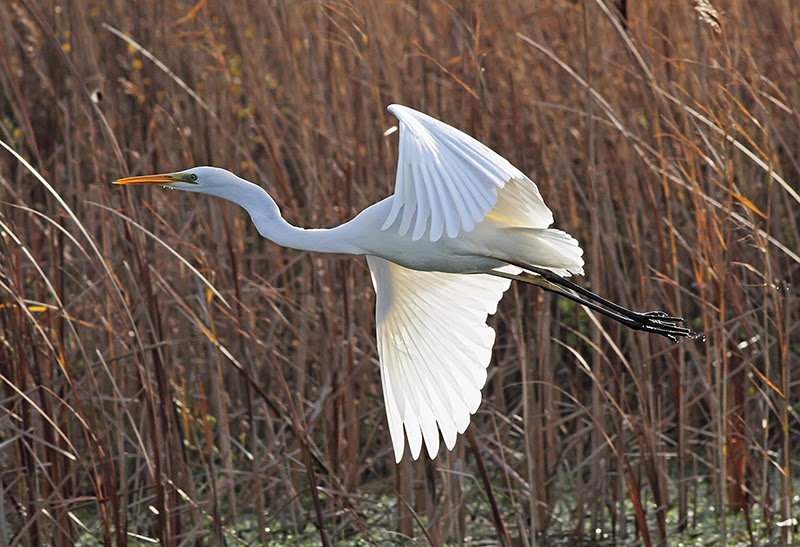 I only had time for  4 or 5 shots and whilst the light direction was not ideal the fly past was the closest  I've been to a great white egret.

And that was that. Nothing unexpected but a very enjoyable morning.
Posted by Greater Kent Birder at 17:56