With my wife due to be having a week in Tenerife with friends I had been looking around for somewhere to go where I could photograph something interesting. Eventually by straining the brain I came up with Broadsands and it's cirl buntings. I have seen cirls before but only in Spain and the few pictures I'd taken were rubbish. The cunning plan developed consisted of me taking Angie and her friend to Gatwick and continuing on to Devon. However 24 hrs prior to departure the weather forecast looked lousy. On Sunday Storm Desmond was due to hit and the rest of the week looked like wall to wall rain as well. Even on Saturday morning the weather forecasts for the week ahead were not hopeful and the forecast for Sunday were downright dire so the plan was shelved and after dropping them off at the airport I came home.
By Saturday night the forecast for Sunday was still wet and windy but with it clearing up on Monday with some hope of sun on Tuesday and Wednesday. That was it decision made and late Saturday I booked a hotel for 3 nights.
The drive down Sunday was wet and windy and driven drizzle greeted my arrival. Still I drove to Broadsands to have a look around. Within 30 seconds of getting out of the car I had seen a firecrest (possibly 2), some goldcrests and a decent size flock of siskin. I wandered to the far end of the fenced off  car park and found a group of about a dozen birders that I thought were looking at crests but I didn't linger - one of them had a dog that stood 3 feet away and wouldn't stop barking at me. The owners only comment being  "He's normally very friendly" - not a sniff of an apology.
Anyway all in all he did me a favour because I went round the adjacent car park and found the area seeded for the cirl buntings. Even better news was the car park was open so I drove over there, parked where I could have the window open (and remain dry) and waited. The seeded area was owned by a robin who continually chased away the dunnocks and chaffinches who were trying to feed on the seed but eventually 3 cirl buntings turned up and he kept chasing them as well. All were juveniles/females so I started to have doubts as to whether I was looking at cirl buntings or yellowhammers. Still I had some reasonable pictures (albeit shot at heroic ISO) and I thought I could sort out the actual id later.


Monday morning and the weather forecast was not as good as they'd suggested 24 hrs earlier.
Still I got down to Broadsands at 8.15 to have a look around. The northern most car park was now locked so sitting in the car was not an option. I loaded up and wandered over. Almost immediately cirl buntings started arriving - including males so no doubts as to the id this time. Most of the time I had 4 males and 3 female/juveniles in front of me despite the best efforts of the robin.

I hung around there for a couple of hours and at times the light got good enough to drop to ISO 400-500. Most of the time the birds were on the floor and I only managed to get them in the bushes on a few occasions but all in all I was well pleased with the results.
The buntings seem very tolerant of your presence as long as you stand still or move very slowly. Any sudden movement even when quite distant put them to flight. My most successful tactics involved being on my knees and slowly edging forward This allowed me to get within 8-10 yards.(It was a bit tough on the knees though!) The light wasn't brilliant but good enough for slow moving birds on the deck and immobile one in the bushes.


A couple of hours and 500 shots later I wandered off to look at the sea where I found 2 other birders (one of whom was guiding the group I saw yesterday in the car park) and saw 2 Slavonian and a black necked grebe and a very distant diver.
They told me of a yellow-browed warbler in the corner of the car park - this was what the dog and its owner was watching the previous day.
Anyway, several chiffchaffs, goldcrests, and firecrests later I finally saw the yellow-browed. At this point I wandered off to look for the siskins but they had disappeared. 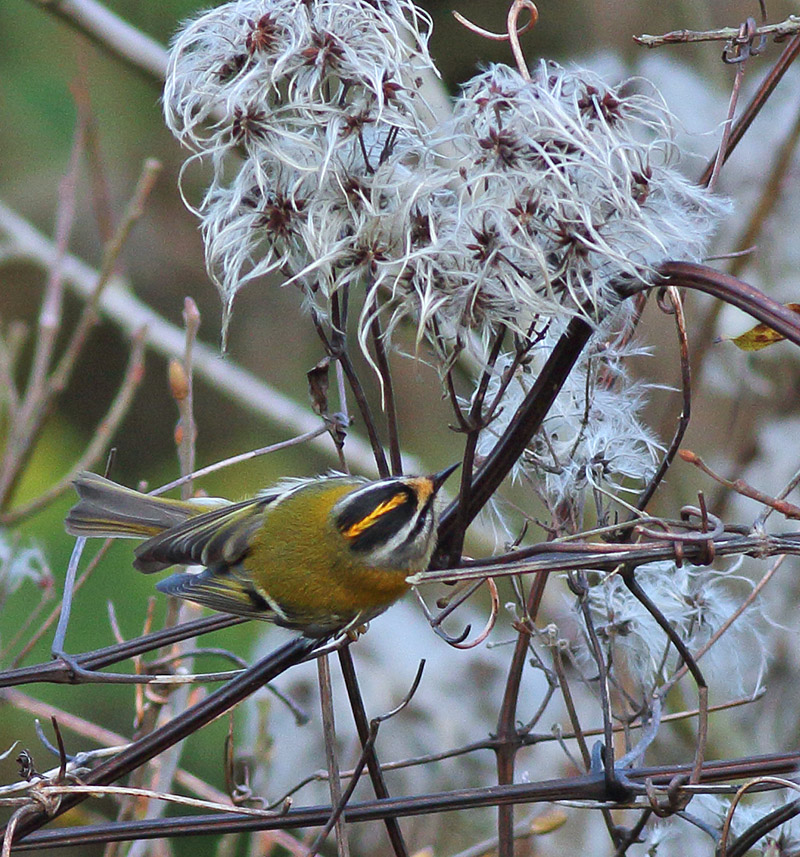 Lunch called so I went into Brixham bagging a shag on a slipway then it was back to Broadsands with the sun shining!!!! It was not all good news though because by 1.30 the corner the cirl buntings  come to is in the shade at this time of year. Still I got a few shots of them in the sun..

I returned again to the beach where I could see a couple of very distant black necked grebes (I'd been told there were about 8 out there). I have decided black-necked grebes must be lousy at catching fish as they dive incessantly for hours on end. Also seen were a few gt crested grebes then right below me a razorbill swam past and circled the bay!


That was it. The sun hadn't shone very much but it was a good day.

Tuesday was a lot brighter so I started with the cirls again. My intention was to concentrate on birds in the trees/bushes as I had a load of  shots of them on the floor. Almost immediately I had 3 females/juveniles in front of me along with several dunnocks and chaffinch. I'd only been there a few minutes when a male sparrowhawk shot past grabbed a dunnock less that 10 yards from me, talons scraping on a car park tarmac and disappeared behind the bushes with it's victim. That was the last I saw of the cirls though I did see the sparrowhawk fly past again so it may be it was in the vicinity all day. Over the next 5 hrs I returned several times but not a sniff of a cirl.
The rest of the time I was either trying to get some pictures of the yellow-browd or wandering around the bay and along the low cliffs to the south. 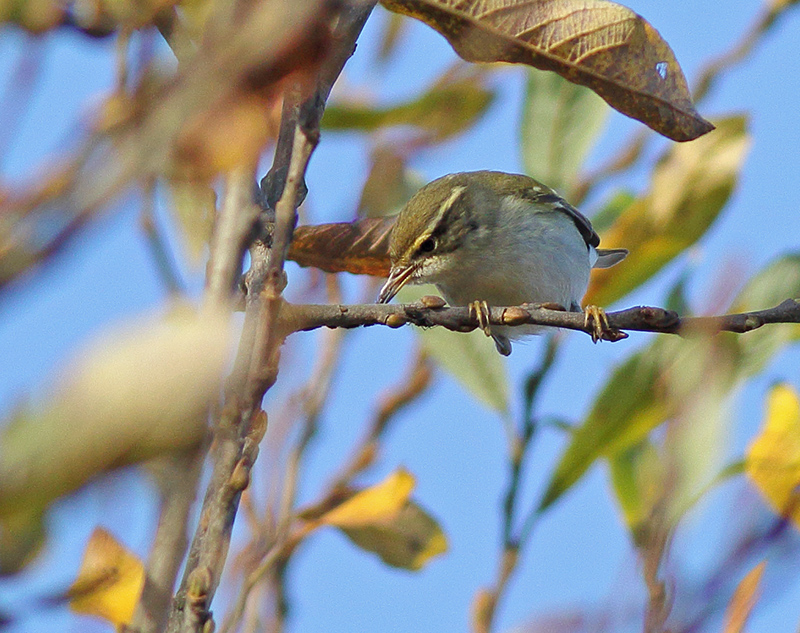 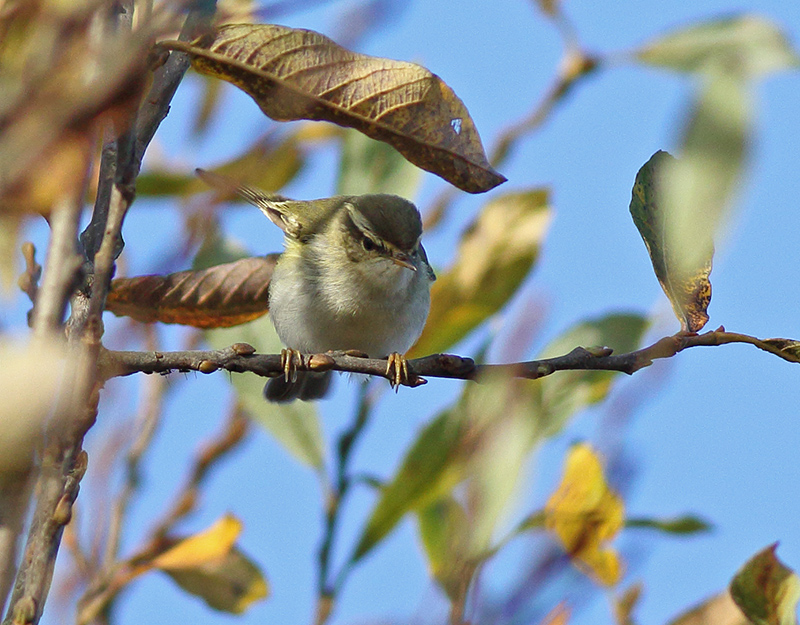 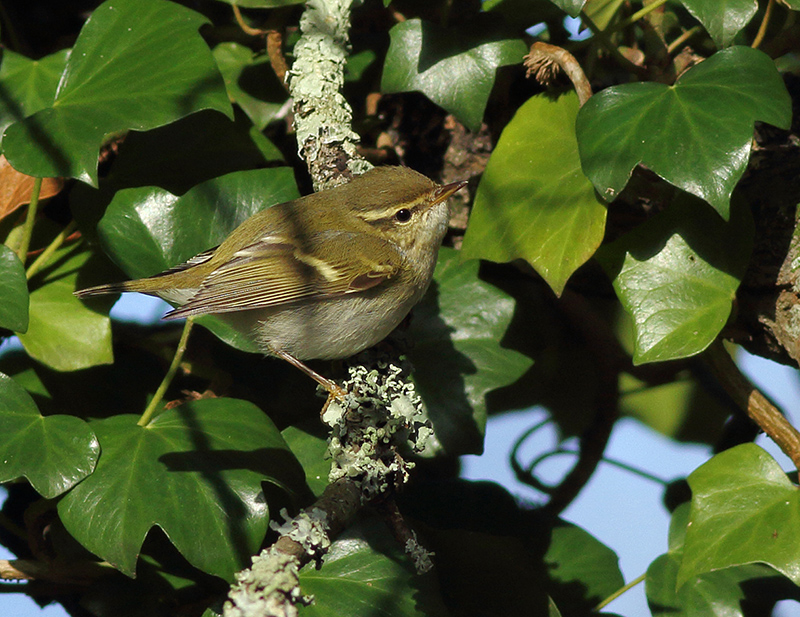 Both endeavors were successful(ish) with some shots of the yellow-browed and distant views of a number of black headed grebes (I was told 8 were around but I only saw 4), a slavonian and the razor bill again. No sign of any divers though.


I did think about having another session Wednesday morning but decided to give it a miss and leave for home early. The failure to get any shots the second day made my mind up.
I most birds I saw around was 7 though one of the locals said he'd had 10 (It's possible I missed some in the bushes). This number seems to be well down on normal but the low numbers were thought to be due to the mild winter to date with birds still finding enough food on the fields. I was also told that in some breeding areas numbers have dropped due to farming subsidies to leave stubble fields over winter having been withdrawn.

I'm still puzzling a bit of separating juvenile cirl buntings from yellowhammers and will try to do a post on the number of plumage variation I photographed.