Could you ever tire of Waxwings?

Waxwings continue to be reported around the county but to date none appear to have taken up residence other than the Dumpton flock so if you want to see them this is the only game in town at the moment.
I went to see them on Saturday (27th) but they only hung around for a few minutes and I wasn't happy with the pictures I managed so I decided to give them another go today. It was also cold so wandering around trying to find something new was not that attractive. 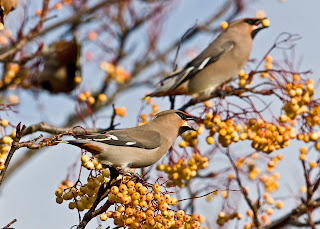 I arrived at Park Avenue at ~10.00 to see Steve Reynaert hanging around and looking very suspicious - I think he's off work more than me and I'm retired!
I was just getting out of the car when ~ 30 waxwings dropped into a rowan on the main road but they retreated high into one of the adjacent trees almost immediately where they sat for the next 10-15 minutes. 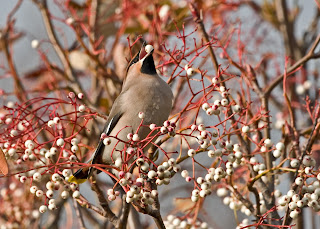 The next time they came down to feed it was to the white berried rowan in Park Avenue, fortunately the sun was out for this feeding particular frenzy and a few reasonable shots were obtained. 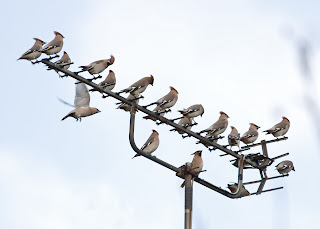 This pattern continued for the next hour or so with the bird sometimes feeding in the yellow berried rowan on the main road and sometimes in the Park Avenue rowan. 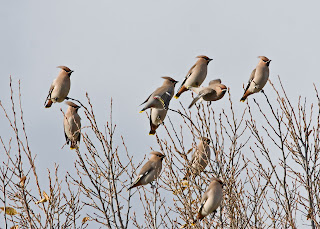 Whilst their behaviour - sitting around on a high perch then dropping down to feed before retreating back to their perch - is normal, this flock is different from those I have experienced previously in that their feeding is really frenetic with them gobbling down 5-10 berries in a few seconds then retreating immediately. They never sit around in the rowans for their pictures to be taken. They also seem more shy of people/cars etc than normal.
Getting a decent picture during this frenetic feeding  was very difficult because unless the sun was out their movements were too rapid for the available shutter speed to freeze the action. 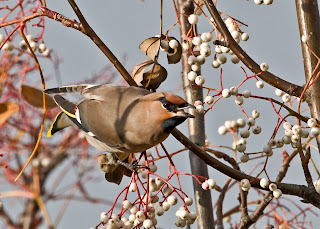 Still during the hour or so I was there the sun was out on several occassions so a few pleasing images were obtained. More pictures can be seen on my Flickr site.

On the way home I stopped off at the old rifle range at Kingsdown and wandered down to the end. Sadly there is still no sign of the black redstarts but the pair of stonechats are still in residence, the rock pippits (3 today) were  flitting about enthusiastically and several fulmars are back on the cliffs.
Posted by Greater Kent Birder at 19:03