Bunting brightens up the day

Today was not very inviting with snow, rain and a north easterly wind.........however I had to go to Sandwich to get some pet food.
On the way back I first stopped at the Obs for a cuppa then at Restharrow scrape where some waders had been reported.  Well when I got there they were gone. The ice was begining to melt but the only birds  on offer were 30 teal, 2 wigeon and 2 swans.
As I drove south along the Ancient highway I stopped at Dixon's corner and looked along the track across the golf course and spotted a snipe sheltering from the snow in the tracks! 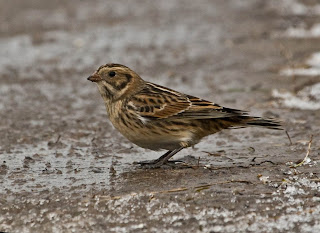 Next stop was the track where Martyn Wilson had the lapland bunting yesterday (and where the laplands were a couple of years ago). No sign of it when I arrived but I stopped anyway, put out some seed and waited. After about 10 minutes the lapland bunting landed ~ 30 yrds away and made it's way to the seed. It was very close but the light was absolutely dreadful and only poor quality images were obtained. 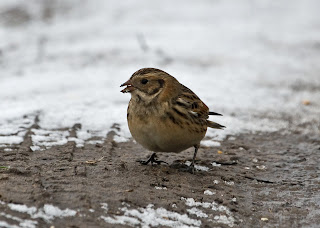 After a few minutes it upped and went and I didn't see it again.

The final stop was by the Chequers barn. I could only see 9 corn buntings today (compared to 16 last week) though the others could have been sheltering behind the muck heap. Also at the barn were 8 grey partridge and a number of chaffinch.
Not a bad haul for a drive along the Ancient Highway in the sleet and snow.
Posted by Greater Kent Birder at 17:45