Kingsdown in the snow 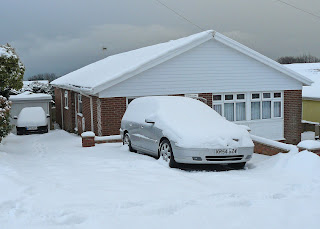 I know that compared to more northern counties we've not had much but 6 inches or so but it is still enough to shut down most of the village. So with the cars stuck on the drive I had a wander around. 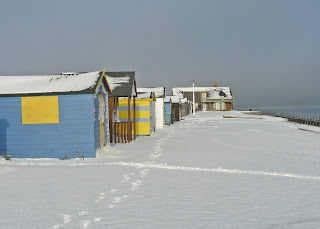 Down on the beach the sea was calm with a mist coming off the surface showing the water temperature to be significantly warmer than the air temperature - the beach huts providing a little bit of colour for a picture. (I took a picture of the mist but it didn't show very well) 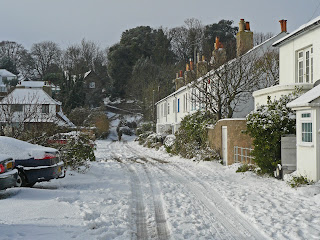 
Along to the rifle range and no sign of the resident stonechats (I hope they haven't perished; not many survived last winter) though I could hear a robin and some rock pipits. I didn't linger though as a rather nasty northerly breeze got up prompting a retreat inland and the shelter of some trees.
I walked up the Oldstairs road and at the bottom of Kingsdown Hill I found a gold crest (though I think there were more present from the calls). As I continued along to Otty Bottom by far the most common bird were blackbirds, they were everywhere, with a good head of robins thrown in.
As I got beyond the riding school I had a nice surprise as I flushed 3 snipe from the hedgerow. They flew along the track and disappeared back into the hedge only for me to flush them again and again. I had hoped for some woodcock but this is the first time I have seen snipe along this track so not a bad substitute. 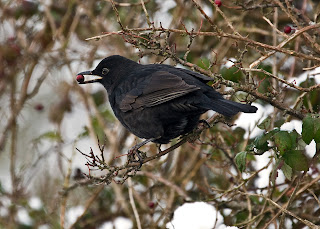 The track actually leads all the way to St Margarets but I only went as far as the open fields and here I lingered for a few minutes to let the birds get used to my presence and allow a few pictures to be taken. As it was blackbird, redwing and robin all posed nicely. Also around were chaffinch, goldfinch, blue and great tit but none of these came within camera range 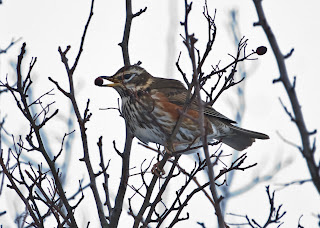 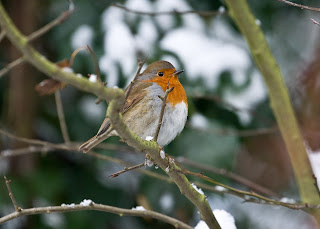 I wasn't expecting anything different on the walk back to the village down  but near the riding school I flushed 2 woodcock and then a 3rd on Kingsdown Hill.  I don't know where these had been on the way out. 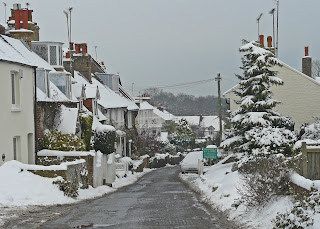 That was about it on the avian front and for the rest of the walk I had to make do with the scenary. Back in the village the main road through the village(Upper Street) was now clear of snow as were the other "main" roads but getting to them will still pose a problem tomorrow - we've got to get to the shops or starve.
Posted by Greater Kent Birder at 18:19