I've not been out much this last week or so hence no reports.
Last week the main problem was hangovers - first from the Kingsdown Retired Gentleman's Christmas lunch then from a ball we attended on Friday evening.
After that there was the snow with passage in and out of Kingsdown being somewhat restricted. 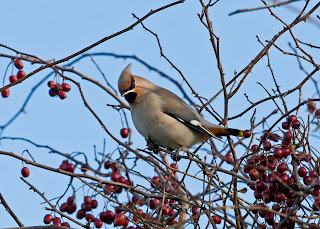 On Friday I did have a walk over Worth marsh but little of note other than 2 (more) waxwings - but I don't care, I still think they are fantastic and have to take some pictures.

Today I had a couple of hours out between physio and dentist (just how lucky can one be?). I walked the track between the obs and the level crossing and as normal the hedges were full of thrushes. Redwings and blackbirds were most prevalent but there were good number of fieldfares plus several song thrush and a lone mistle thrush.
A sparrow hawk buzzed the hedge line 3 times (or 3 sparrow hawks buzzed it once) but I never saw it catch anything. 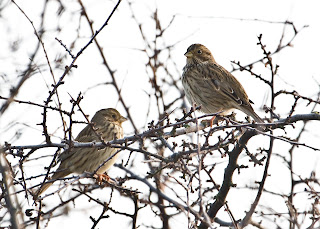 Most interestings sightings were of corn buntings. They were everywhere. Ian, from the Obs, reported seeing 60. I couldn't match that but must have seen 40. Reed bunting numbers were very low; I only saw 2.
Only other birds of note was a lone tree sparrow and 2 yellow hammers. 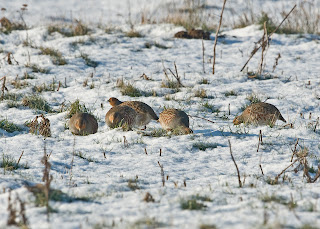 On the way home along the Ancient Highway I found 300+ lapwings south of the Chequers and whilst counting I spotted 5 grey partridge in the snow. I waited for ~ 10 minutes for them to come closer but they were taking too long and I had to go.
Posted by Greater Kent Birder at 19:15