Dawn saw me at the Cinque Ports GC resevoir looking for the red throated diver. It was still there so I got into monkey mode and clambered up the tree for a few more pictures. I had hoped it would swim a bit closer but throughout it remained at the far end for the whole time I was there. 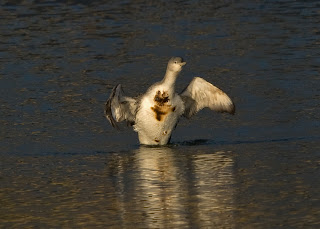 The shot I've attached shows the oil on the breast. I'm pretty sure it has some more on one side but I can't get a picture that shows this.


After the diver I went to Dover but no sign of any waxwings in Coombe Valley Road so Folkestone it would have to be.
There were none in sight as I arrived but other birders told me they had been around so I waited.
After ~ 20 minutes a small flock of ~30 arrived, had a feed then flew off after a few minutes. I took a dozen or so pictures but the light wasn't great. 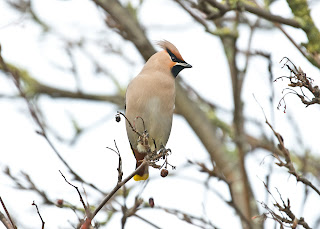 Another wait of ~ 30 minutes then they started returning. Birds came in in groups of about 50 until there were 250-300 present. The light was a lot better now and as they dropped to feed I managed some decent images as they fed.
I stayed around for about another hour but the next time they returned the numbers had reduced and they stayed at the top of the roost tree.
I gave up at this point and went off to do my chores. I'm hoping I can resist the call of waxwings after today
Posted by Greater Kent Birder at 16:06