I had to go back to today so had another go on the Prince of Wales Pier. No sign of the snow bunting today though I could have predicted that because I had the camera out and ready. 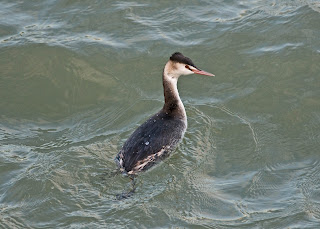 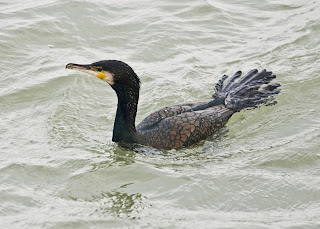 Also fishing right up to the pier was a cormorant but no sign of a diver or shag. 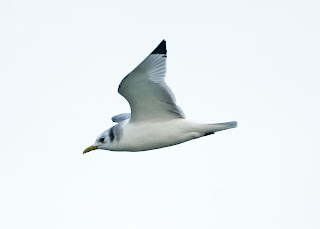 As I approached the end of the pier a kittiwake cruised past - I didn’t realise the adults developed both a black and dark grey smudge on the neck in winter. (it doesn’t help that most of the field guides only show the adult in summer plumage choosing to concentrate on the juvenile).
The pier held more turnstones today (6+) but I think this may be due to more fisherman being on the pier. 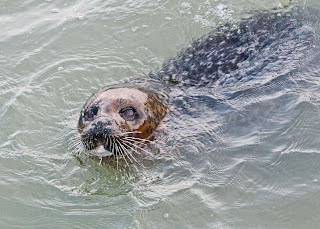 I was just about to call it a day when I noticed a seal right beside the pier, just where a couple of the fisherman were. At first I though it was an amazing stroke of luck and approached very cautiously but I was told by the fisherman that it had been around for several hours. The guys were feeding it any small fish (small  pollack I think) they caught. Talking to them one estimated it had been fed about 5 lbs of fish.

Other than in a zoo this was the closest I had been to a seal.
I watched/photographed the seal for 15-20 minutes and it was still there when I departed.
Getting some decent images was a bit of a challenge because of the light. I had to go to ISO 640-800 to get any shutter speed and even then I was only at 1/200th or so. 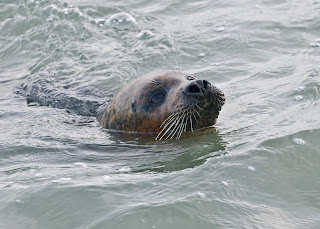 Looking at the pictures I obtained you can see that as the seal surfaces the water takes quite a long time drain off its fur unlike with ducks where they look dry immediately.
A very enjoyable hour!
Posted by Greater Kent Birder at 21:15