The day started at Sandwich where the waxwings (13 today) were still down near St George's Golf Club. Thrush numbers on the estate were pretty high with a lot of redwing, fieldfare and black birds around but we also saw both mistle(2) and song thrush.
After that a shopping trip to Dover ended with me taking a look at the western docks from the Prince of Wales pier.
Out in the main harbour was a raft of 15 great crested grebes plus another 2 or 3 fishing and a cormorant. No sign of any divers or shags though - the hoped for target.
As I walked further along the pier I heard a bird call and looking up saw 3 small pale birds flying towards the shore but lost them before they landed. The call was familiar but I couldn't remember what it was, however I was sure it was one of the winter buntings/larks.
My concern was short lived because a few minutes later there was a snow bunting perched on the pier wall - I've now checked and can confirm the calling birds were snow buntings.
Needless to say the bunting flew off before I could get the camera out. 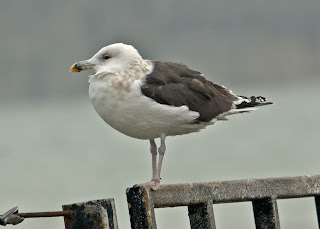 I walked on to the end of the pier but nothing else of note  - only the common gulls (not even a med) and a lone turnstone..
On the return leg (it was now trying to snow) I found another 2 snow buntings, this time on the pier road, but again they flew before I could get close.
As I made my way back I was wondering what snow buntings were doing on the pier but then I found out  - at then landward end of the pier you can look out onto the old hovver pad - there were the 3 buntings feeding amongst the weeds growing there.
I could try to claim there were 6 but I suspect the 3 I saw flying were the same as those I saw a little later on the pier/hovver pad.
Posted by Greater Kent Birder at 15:44