Well in trying to sort out the formatting of this blog I have managed to delete it so here we go again.
I arrived at Stodmarsh somewhat later than anticipated due to the cricket so missed the main harrier exodus (for a full report see Martyn Wilson's blog; Martyn and Mark had been there for about half an hour when I arrived). There were still some harriers around though with 7 in the air east of the Lampern wall at one time. Whilst on the wall a bittern was seen (distantly) landing next to the reed bed and proceeded to slowly walk alongside the reeds for ~10 minutes. The highlight of my session on the wall was a superbly marked barn owl that drifted along the wall and disappeared in the direction of the river. The light would have been ok for a picture but needless to say none of us was ready
After the harrier activity had stopped we retired to the reed bed hide for breakfast. Whilst there we saw a further 2 bitterns flying, again very distant, with both landing in the reeds in the general direction of the lake hide. Also whilst sitting in the hide a superb male sparrow hawk cruised across the reed tops and landed on one of the posts set in the lake in front of the hide. Now you woud have thought that the episode with the barn owl would have taught us a lesson and the cameras would have been ready for action. No way. There was a mad scamble to get the cameras out but after 10 seconds the bird was gone and so was the photo-opportunity.
We had a quick look in Alder wood but only found ~30 sisking so it was off to Fordwich/Westbere.
Overall Fordwich was a disappointment with little of note seen other than more siskins and 3 goldcrests. 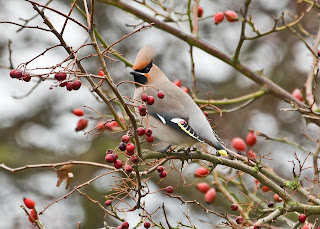 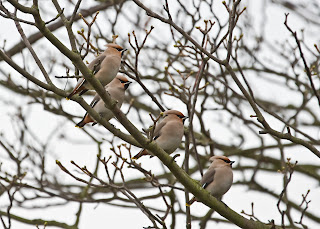 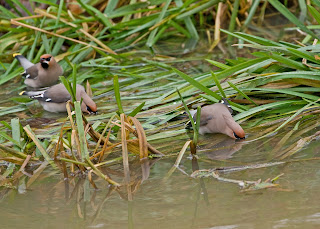 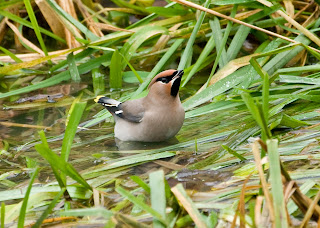 Cutting our losses Martyn and my self decided to return to Sandwich and drop in at the Obs for a coffee and to see what had been found locally but we only got as far as the car park.
As we arrived we were told of a flock of waxwings on the Green Wall (at the St George's end), adjacent to the white iron bride, so it was back in the car for the short drive.
We immediately found them (14) sitting in the hawthorns on the opposite bank and this is where the birds stayed for the next hour allowing everyone who came along to have great views.
The real interest of the session was every 10-15 minutes the birds dropped down to the river bank to drink. They would land on some fallen reeds and often be chest deep in the water. It was the depth of water they stood in and the frequency of the drinking that were a surprise. I'm left wondering whether the periodic disappearance of waxwings from other feeding sites is them going off to have a drink.
The light was poor but some reasonable general shots were obtained perched in the branches and well as some interesting ones of them wading.
Posted by Greater Kent Birder at 06:57