Today I went to the point. 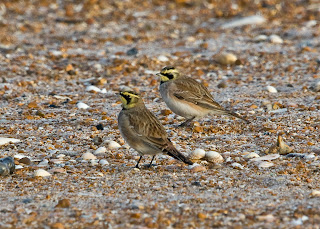 The only birds of note during the first part of the walk was a flock of 11 blue tits tumbling along in and out of the buckthorn. About level with  Princes new club house I found the two shore larks – the main reason for walking the beach. As per normal they just wouldn’t let me get close enough for a decent shot but it was good to see them again.
As I was trying to get a picture of the shorelarks 2 buntings flew past but they just kept going north until lost from sight.
I finally lost track of the shore larks up by the 100 Acre Field so I took this opportunity to have a good look in the wetter areas of the field for a jack snipe.
Despite my best efforts I couldn’t find one though I did see 23 snipe and get wet feet.
Of note in a negative sense was the total lack of any raptors around the point.
I made my way back to the beach where I found Gerald Segelbacher walking north - he too was looking for the shore larks. Gerald had seen 2 warblers just north of Princes club house.
We did walk up to the point but only saw the normal waders and ducks.
During the return leg we managed to relocate the shore larks and get a few more images. I also flushed a woodcock from the dunes and we saw one of the Dartfords by Princes but only as it flitted from one bush to another.
Also on the return leg I saw 4 corn buntings – numbers of these seem well down on previous years as are stonechats numbers  - again I saw none the whole morning. A sad consequence of last years bad winter.
As I got back to the car I received a text saying there was a black throated diver  on the Cinque Ports Golf Club reservoir (by the Chequers). 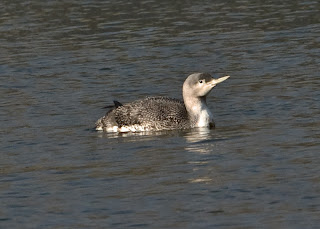 The good news was it didn’t take long to get there and I quickly got a few images  – the bad news was it was a red throated diver!!!!
Back at the cars we were scanning Worth Marsh for the previously reported white fronted geese (which weren't there) when a flock of waxwings dropped into a distant hawthorn bush. At first there only appeared to be 20 or so but by 10 minutes later the flock was 50+ strong.
A nice end to a decent mornings birding.
Posted by Greater Kent Birder at 19:58