Today was mainly spent around the Sandwich estate - my patch list looking pretty pathetic at the moment.
A sea watch for the first hour or so produced a few year ticks but nothing exciting. There were a few red throated divers, some 15 great crested grebes a fulmer and a lone auk that was too far out to identify.
﻿After that a wander around the estate added sparrow hawk to the year list - a suberb male came within a few feet of the hide then it was seen again over middle field. Also at  Restharrow there were the common ducks with me passing the time trying to get some flight shots. This wigeon was the pick of the bunch.
On the gull front a colour ringed 2nd winter Mediterranean gull dropped in. From the picture you can see the ring is green (so probably a French or bird) but the pictures not good enough to read the number/letters.

Back at the Obs I was told of a flock of waxwings showing well at Foulmead so after the obligatory cup of coffee I was off.
When I arrived Tony Flashman and Graeme Crick were already there taking pictures of the birds from ~ 10 feet so I joined in the fun.
The birds moved about a bit but they were very often low in the bushes – down to ~ 2feet off the ground and whilst they did retreat to higher perches they did seem happy to remain low when not feeding. On the feeding front they were eating anything they could find including rose hips though these took a bit of getting down.
The sun was shining, it was behind us allowing camera settings of typically 1/1000 @ f8 so it was difficult to miss out.
Despite the excellent conditions try as I might I couldn’t manage to get any decent flight shots – the camera/lens just focuses too slow. 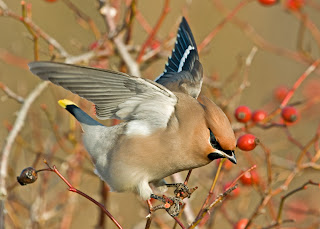 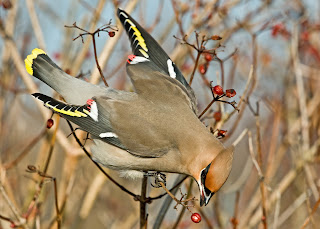 So what started off as a quiet day collecting a few ticks ended up with superb vuews and images of waxwings. I'm happy
Posted by Greater Kent Birder at 08:16