Today was the first I’d been out for a few days due to  the poor weather - since I can go out nearly everyday there seems little point in going out when the weather is foul.
The day started very well with me spotting the male hen harrier over towards Mary Bax from the obs and whilst drinking a cup coffee! This mornings walk along the Green Wall then down to Newdowns however was hard work with little of note being seen – mainly blue and great tits - with no finches anywhere though a couple of Cetti's were heard alonmg the river bank.
Newsdowns reservoir had a lot of coots and tufties and the great crested grebe is still in residnece but Princes reservoir provided the most interest with a drake goldeneye, 3 little grebes and good numbers of tufties and pochard.
After that and because the sun started shining I went to Thanet hoping for some waders pictures. I arrived at Foreness somewhat later than I’d hoped and the rocks were just disappearing on the incoming tide. On the shore line there were plenty of turnstones and a lone grey plover and just a few feet out in the water a flock of 20-odd brents. They were very white on their sides but I can’t decide whether these were the pale bellied brents not. 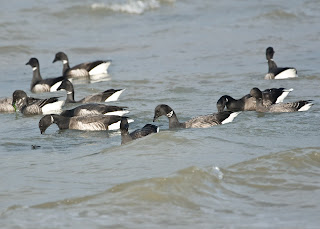 I then got tempted by the fulmars which were hanging tantalisingly in the wind.
After 10 minutes on these I noticed a red throated diver inside the rocks but it dived and reappeared significantly further out to sea and I missed the photo opportunity.
I went looking for waders but only found ~ 30 sandling (and more turnstones) - no purps or ringed plover-  but by this time the sun had gone in and picture quality deteriorated.
As the tide pushed futher up they sandling flew off leaving me with the turnstones. I gave up at this point.
Posted by Greater Kent Birder at 23:58