A Superb Day at Dungeness

Today I went to Dungeness. I went via Welland Marsh in the hope of finding the Bewicks that have been around several weeks but I failed to find them. However on leaving Lydd I went along Ness Road which got me thinking about where the name Dungeness came from.
A Ness is a promontory so its easy to see where the “ness” of  Dungeness comes from as the shingle/marsh sticks out into the . But where does the Dunge come from – there’s Denge Marsh out there and Denge wood further north; has Denge been changed into Dunge? If anyone has any thoughts can they let me know.
I was also wondering whether comes from the French word nez (pronounced nay as in Cap Gris Nez). If you pronounced nez in English it’s pretty similar to ness though Wikipedia suggests ness comes from German.
Anyway enough of this.
My birding staretd at the ARC but my first sighting was of Steve Raynaert who was sitting in the Hanson hide - he's off work almost as much as me! We were told there was a bittern in the reed bed by the hide but we never saw it.  We saw some very distant smew (one of my targets for the day) plus some goldeneye and all the common ducks but there was nothing else of interest so we soon departed to the Point to look for the glaucous gull.
We parked near the lighthouse, walked out to the boats and started trudging along the shingle towards the point. After a few hundred yards I went back towards the boats but Steve continued towards the point.
Occasional scans of the sea showed dozens of cormorants (more than I’d seen together previously) lots of great crested grebes, a few red throated divers and a few guillemots close in though to be honest nearly all of the time was spent looking at gulls.
I was between the two groups of boats when I saw the glaucous coming towards me. It was too late for pictures so I tried to phone Steve to tell him it was coming his way but all I got was his answer phone!!!
It flew past Steve with me in distant pursuit. Steve had failed to see it but chasing it down the beach seemed a waste of time so we returned to the boats and a little later so did the glaucous. On a couple of occasions it landed and we tried to get close without enormous success though we managed to get close enough for some images on a couple of occasions.
I even tried putting out bread to attract the gulls in but they wouldn’t come whilst we were close by – though as soon as we moved away they came to it. On several occasions it flew past but the images were generally poor. 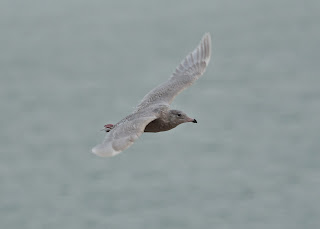 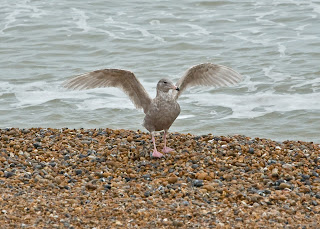 Eventually we’d had enough so we went to the RSPB but stopping at the end of the ARC pit where 16 smew could be seen - 2 drakes and 14 red heads plus 4 or 5 goldeneye ( 2 drakes).
At the visitor Centre we were told of a goosander from the car park hide (east side of the car park) so we started there. At first we couldn’t find the goosander but some female smew came very close, one catching a decent size perch just out from the hide. The bird wrestled with it for a couple of minutes but eventually gave up and let it go.
Also from this hide we had 2 bitterns in flight and eventually a distant goosander.
Next stop was the Makepeace hide where we soon  found the black necked grebe (very distant) but then 2 goosanders started swimming towards us with one coming slowly across the front of the hide. We should have managed excellent shots but we were looking straight into the sun (well that’s my excuse). 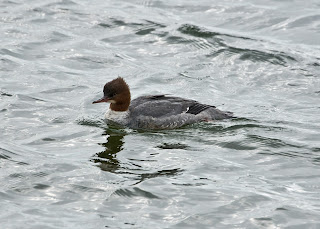 Final stop was the Scott hide but the only new bird from there was a pintail.
I departed after this but Steve continued round the circuit.
It seems I was the only person at Dungeness who had not seen the Bewicks. As I said earlier I had gone across looking for the swans and failed but everyone else had used the main road and seen them in an adjacent field. For the return trip I used the main road  (the B 2075) and sure enough there they were (~ 75 of them) – I stopped and took some pictures but they were 200-300 yrds into the field. Better than nothing though. 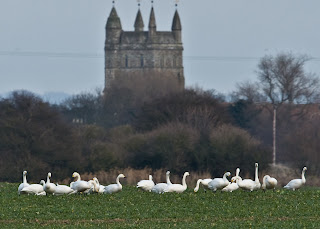 The final target for the day were the northern long tailed tits that had been seen at Dymchurch. I parked near the church and found another birder (I don’t know his name but he’s often at Dungeness sea watching) who had seen them already. He/we soon relocated them but they were too high and distant for a picture then they disappeared back towards the church. The next 90 minutes was spent trying to relocate them. I had just found a flock of LTTs when Steve turned up but these were just the normal ones. Steve and myself finally relocated the northern LTTs near the small school. At times they were very close but what with the light, twigs etc I never managed the shot these gorgeous little birds deserved. 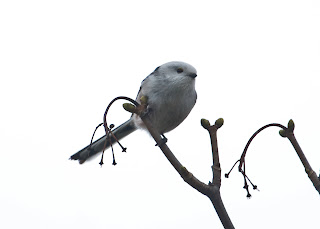 Getting an image was not made easier by a male sparrow hawk that cruised slowly overhead scattering everything.
The LTTs didn’t go too far but by this time it was really getting dark and I gave up.
So a great day with a couple of really good birds and some great views of smew and goosander. Shame about the light!
Posted by Greater Kent Birder at 23:27