I didn’t go out over the w/e due to the rain and it being Angie’s (my wife) birthday – though from the reports from around the county I didn’t miss much.
Today I reported for duty at the Obs and wandered around the estate with Ian. Slow would be an understatement. The great tits were in good voice and the chaffinch and greenfinch are also singing but little else was seen in Middle field and the Elms. The sea held 2 large rafts of great crested grebes (~ 150 in total) but there was nothing else moving on the sea and the highlight from Mary Bax was 3 pairs of grey partridge. Restharrow held the normal ducks and geese though the barnacle goose seems to have moved on. So it was back to the obs for the real reason for being there - coffee.
I had to take Angie to station this afternoon so since I was in Dover I had a look around the yacht basin and the harbour.
I started at the yacht basin but no sign of the scaup or the shag so I wandered out on the pier. That was looking equally devoid of anything interesting (no grebes or divers) when I spotted a guillemot up towards the end of the pier.
When I drew level with it was 30 or so yrds from the pier but after a while it started to come close …….then very close. By this time I was right on the very end of the pier and at times it was so close that I couldn’t see it over the parapet. 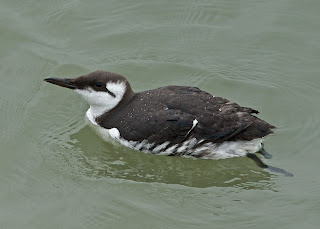 Whilst alongside the pier it dived a couple of times but the pictures I took were too blurred due to the slow shutter speed.
It did however manage to catch it behaving like a diver with its head/beak under water: 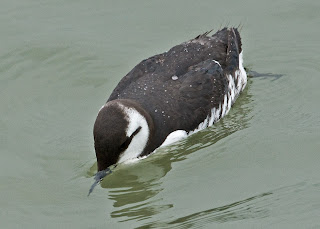 Eventually it moved away and I started back to the car.
Turnstones are still there ( do they disappear in the spring?) and there were several kittiwakes (adults and 1st winters) cruising back and forth.
As I went to retrieve the car I spotted the scaup in among the boats asleep (must be retired because  that’s what I do most afternoons) but then it woke up. It never came close but that may be because there seems to have been a spill of diesel – there was a film of oil on the water by De Bradelei warf and it stank.
Some of you may have heard that a red breasted goose was seen at Restharrow – well it’s true and I’ve seen the pictures. However no one at the obs got to see it. In fact they didn’t even hear about it until the next day. It seems the finders are pretty new to birding so didn’t actually know what it was they were looking at until they looked it up at home.
Posted by Greater Kent Birder at 18:21