14th February
The weather forecast was good so I decided that another session at Park Wood was in order.  The day didn’t start well because on the way I got caught I a traffic jam due to an accident – though I suppose it was worse for those involved - but eventually I arrived even if the route was longer than planned.
As I got out of the car I could hear a lot of bird song with 2 song thrush really giving it some. Some 30 yrds into the wood  I had stopped to look at a mixed flock of tits (blue, great and long tailed) when a small bird was seen low down. My first thought was wren but it was a goldcrest so out with the camera and a few pictures in the bag.
A little further in and another goldcrest was feeding and calling enthusiastically but he wouldn’t show himself very well. Blue and great tits seemed to be everywhere but no sight (or sound) of a marsh tit and that was the pattern for most of the circuit. Also absent were any woodpeckers though the occasional common buzzard could be heard in the distance
When I was ¾ of the way round and dropping back down into a clearing I finally found a pair of marsh tits but after a few seconds they disappeared and were not seen again.
Standing around in the clearing was rewarded however in the shape of a common buzzard. First one then a second flew east, the second one just above the tree tops.
I waited for ~15 minutes and although buzzards were seen on several occasions they were gradually gaining in height as the circled. As one point I had 4 circling together in very close proximity and even managed a shot of 3 of them together (this has not been composed in Photoshop! If I’d done that I would have used better images.) This little group seemed to show the full breadth of buzzard colouration (though sorry about the picture quality).
I wandered around for another hour or so but I had little else to show for my efforts – I did hear a nuthatch calling but couldn’t get close enough to see it and managed a glimpse of a great spotted woodpecker but that was it.

This is the 3rd time I’ve dipped here on lesser spot –  as I said in a previous blog I haven’t seen a lesser spotted woodpecker here since they were chased away from the hole they were excavating by a pair of great spots.
After that and so as not to completely waste the sun I went to Folkestone and played with the med gulls for a while.
It’s quite interesting really. Throw out some bread and the first on the seen are a few herring gulls. The meds however soon catch on and take up pole position. At this point the herring gulls seem to back off a little leaving the med gulls to get most of the bread – I thought herring gulls were made of sterner stuff than that. 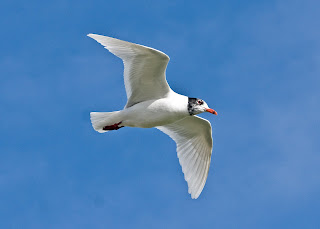 I took loads of pictures but most were a disappointment. The birds were normally photographed at ~ 20 feet and were complete frame fillers-but at that distance (even at f8) the depth of field is such that if the head is sharp the wings are not (That's my excuse anyway). Still I suppose my failure to get the images I wanted means I have an excuse to go there again.
Posted by Greater Kent Birder at 18:10