Given it was a bright but no breezy day I decided another trip to Park Wood was in order.
I arrived at ~8.00am and the woods were full of song – song thrushes in particular.
Immediately on going through the gate I heard what I thought was a marsh tit and after a minute or two I’d found it - a decent start to the day. A few more yards in and I heard then found a nuthatch – even better. I watched the nuthatch for a few minutes taking a few (poor) pictures when it was joined by a second before they both disappeared towards the road.
Whilst I was standing around there was a lot of high pitched twittering going on and during this period I saw coal tit, blue tit, great tit, long tailed tit and a tree creeper – with a second tree creeper seen later.
I returned to the main path and continued into the wood and pretty soon I was onto another nuthatch – this one was a little lower in the trees and I managed a few record shots: 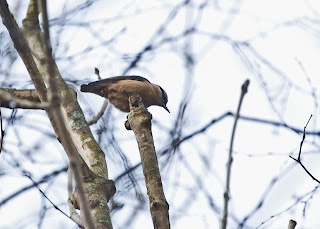 The top half of the wood was pretty quiet with a few blue and great tits seen but little else. A great spotted woodpecker drummed a couple of times and a green woodpecker called but I never saw either.
As I dropped down from the top of the wood into the clearing I heard more marsh tits then found another nuthatch. I’m not sure how many nuthatch there are in this wood – I saw ~ 6 but I find it difficult to believe they were all different birds though I think there were more than 2.
During the walk around a sparrow hawk went overhead twice (or it could have been 2 birds) and as I departed 2 buzzards could be seen circling east of the wood.
This is the 3rd time I’ve been to Park Wood and no still sign of a lesser spotted woodpecker; otherwise it is a very productive little wood even if getting a decent photographs there is difficult.
After Park Wood I went to Pegwell hoping to meet Phil Milton and get (another) lesson in recognising Caspian and yellow legged gulls. As it happens Phil didn’t show up but eventually Malcolm McVail and a little later Chris Hindle (and Ann?) showed up and we scanned the gulls.
I seem to have spent quite a lot of time looking at gulls recently but I don’t seem to be getting any better at finding one. Eventually Chris turned up what he/we thought was a 3rd winter yellow legged gull – incomplete grey mantle the grey being clearly darker than the herring gulls nearby, washed out yellow legs  (not as yellow as the lesser black backed gulls), significantly larger than the lesser black backs nearby, an all white head, and a heavy beak with a black smudge near the tip.
The eye looked small and dark like a Caspian but that may be due to the distance/light.
There were a lot of waders on the shore line (knot, barwit, dunlin, grey plover) that I didn’t attempt to count. A bit closer were ~250 golden plover, ~370 lapwing, and  ~ 170 curlew.
Slightly more interesting were 2 avocet and a little egret.
Posted by Greater Kent Birder at 00:29