My wife, Angie, was given a tank driving experience for a birthday present as a consequence we were down in Winchester this w/e.
I had looked for somewhere to do an hour or twos birding Friday afternoon but there was nothing local that tickled my fancy however I did find the Hawk Conservancy Trust at Andover. Now I know it’s not the same as seeing them in the raw but honestly, am I really going to see a Stella’s Sea eagle in the wild ? - I can’t see me having a birding holiday on the north east coast of Asia.
Due to traffic jams on the M25 we actually arrived a lot later than I had hoped but we saw some of the displays and most of the birds in the cages/aviaries.  To be totally honest so many of the birds were unknown to me and I am still struggling to identify some of the pictures I took – I should have photographed the signs as well as the birds. I tried to photograph everthing I saw but many of the pictures are utter rubbish due to light being very poor shutter speed very slow coupled with a decent sprinkling of incompetence.
When we arrived the “Valley of the Eagles” display was on which didn’t feature too many eagles but did allow you to see black kite, yellow billed kite (juvenile – and a species very similar to the black kite) and hooded vulture.

They also flew in 2 African fish eagles that they release a couple of miles away but they have to get permission from the local flight controllers – the day we were there the flights were delayed by a few minutes due to an air ambulance flight.
Another display is of woodland birds – this takes place in a thickly wooded area which on an overcast day makes photography totally impossible. Here they flew eagle owl, barn, little owl, brahminy kite (a stunning looking bird) with the latter plucking food from a pond.
The rest of the day was spent wandering around trying to get some pictures. With the birds that are in cages you can (just about) get a reasonable image if the bird is at the back of the cage and you can get the camera lens very close to the wire.
One none raptor they have in the collection is the great bustard. They had 4 birds which are “donated” by the Great Bustard  due to the birds being injured in some way. All the birds originate from Russia.
Here are a few of the better images I managed as I wandered around and if anyone can id the grey raptor I would be grateful!

Saturday morning we were off to the tank place. One thing was very quickly apparent – it’s easier to get pictures of tanks/drivers of tanks than it is birds. Here's an image of Angie doing her best to immitate Tank Girl 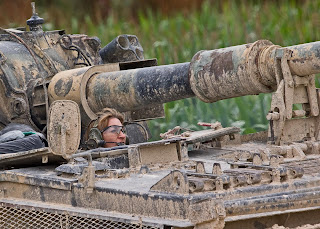 Posted by Greater Kent Birder at 10:57