I wasn’t going to write anything today because the highlight was in the quality of the photos taken of a little stint but I’ve changed my mind and decided to share my day with you.
The weather in the morning was truly foul – wet and very windy. I managed a visit to Restharrow and saw the resident ruff, 2 little stints and 3 dunlin but they were always distant so I quickly withdrew to the obs for a coffee or two.
After that I did a brief sea watch from the car at Kingsdown but gave up after ~ 20 minutes as all I had seen was a dozen or so Sandwich and common terns.
Around midday the weather started to clear so I shot off to Backsand for the high tide. This was a  lot of effort  for little reward as all I found were 3 dunlin, 3 greenshank, 3 common sand, 2 little egrets, 5 little grebe and a few common ducks. I didn't even get the camera out of it's bag.
I departed at about 1.40 but decided to look for wheatears/whinchats south of the sailing club. As I wandered along the Ancient Highway the folly of this exercise became apparent as the wind whistled through. Between Dickson’s Corner and the sea (down by the golf course) I did see 4 wheatears and 3 whinchats but they disappeared too soon to get a shot – assuming I could have held the camera steady.
On the sea wall the wind was so strong it was difficult to stand so I dropped down onto the beach to get out of the wind a little and hoping to find some wheatears doing the same. Well I found one almost immediately but it soon disappeared but then I spotted some waders – 3 dunlin and a little stint – intent on getting some shut eye.
I immediately fired off a few shots to check the exposure then started to crawl towards them. Eventually I was only 15 to 20 feet away and there I stayed for ~ 20 minutes snapping away happily. Most of the time the birds had their heads under their wings but now and again one would look up. 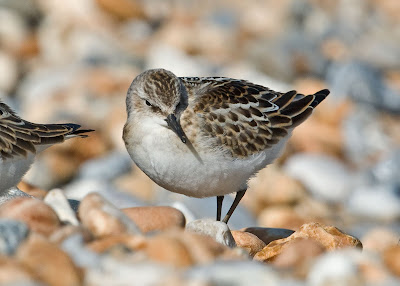 Eventually I decdied enough was enough so I retreated leaving them where I had found them and continued along the beach. Up by the sailing club I found a Chiddy – his vivid blue T-shirt matching the colour of the now clear sky. Mark pointed out 7 wheatears sheltering in Sandilands garden and we had a chat and as always solved most of the worlds problems.
Mark went off to look for the stint and I returned to the car and back to Photoshop.
In all I was out from 8.00 am to 4.00pm and had 20 minutes of prime time – which for this year is a very good return.
Posted by Greater Kent Birder at 23:14