I couldn’t get out till late this morning so after an disappointing few days birding and with the camera I finally gave in and went to see the bitterns at Stodmarsh. At least there would be something to photograph. When I arrived there were already 4 cameras in the hide and 2 of the birds were showing intermittently (this was at 9.30am approx). 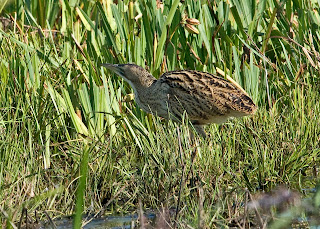 As it turned out this was as close as any of the bitterns got during the course of the session (other than fly-bys) and even this wasn’t close enough for a good shot. The birds slowly and in some case quickly moved away until 3 were together about 100 yrds away then there was a flurry of flying with, eventually, all the birds landing (well crash landing more like) in the reeds to the left of the hide and on the far bank of the dyke. 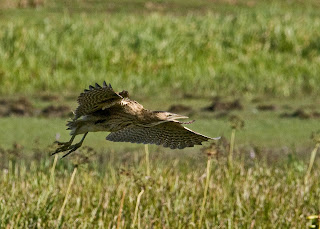 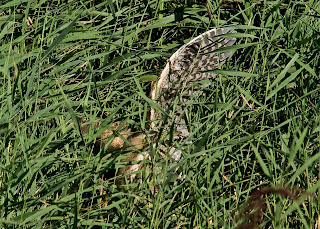 I watched the reed for several minutes hoping one would come out close to the hide but the next I saw of them was back out on the marsh as they made their way quickly on foot back to where they had started. The three youngsters then started moving left with a bit of purpose which quickly got more urgent  and ended with the three of them chasing what I assume to be mum around the marsh. Mum finally stopped running and there was a flurry of activity took place as they pestered her for food. 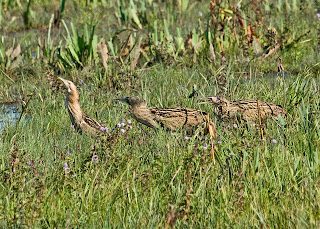 Eventually one of them got stuck in – quite literally as can just about be seen in this picture – the bird back right has its head jammed down the throat of the bird back left: 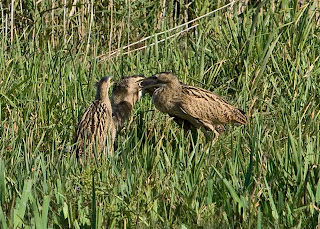 Calm was finally restored and they all stood around for a few minutes then mum flew off towards the Feast hide and the others dispersed either on foot or in the air. 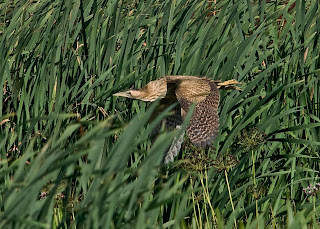 It then went very quiet for a couple of hours with very few sightings though one flew very close to the hide and I failed to get the shot. This was very disappointing as you don’t often get an opportunity like this. Still Phil Milton will be proud of my incompetence as he claims I (and many others) have completely lost the plot with this desire to get sharp images. If you want to see how it should be done look at Mike Gould’s Flickr site. 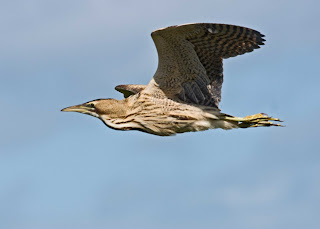 During this period a heron showed an interest in 2 of the young bitterns but they disappeared back into a reed bed and the heron gave up and resumed fishing. Also around were a little egret, a male marsh harrier, a juvenile ruff, a couple of green sandpipers and a few snipe.
I’d been watching diligently for the return of the mother for about 2 hours when over to the far left a melee started with wings going everywhere. The views were poor as the reed/grass was pretty deep but eventually one of the bitterns emerged with a small bream. The female had returned unseen I assume along the river and coming in from the extreme left.
﻿﻿﻿﻿﻿ ﻿﻿﻿﻿﻿ 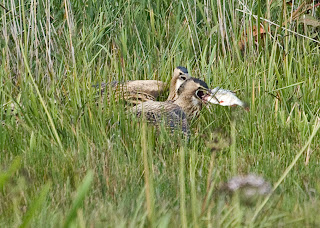 After a few minutes one of the birds flew into the right hand dyke (I assume the mother) and the other 3 skulked off into the reeds which is when I gave up.
A long session – I was there about 5 hours - but spectacle was brilliant with all 4 birds being seen together on 2 occasions as they chased around and were fed. It was just sad my performance with the camera was not equal to the spectacle.
Posted by Greater Kent Birder at 07:11