A Good Day For Waders

The early morning walk around the estate today revealed very little,  just a few common warblers and 3 wheatears. Restharrow was a little more productive with a snipe, 4 or 5 dunlin (I didn’t note the number), 2 ringed plover, 1 little ringed plover, a green sandpiper and 4 little stint.
﻿ ﻿
In general the waders occupied the rear of the pool and were often completely out of sight for prolonged periods but eventually 2 of the stints started making their way down the main island though they turned back once they reached halfway. Still I managed some record shots.
After that it was the regulation cup of coffee where I saw the ringers loading up the Land Rover – they were getting ready to ring at Backsand overnight so my plan for the rest of the day was still intact.
I made my way to Backsand arriving at 11.30 for the high tide at 1.00pm. A quick scan showed decent number of green and redshank plus a flock of small waders – 6 dunlin  and 2 curlew sandpiper. This was great because I have been walking down there several times a week in the hope of something interesting.  I then settled down waiting and hoping that they would come near. Whilst waiting the camera got it’s normal exercise as greenshank, redshank and common sandpiper all walked past the hide. Even this was notable in that to date this year the redshank have stubbornly stayed on the far side of the scrape.

Eventually one of the curlew sands walked across the far side of the sand bank in front of the hide but it didn’t complete the circuit of the island – it flew off to the far side of the pool. About an hour later the curlew sands started making their way closer and eventually both walked right across the front – though I could have done with them stopping rather than hurrying past as they fed. In addition they had their heads under the water most of the time. 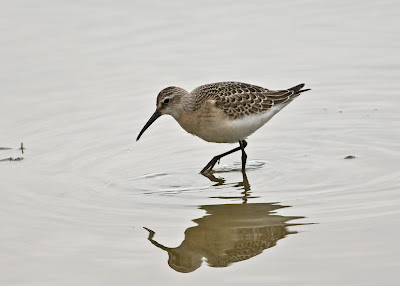 The light could also have been better in that there was complete cloud cover but there was still a lot of glare from the water surface. I could get decent shutter speed but I had to have the lens wide open (hence poor depth of field). Still I’m pretty pleased with the results and think these are the best curlew sand pictures I have managed.
I actually left at 1.00 after the curlies had flown over to the far side of the pool – I didn’t have the time to wait for them to come back again.
Final counts of the other waders/ducks were greenshank 17, redshank 22, green sand 7, common sand 5, wigeon 6, teal 1, tufted duck 2, little egret 1.
As I said earlier the SBBO ringers intend ringing at Backsand tonight so the curlew sands could be gone tomorrow.
Posted by Greater Kent Birder at 19:52