Didn’t have much time this morning so I was up early (for me) and at Restharrow by 6.10 and was delighted to see 2 spotted redshank on the far side of the  island nearest the hide. The joy was short lived however as they flew off about 5 seconds later – I’ve always had this effect on birds. A few other waders were around – ringed plover, greenshank and green sandpiper but no real change on the last few days.
After that I was off to Backsand. Yesterday Phil had little stint and curlew sandpiper at Pegwell and high tide being about 8.00 o’clock it seemed there might be something different about.
The walk to Backsand produced 170 lapwing, 7 grey partridge, a bird that has been more scarce this year than normal and on the stubble there were 61 greylag, 26 Canada geese and 3 curlew – quite a change from normal. Normally there is nothing! Perhaps it was the early start.
On the scrape there were the normal green (12) and common(5) sandpipers, greenshank(19), redshank (8) and a ruff.  Not a little stint or curlew sand  but a year tick just the same.
After a while it came quite close but not close enough for the shot I wanted. 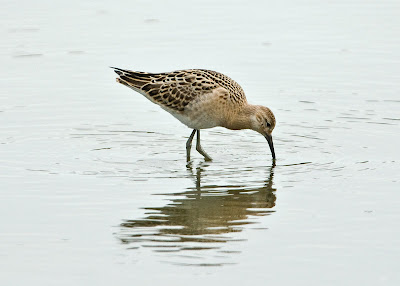 I left at 8.30 but stopped off at Restharrow on the way – a good call as it turned out because out on one of the distant islands was a small flock of dunlin(7) with a little stint keeping them company.
So 2 year ticks and home by 10.00.
Posted by Greater Kent Birder at 19:30