Normal routine today – Restharrow, the Estate then Backsand but today yielded a little more in the way of variety.
Restharrow first thing had wood sandpiper (2 eventually), little ringed plover (up to 6) greenshank, and little egret though a ruff had been seen earlier by Martyn.
The Estate had a decent number of willow warblers, a few lesser whitethroat, a couple of chiffchaffs with a decent number fo birds being seen in the Elms for a change but the highlight were 3 crossbills that flew overhead chirping loudly. For a while they actually seemed to hang there as if thinking about where to go then they moved off west.
After coffee I was on my way to Backsand when I got a call from Phil Smith saying he’d got a small wader there he couldn’t identify and could I tell the Obs. That I did then I continued on my way meeting Phil in the “photographic” hide.
Interestingly Phil Milton had contacted Ian with the news that he had seen a Temminck’s flying up river from Pegwell and to watch out for it.
The bird had been on the island immediately in front of the hide but by the time I arrived it had moved to the far side of the scrape. Phil had some decent images though and what with those and the views with the scope you could see it ticked all the boxes for Temminck’s and 15 minutes later Ian arrived and confirmed the id.
Eventually Ian and Phil disappeared but I’d decided to wait and hope it came nearer.

As I sat waiting common, green and wood sandpiper all came across the front of the hide and greenshank also came close. My counts were 3 wood, 8 green  and 3 common sandpipers plus 3 greenshank and 1 LRP but to be honest I was mainly watching the Temminck’s.
For a long time the bird was distant and the best I could get was pictures of it in the presence of a wood sand and a little later a green sand – the difference in size showing really well.
But slowly it started to make it’s way closer and eventually it landed on the island in front of the hide and came pretty close as it fed.
After a while it gave up feeding and went to the left of the island (by the posts favoured by the wood sand) and started preening. 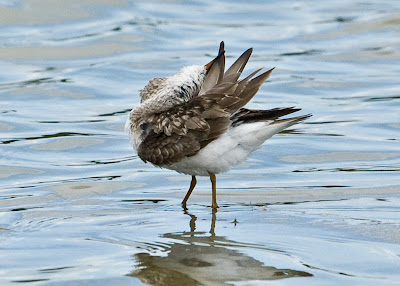 Soon after that a squall came along and the rain tipped it down. This had the effect of scattering all the birds and when it rain cleared the Temminck’s was way over to the right and there it stayed until I departed. This was a little unfortunate because Tony Morris arrived after the rain and never got a close view.
Needless to say these were the best views I have had of a Temminck's.

Finally, in my last post I mentioned Steve's in-growing toenail. Now this has prompted 2 comments (more than any of my other posts) which seems to indicate there is more interest out there for gossip on malformed or injured feet/toes than there is for my bird sightings. If anyone out there has a tale they would like to share then please feel free to post a comment though I may have to rename the blog if the interest gets too high.
Posted by Greater Kent Birder at 00:03