Today I will be mainly seeing Crossbills

It was cold but still when we went out this morning (~ 7.30) and the pattern was similar to the last few weeks – crossbills (186), siskins(300), goldfinch and redpolls(160). Some of the siskins and redpolls landed in the Elms/Middle field/ Whitehouse before moving on but never came down from the tree tops to have the photo taken.
This year’s migration has been the best ever at the Obs for crossbills (~800 recorded at Sandwich since the 1st Oct) and today’s total is the highest ever recorded in a single day.
There have been a steady stream of photographers trying to emulate the stunning achievements of Steve Raynaert but to my knowledge they haven’t landed again in the Ems – and if they have I certainly haven’t seen them. For those who haven't seen Steve’s crossbills pictures take a look at:  http://www.flickr.com/photos/walmerwildlife/
In the afternoon I decided on a walk along the beach to the Hundred Acre Field. The beach was devoid of dog walkers but it was also pretty devoid of birds too. There were a few skylarks and mippits, dunnocks, a lone reed bunting and 3 stonechats (opposite Prince’s Club house) - quite a rarity in the area after the last few winters. 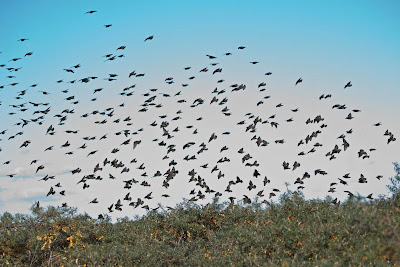 There is quite a flock of starlings building along the beech, I estimated 300 but theirs calls tend to drwon out anythoing else that may be around.
KWT have put up a bright new sign asking people to keep away from the beach up towards the point – though I doubt whether anyone will take any notice; they didn’t bother to heed the last one. 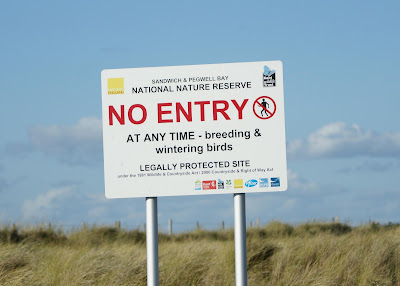 Posted by Greater Kent Birder at 23:14