Up and out early this morning due to the clocks going back but unfortunately the birding did not repay the effort. The Bay was near deserted.
Around the estate all we found were a few gold crests and the odd fly-over siskin but other than that it was very quiet. A walk down to Chequers along the beach was similarly unrewarding - a few mippits and skylarks. The highlight of the morning was the curlew sand which remains in residence on Restharrow along with 15-20 common snipe.............no sign of the Jack though.
After coffee and with the weather forecast promising a bright afternoon I went over to Grove to see the glossy ibis. It was there it took till 2 hrs for it to get reasonably close and by then (2.30) the light was going.
The birding was quite good in the intervening 2 hours with 3 peregrines showing, one spending most of the time on the deck, at least 3 marsh harriers (juvvy, female and a male) and a male hen harrier showing several times – though always over by the river.
By 3.30 I was back on the Ancient highway and settled down to wait for the hope for short eared owl. I didn’t have to wait long because one soon appeared hunting over the golf course and giving stunning views - views that my photographs failed to duplicate. I should have upped the ISO because the slow shutter speed (only ~ 1/250) meant everything was blurred. 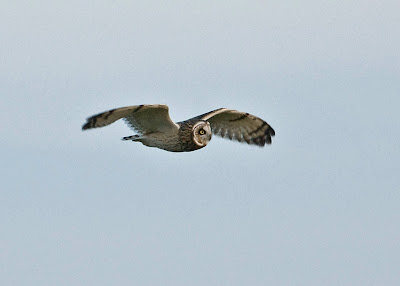 This bird hunted down to the Chequers when I lost sight of it but a few minutes later it re-appeared working it’s way north over the Willow Farm (RSPB) area of Worth marsh.
A little later I spotted 2 SEOs over the rough pasture down by Dickson Corner so I moved down to there. One of the birds disappeared immediately but the other hunted in that area for the next 10 minutes or so  – though the light by this time was fading fast and even using ISO 100 I could only get 1/400 to 1/500th of a second.
So brilliant views but rubbish photographer.........as my teachers would always say "Must try harder".
Posted by Greater Kent Birder at 18:38