Better to be lucky than good

The last few months have been pretty tough going both on the birding front and my (in)ability to get a reasonable photograph. Well today I’m pleased to say my fortunes took a change for the better.
For a change we went round the Sandwich circuit in the reverse direction.
The walk down to Restharrow scrape resulted in 40-odd fly-over crossbills (going south) and whilst the scrape only held common snipe, the curlew sandpiper and teal several of the snipe walked out right in front of the hide so despite the poor light some reasonable pictures were obtained:
From the scrape we walked the Ancient highway to the Chequers then back along the beach. Not much was seen, a couple of stonechat, 40-odd mippit and a number of skylarks so it seemed we were continuing in the doldrums but things were about to take a turn for the better.
When we were opposite the sailing club Ian pointed out some swallows but as I looked at them something different slid into view.  My first thought/call was “swift”, then I said “no it isn’t” – the wing tips were blunt and the wings the wrong shape,-  then I decided it was and called “yes it is”.  I think Ian then said “pallid swift” because I stopped looking at the bird and dived for the camera. Unfortunately  it didn’t hang around long enough for me to get a shot off. Ian in the mean time was studying the bird as it disappeared south with the swallows never to return.
For the next 15-20 minutes Ian recorded what he saw and remained  convinced it was a pallid swift. My thoughts in this don’t really matter because I’ve never seen one hence didn’t know what the critical features were (though I do now!) . My contribution is really limited to the blunt wings and a large pale patch on the throat!
The rest of the walk was quiet with only a few gold crests to show for our efforts but in reality our thoughts were still on the swift.
After lunch I went back to Restharrow but the snipe were all sleeping and the only thing to fly in front of the hide was a kestrel.
At about 2.00 pm I went along the Ancient Highway hoping the short-eared owls would put in another visit; with the sun shining I was hopeful of some decent images.
Whilst I was there Martyn turned up as did several other people. Eventually the SEOs showed down towards  Dickson’s Corner  but unlike yesterday there didn’t fly along the verge of the Ancient Highway so we moved closer.
By the time we had stopped near the Lapland bunting track the SEOs had decided to quarter the field south of the sailing club. Some of us moved on to Dicksons corner - so one of the SEO went north and directly in front of the hide at Restharrow scrape and the other started hunting the sea wall alongside the golf course. Great views in the sunshine but no shots.
Our final position was back by the Lapland bunting track and there we watched the birds cruise past where we had started out and past Dickson’s corner........but they stayed away from us.  It was now getting late (nearly 4.00pm), the sun had disappeared  behind a cloud and it was clearly too dark for decent images so we packed up to leave.
Martyn drove off just as 2 things happened – the sun reappeared and one of the SEOs started flying towards me. It didn’t come very close but it was close enough and resulted in some good images. 5 minutes later I went home happy with my afternoons work. 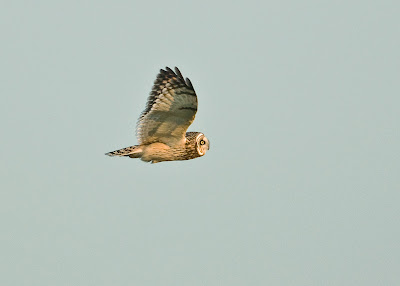 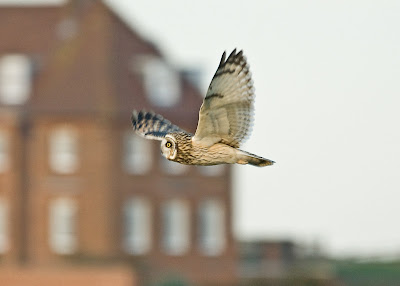 I know they say you make your own luck but do you?  If we hadn’t walked the circuit in the reverse direction and stopped at the scrape to photograph snipe it’s unlikely we would have seen the pallid swift.  If I’d left 1 minute earlier (i.e at the same time as Martyn) I wouldn’t have got the SEO shots.
I suppose my luck had to change some time but it does make you think - “Better to be lucky than good”.
Posted by Greater Kent Birder at 21:56