Saturday was a bit of a wash out until the phone rang – it was Chidders telling me that there were 2 guillemots at Dover and one was near the sea wall. Not one to look an gift-auk in the mouth I went down for an hour in what proved to be about the only dry(ish) part of the day.
The guillemot was out of camera range when I arrived but true to the assurances of Chidders it did come close on a number of occasions allowing some shots to be obtained despite the appalling light. 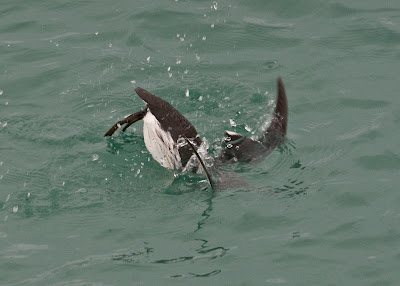 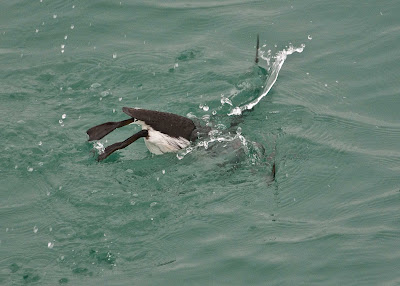 ﻿ ﻿
Despite the light I managed to get shots different stages of a guillemot dive - for those who don't know it dives by flapping its wings to go down and flies, like a long winged penguin, under water.
Whilst we were standing around waiting for the guillemot to return a wren flew from the seaward end of the pier and landed nearby - I assume it was a migrant but I didn't know wrens migrated.


Sunday dawned (just about ) with the wind in the north and a light drizzle so I sat in the car at Kingsdown and watched the ocean between 7.20 and 8.00.
There was quite a bit of movement with gannets (157 north) and dunlin (87 north) being the most numerous but I also saw 2 divers (assumed red throated), 3 guillemots, 17 lapwing, 18 shelduck, 11 wigeon and another 60-odd ducks further out that I couldn’t id. A few brent geese were moving but I’m not sure in which direction – 17 went north and 20 south. Highlight though was a bonxie that went north at 7.34.
At 8.00 I went up to Deal pier in the hope that a few things might be flying close enough to get some pictures.  The first bird I saw on reaching the end of the pier was a red throated diver flying north only 50 yards out and which sadly was the only one seen; needless to say I didn;t have the camera out.  Gannets were moving north for most of the session as were brent geese with the distant ones predominantly going south in large flocks (50+) and the close in ones going north in groups of about 20.
There was also a good movement of ducks out there with mallard, gadwall, teal, wigeon and shelduck all being seen as well as a lone eider - though most of these were quite distant.
Lapwings continued to go past throughout the session as did dunlin.
Part way through the session I was joined by Steve Raynaert who earned his corn by spotting a little auk splash into the sea south of the pier then immediately take to the air and fly out to sea. I grabbed the camera and managed a couple of shots that show Steve was not delusional!! 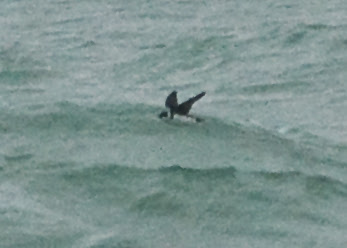 By posting shots like these I will have to stop making fun at Phil’s pictures.
So 2 days mainly spent on piers but reasonably productive and most importantly I didn't get wet
Posted by Greater Kent Birder at 15:05