8th
As the wind had gone pretty much round to the south sea watching was off the menu so we decided to walk to the point – the first time in ages.  On reaching the sea and turning north we were immediately rewarded with 2 snow bunting 30-40 yards north of where the footpath from the Obs reaches the beach.  The rest of the walk to the 100 acre field was very quiet however with only a lone stonechat and a few mippits and sky larks being seen though a flock of ~ 25 brents flew south.
When we reached the point we took to the footpath inland of the beach so as not to disturb the wader roost and was immediately rewarded with  a merlin and a few minutes later we had a marsh harrier (female) then a ring tailed hen harrier.  Also seen were ~ 5 little egrets, 2 grey heron, ~ 15 curlew (spooked by one of the harriers) and right up on the point itself there were several rock pipits along with the mippits. At the very end of the footpath we could see ~25 seals hauled up on the river bank and as we retraced our steps a flock of 40-odd redpoll flew over.
The return leg was uneventful (i.e. pretty  birdless!) until we got close to the footpath back to the Obs where we found the 2  snow buntings had grown in number to 14.
After a coffee I went to the Chequers to check out the beach and the Cinque Ports golf course.  Walking north from the Chequers I found another flock of snow buntings (~20) but as I was getting  close enough to consider some photographs  3 more flew over. Needless to say these didn'ty land with the other 20, no, the whole flock took to the air and followed the 3 south. I gave up at this point as it had started drizzling again and to be honest it was so dark it was stupid to even consider a photograph.
The 9th started with a heavy drizzle so we took refuge at Restharrow for the first hour. The curlew sand was still there as were 2 dunlin and 20+ snipe – no jack snipe though.
Once it stopped raining we walked the Ancient Highway to the Chequers and back along the beach.  As we crossed the golf course a twite went over (calling) and on the sea front we found 25 snow buntings up toward the sailing club.  Again they were very skittish and couldn’t get close enough for a decent picture. As we walked the beach there was a steady trickle of goldfinch going south plus a few groups of siskin and one group of crossbills. The Cellars and the Elms produced 1 woodcock a piece, the latter in particular giving great views as it flew past me some 15 feet away.
After lunch I went back to try for some snow bunting pictures but the first thing I found was a pair of wheatear – unfortunately only northern wheatear. 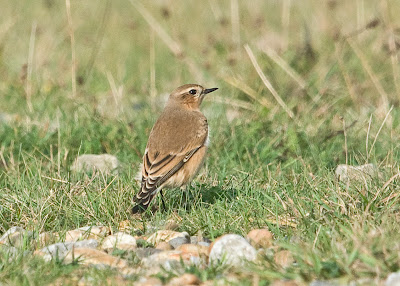 I eventually found the snow buntings south of the Chequers and had a couple of goes at getting some pictures. 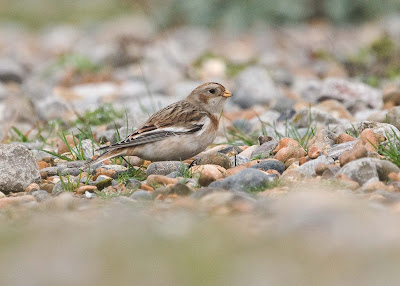 As always the best approached seemed to be  to sit sat on the beach and hope they would come close. Well they got pretty close on a couple of occasions most of the time they were obscured by the beach vegetation and overall my pictures were disappointing. When disturbed ( dog walkers, beach combers, cyclists) they flew several hundred yards out to sea the back to the beach a long way off so beware - if you go looking for them it may involve a lot of walking.
After that I had a look for the short-eared owls but none had shown by 3.30 so I called it a day. (I did however see a marsh harrier out on Worth marsh).
Still it was good to see the winter visitors – both the snow buntings and the twite were year ticks.
Posted by Greater Kent Birder at 22:39