For much of this year I have tried not to twitch other people’s birds but to find my own (or at least hang around with people who often find decent birds). There is no doubt that this approach can lead to some pretty poor birding however today managed to combine both.
It was cold and very misty when we set out today across Worth Marsh (a sea watch was completely out of the question as visibility was so poor and everyone has given up on bush bashing). The first mile or so was pretty much birdless but as we approached the “shooters pool” a bittern took to the air and landed in amongst the reed bed. At some places bitterns have been 4 a penny this summer but they are a pretty scarce commodity in the SBBO recording area so this lifted the spirits immensely and ensured that whatever happened next it was still a decent day.
The rest of the walk was still pretty quiet but with did hear 5 Cetti’s warblers (getting more numerous in the recording area I think) and spot a kingfisher disappearing down the north stream. The most significant concentration of birds being along the Worth Track which was alive with thrushes – blackbirds mainly but also song thrush and redwing and a lone fieldfare.
As we arrived back at the Obs the pager went – a grey phalarope had been seen at Pegwell - so Ian got his passport out and I drove him out to Pegwell – for Ian this is a major twitch.
We found the phalarope almost immediately and  could (just about) see it from the road but we went out onto the hover port to get a closer look and take a few record shots. There was no cover around so we didn’t try get too close in case we spooked it. 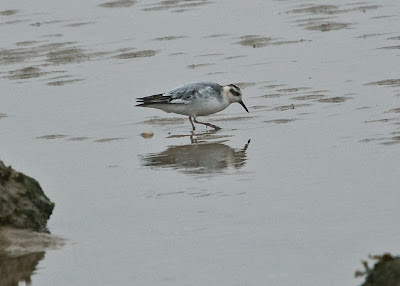 Back at the Obs (for a coffee) I was told that a jack snipe was showing at Restharrow so I went and twitched that too. It was pretty distant (over on the right hand side by the reeds) and the light was indifferent (or should I say crap?) but it bobbed its way around the reeds giving good if distant views. Most of the pictures are complete rubbish – the shutter speed not being able to cope with the bobbing but you can see what it is in a few of the pictures.
There were 3 other optimists in the hide with me and when they departed I was wondering whether the bird would come closer (with the hide being quieter) when everything took to the air – ducks, ~ 25 snipe and the jack so that was the end of that. As I got to the car I saw a flock of snipe going into land and a lone wader following them – so I assume they were all returning. Hopefully it will be there tomorrow and more cooperative.
So a self found bittern,  twitched jack snipe and grey phalarope and all in the recording area on the same day, so not a bad return;  though I did miss out on the long eared owl flushed from the Elms.
Posted by Greater Kent Birder at 17:09