Another Trip to Hythe

The forecast was for fog early on with it hopefully clearing as the day went on. A look in more detail at the Kent forecast suggested that the south coast would clear first. That made up my mind; I would go to Hythe and have another go at the rough legged buzzard.
I actually got to Hythe at 8.40 so I went to look for the purple sandpipers first. They were there and due to it being high tide they were a lot closer than I normally find them. The light was not good and it was still a little misty but since they were so close I could crank the ISO up to get a little shutter speed. It wasn’t enough to cope with them moving but I managed some very pleasing images none the less. 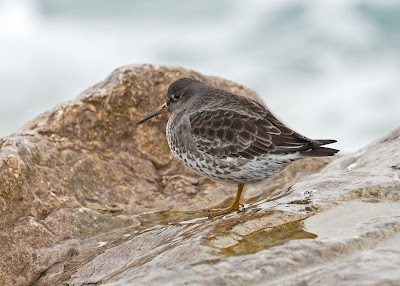 After 15-20 minutes I left them to their slumbers and went along to the Nickoll’s quarry.
For about an hour I just stood around waiting/hoping and seeing 2 stonechats, 2 green woodpeckers, a sparrow hawk, 2 grey herons plus a few reed buntings, mippits and goldfinch. At 9.50 the rough leg appeared on top of the grassy hill in the quarry (I assume it’s a pile of top soil removed to get at the shingle) and there it sat for 10 minutes or so until it disappeared. I waited another hour and at 11.00 it was there again.
I actually have no idea whether it walks into view or flies there because it just appears. After another 10 minutes it flew down to the ground and was lost from view.  At 11.30 I saw it again but this time it was flying SW, parallel with the coast road and away from where I was standing.  That’s when my resolve finally failed and I gave up.
Whilst I was waiting around the mist had more or less cleared and the sun was out so I headed east wondering whether to go for the red breasted merganser in Ramsgate harbour or to have another go at short eared owls.  Unfortunately the further north and east I went the more foggy it became. Since by now I was in the Sandwich area I drove home along the Ancient highway where a SEO was hunting in the gloom.  I didn’t stay long – it was too foggy so I wasn’t going to get a decent shot.
Posted by Greater Kent Birder at 18:27