Today in true Baldric fashion I had a cunning plan. I would get to Dungeness early and have a few hours watching and photographing the desert wheatear, I would then go and get some pictures of the glaucous and possibly the yellow legged gull then around midday I would go to Hythe for the rough legged buzzard – easy peasy.
I arrived at Dunge around 8.00 am and it was deserted  – I was expecting  quite a few birders there and  avoid the need to find it myself. Undeterred I searched around the Moat, around the light house then started searching the area inland of the light railway. As time moved on more people arrived but by 9.30 it had not been found (nor was it all day) so I gave up. So much for the cunning plan.
At  9.30 I went to look for the glaucous by the boats. Needless to say it was not there though I did locate a/the yellow legged gull that only compounded my growing frustration because it flew  off as I was taking the camera out of its bag! I’ve never photographed a yellow legged gull.
I then went to the ARC to see what was happening – lots of ducks but all very distant, though given the light I don’t think I’d gave got a decent picture even if they were right in front of the hide. Out on the water were loads of wigeon plus gadwall, pintail, mallard, pochard, tufties and teal. I counted 6 goldeneye and I think I saw the female long tailed duck but it went out of sight before I could get the scope on it. Whilst in the hide I only saw little egrets and grey herons but as I was driving back down to the lighthouse I stopped to check the bottom end of the lake and saw a great white flying across it.

Down near the lighthouse I stopped to check over a flock of gull that were on the shingle quite near the road. They were mainly herrings and black backed but the glaucous was there – this saved a walk up to the boats and a search along the sea front. I grabbed the camera and slowly edged forward taking pictures as I went but eventually it judged I was close enough and walked away. I stopped at this point. 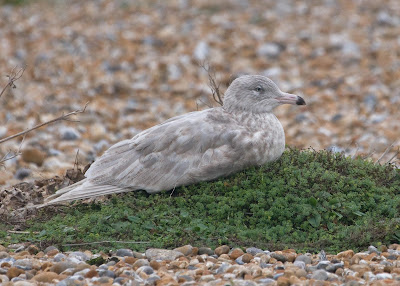 After that it was off to Hythe and my luck seemed to be in because just as I arrived the pager went saying the rough-legged had been seen at Midday. I found the footpath between the sewage works and the quarry and spotted a guy with a scope on a bank – I don’t know if he had sent out the midday report but he had just seen the rough legged land and showed me where he though it had gone down. He then disappeared for his lunch and left me to it. I waited over an hour before I saw the bird but by now it was atop a huge gravel bank quite a way off.
Despite the distance at least I had seen it so I waited. 15 minutes later I spotted it flying right but then it turned and flew straight towards me..... 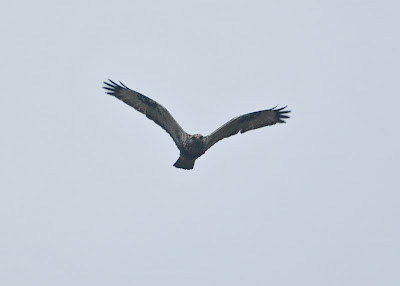 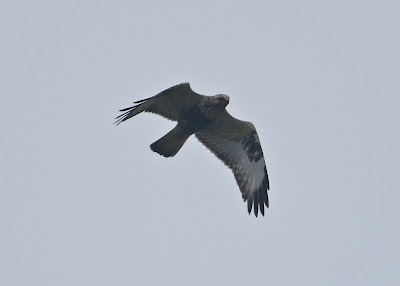 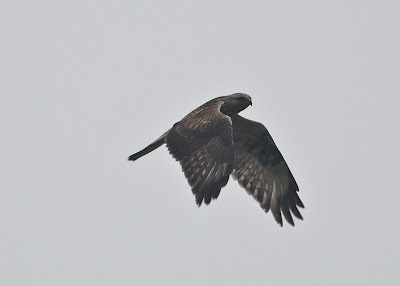 ....and disappeared over the tree lining the sewage works.  Absolutely brilliant views but the light was very poor and the pictures a disappointment.
So overall I missed the real prize - the desert wheatear -  but the rest of the plan worked (just).
Posted by Greater Kent Birder at 19:57