Day 6
Bon Accord before breakfast then after a morning on the beach at Pigeon Point we returned to the Adventure Farm early afternoon. We went at this time of day because the hummer feeders hang from the roof of the veranda and in the morning they would be completely in the shade. As it is after ~ 3.00pm the sun goes behind the trees putting the hummer feeders in the shade again so if you are visiting and want to take photographs plan the timing of your visit carefully.
Most of the session was spent trying to photograph the hummers ( 5 of the islands 6 species were present all the time). This presented 2 problems. Even at this time of day the light wasn’t brilliant and I had to use ISO 800 or so to get a decent shutter speed (1/1600th was typical) and my lens, a Canon 400 f5.6, has a minimum focusing distance of 3.5-4m and I couldn’t always get far enough away from the birds for it to focus (space is rather tight and getting the right angle to the sun was a problem especially with the ruby topaz). Something like the 300 f4 (or even a 200mm) would have been far more suitable. Distance from the birds is not a problem as they will still come to the feeders when you are only a few feet away. 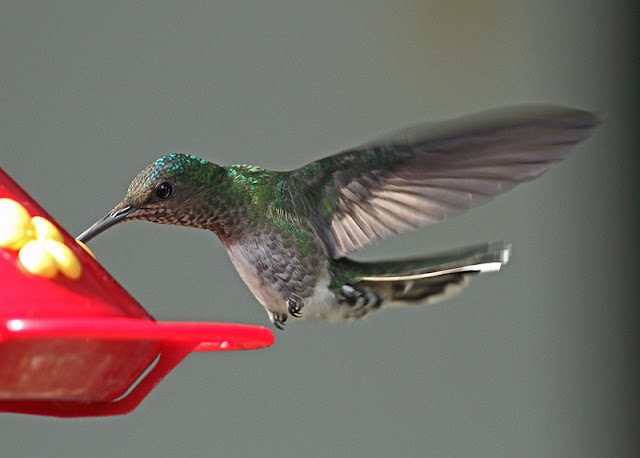 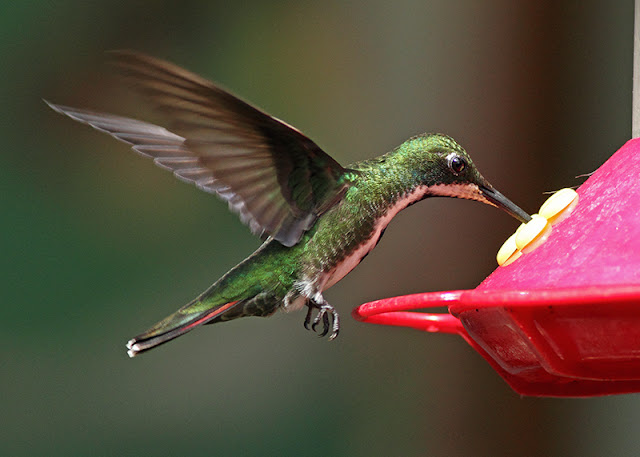 I actually spent too much time on the hummers (trying to get them in flight rather than sitting on a feeder) and I rather neglected the birds visiting the general feeding station – which most of the time I was standing alongside trying to get hummer pictures.  As it was I only got round to photographing the bird coming to the feeding station when the sun moving off it and the birds were in the shade. We didn’t get round to searching the grounds.
The most common  visitors to the feeders were: blue-grey, palm and white lined tanager, shiny cowbird, motmot, spectacled thrush and pale vented pigeon. Male and female antshrike put in several appearances and this was the only place where I saw ruddy ground dove.
If you are just after seeing the birds and getting the ticks then 2 or 3 minutes will get you all the hummers and an hour or so all the other regular visitors to the feeders. If pictures are your thing a few visits may be required.

Day 7 (Last day)
In the morning and despite my previous experience I revisited Grafton because it was the nearest accessible  lowland woodland and I thought it would be my best chance to get a woodpecker shot and this proved to be the case. All the time I was there a flock of short-tailed  swifts were wheeling overhead (characteristic wing shape), and a noisy flock of caracaras were around the Copra House.
New birds were restricted to a couple of antwrens  and a whiskered vireo but the pictures were too poor even for a blog. Throughout the session I could hear the woodpeckers calling and eventually I tracked one down, and while I waied a motmot put in an appearance:

The car was returned at lunchtime and we departed early evening.
So how was it overall?
The hotel was very nice and fantastically convenient for the airport but the lack of good birding habitat in the grounds and nearby was a severe restriction which precluded casual birding during the days spent around the hotel/on the beach.
As already stated Grafton was a huge disappointment but the Adventure farm exceeded expectations – I just wish it had been closer to the hotel.
Tobago Plantation did provide a number of good sightings and photo-opportunities but overall was down on expectations. It was supposed to be good for herons but I only found cattle egret. Previous reports had suggested it was good for ducks but I found none and I mean NONE. In fact I didn’t see a duck anywhere on the island during the whole week. There was a lot of habitat around the golf course that would have been interesting to explore.
Bon Accord seems to be a shadow of its previous self with only one water hyacynith covered pond being accessible and where I saw the bulk of the heron species. The sewage farm looks abandoned so another source of ducks and herons has gone.
I went back to Tobago I’d like to stay somewhere a bit more birdy – Blue Waters, or Cuffie River for example. I’d revisit The Adventure Farm and Little Tobago and I’d like to spend more time on the road up to the Main Ridge Rain forest to photograph jacamas and the other forest species when they stray into the light.
My list for the week was not huge – around 75 – but I took several thousand pictures and managed  some pleasing images though as always I would have liked to have done better!
More pictures are on my Flickr site.

Posted by Greater Kent Birder at 12:08