One Reason To Photograph Birds

30.4.2013
One of the pleasures of bird photography is that even when there’s little in the way of rarities around one can still have a brilliant day with the more common species (though you can have rubbish ones as well!).
My day started at Grove/Stodmarsh in the hope of seeing a nightingale or grasshopper warbler. As it was I saw neither and only heard a lone nightingale.
However photographically I got off to a reasonable start with distant shots of a turtle dove in the paddocks.

I found nothing to point the camera at along the river but near the Feast hide 2 greylags flew past and landed close by: 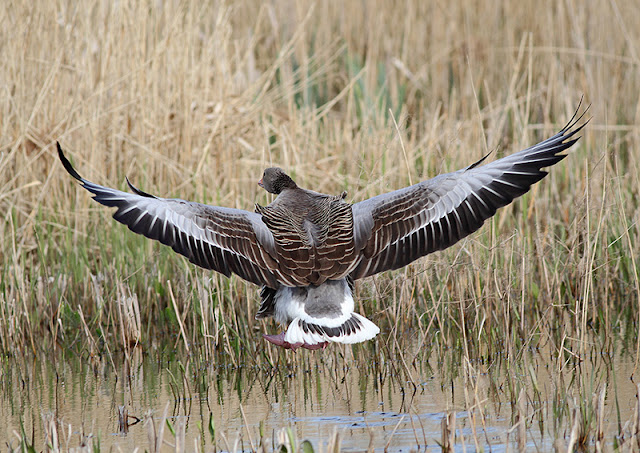 Up by Harrison’s I found a wood sandpiper:

and back along Harrison’s drove a sedge warblers was singing deep in a bush and allowed a close approach.

Along the river bank a chiff posed:
The rest of the circuit was uneventful both for sightings and photographs.
It still wasn’t midday so I headed for Reculver to try my luck with the sand martins. As normal I completely failed with my attempts at flight shots but the birds were collecting dried grass for their nests from the edge of the concrete path so I sat down and waited in hope. The martins never came close enough for a gallery shot (people stopping to chat didn’t help - why do they do that?) but it was a behaviour I hadn’t seen before – from the martins that is not the walkers.

After that I made my way home via Sandwich. First stop was the Elms where I immediately found a crest (calling) but while waiting for it to emerge a common whitethroat popped out of the bush 6 or 7 yards away and hopped around in front of me for several minutes.

By the time the whitethroat flew off the crest had disappeared unseen so I cut my losses and went to Restharrow scrape.
For several days people had been reporting yellow wagtails coming in front of the hide but as I arrived I was told they hadn’t been there in the previous hour.
Anyway I went in and through the glass shutters I could see one by the waters edge. I quietly opened the window (it didn’t fly) and fired off a host of shots.
The bird finally walked/hopped out of range then flew across to the island and I expected that to be the last of it but 10-15 minutes later it was back to repeat the exercise.
So there you have it – not a great days birding but it was a great day with the camera.
More pictures of the chiff, whitethroat and yellow wag are on my Flickr site.
Posted by Greater Kent Birder at 18:07