Well after 3 weeks or so stuck at home I finally went out.  I’ve been house-bound because I decided to have a go at that extremely dangerous game called DIY and came a cropper. I was repairing the roof prior to painting the soffits etc and when coming down the ladder I had to step off the ladder onto a small wall (about 18 inches high) well my foot slipped off the wall and down I went. Needless to say the air was blue as was my ankle a day or two later.
After a couple of days I was hobbling around and after a week I could walk pretty reasonably... well for a few minutes. Now I can walk about pretty much ok and without pain however the ankle is still pretty swollen and it swells up even more if I use it.
Still I had to give it a go sometime so yesterday I went to Rye, partly because Chidders and Martyn found a few things to point the camera at last w/e but mainly because I could cycle to the hides and minimise the use of the ankle.
On the bird front I didn’t see anything much out of the ordinary other than the roseate tern and that stayed very distant so if you are after revelations stop reading now!
First stop was the ternary pool because the sun is in a better direction there in the morning. A few BH gulls with chicks were on the island in front of the hide plus a family of Sandwich terns. The youngster was not however local in that as far as I know not a single chick was fledged from Rye this year. Poor weather and predation by the med gulls seems to have been their downfall and it seems foxes and badgers have been tucking in too. Indeed, whilst I was in the hide looking east across the Quarry a fox trotted across the front of the hide carry a chick of something. 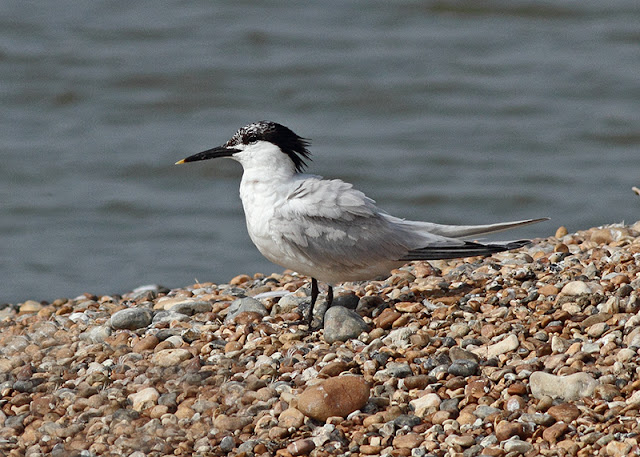 Also from the Ternary pool hide were a few little grebes and quite a few redshanks though these stayed distant.
A lot of Sandwich terns were flying past carrying fish so I spent a few minutes trying to get some flight shots of these from outside the hide – I got some shots but the quality wasn’t up to much. The best shots I managed during this particular session were of 2 jet fighters that came low over the reserve which I’ve been informed were F16s from the Dutch air force. 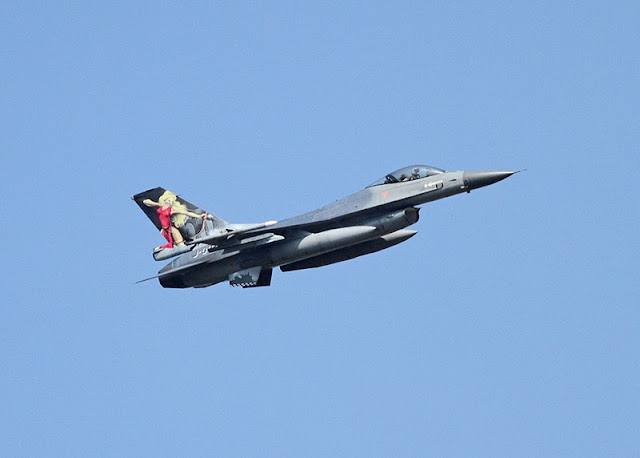 As the sun came round I went into the hide looking east over the Quarry. There was a lot more activity on this pool though much of it was very distant – dunlin, redshank, a summer plumage bar-tailed godwit, and lots of terns.
On the nearest island there were 2 families of common terns with chicks. (Whilst the Sandwich terns (and little terns for that matter) failed to breed the common terns have fared a little better with quite a few chicks being seen. Common terns breed later than Sandwich and have enjoyed better sea conditions). One pair of common tern parents was very diligent in guarding their chicks with one adult always being in attendance but the other pair deserted their chicks for long periods and the chicks insisted on exploring the island – their days could be numbered.

It was from this east facing hide that the roseate could be seen though whether I would have found it is debateable!

My final port of call was the hide on the beach side of the ternary pool. On one of the islands was a ringed plover and a group of redshank were feeding in front of the hide.

There were 6 present near the hide and 2 of them decided to have a scrap within camera shot: 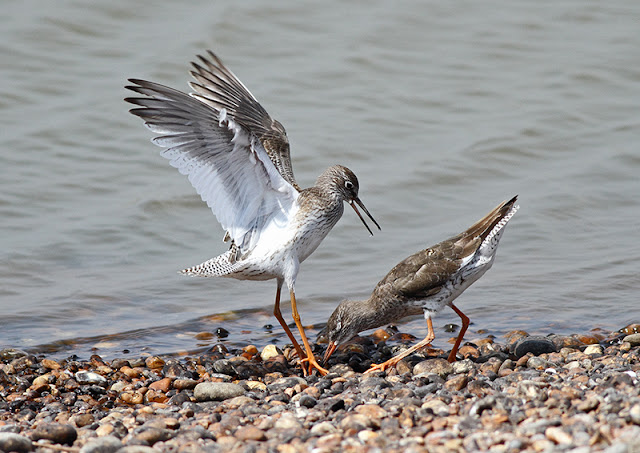 One pecked at something between the legs of the other causing the second one to go ballistic.
That was when I called it a day. As I said nothing spectacular but after being confined to barracks for 3 weeks it was nice to get out.

Posted by Greater Kent Birder at 23:53