Despite Rhayader being 100 miles from Skomer we had agreed that, weather permitting, we would go and so we did on the Tuesday (27th). It was an easy decision really because Rhayader was forecast to have wall to wall rain whereas Skomer was to have wall to wall sun.  It also was pretty easy for me because all I had to do was sit in the back of the bus and sleep but for Steve (who drove, as normal) the day was somewhat more arduous.
We arrived at Skomer around 7.30 and Al and Peter waited for the ticket office to open whilst the rest of us went looking for choughs on the headland (we are generous to a fault).
First up we found stonechats (3 pairs), linnets, mippits but we (Martyn and myself) soon spotted 2 choughs and worked our way towards them. Steve and Tim eventually found us (and the birds) and we all got some shots.


It was then time for the ferry. The sea was dead calm making for a pleasant crossing scattering auks as we went.
Climbing up from the ferry and waiting for the induction talk we could see a short eared owl hunting over on the the opposite side of the "Neck".
The previous day or two had seen black headed bunting and Blyth's reed warbler on the island but these were ignored as some of us went directly to the puffins and the others went for a stroll around the island. If the rarities had been found we would have twitched them but as it was they weren't...so we didn't.
It has to be said the Wick (the main puffin area) was a little disappointing. Yes there were puffins, yes they came within a few feet but the numbers were well down on our last visit (2 years ago, 1st week in June) and none were bringing sand eels to the burrows - suggesting most were still sitting on eggs. It would seem the birds are several weeks behind where they were on our last visit. 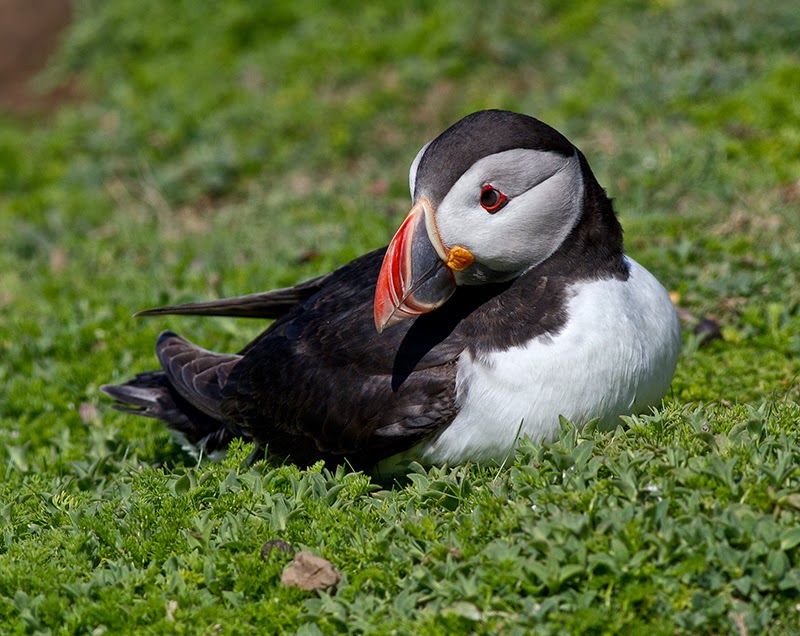 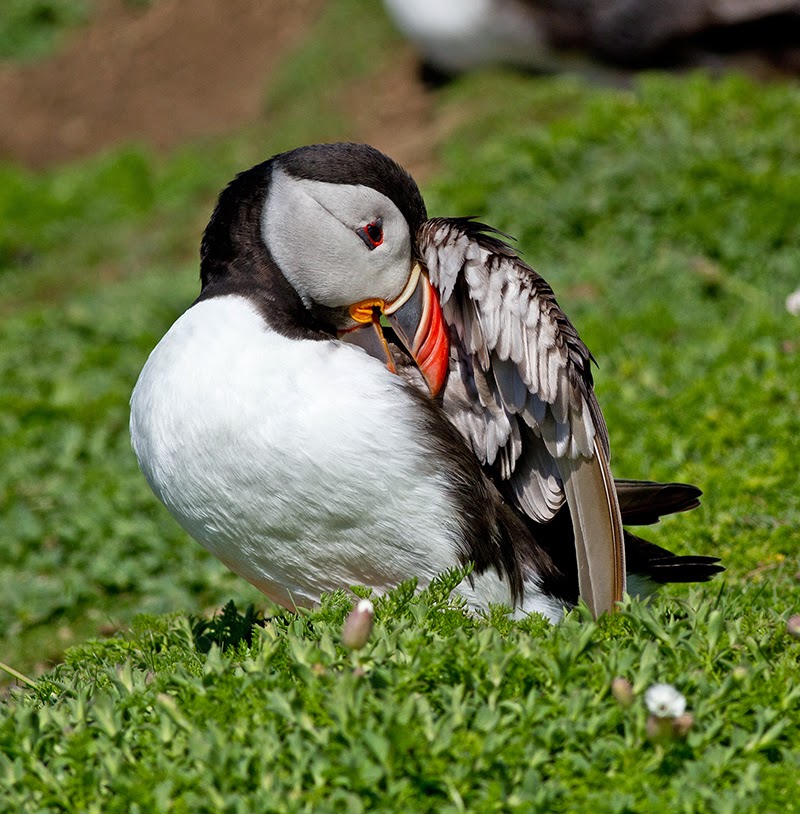 With so few birds flying and as far as I know none of us getting any decent flight shots we decided to move back to the landing stage to try our luck there.
I went back via the visitor center passing the hoards of lesser black backed gulls that call the island home at this time of the year. On the way I stopped of at a hide that only had gulls and kittiwakes in residence.
The walls along this walk had several pairs of oyster catchers displaying and calling, a sedge warbler "singing" in the bracken/blue bells,  and the rocky outcrops by the visitor center were home to a family of rock meadow pipits and rock whitethroats:


The island was awash with blue bells, another sign that things were well in arrears of what we have here and had there previously.
Back at the landing stage I tried ...........and failed to get the desired puffin flight shots. The birds were flying into the wind which unfortunately meant the sun was behind them - the outcome? The face of the bird was always shaded by their own bodies. It was more or less a complete waste of time and I don't think the other fared much better.


There were some very close razorbills, puffins and on the sea some guillemots which did provide a diversion and a peregrine also flew past which the auks were not impressed by.

So Skomer was what Skomer is - a great place to get up close and personal to some bird we rarely see down in Kent but was a little disappointing in that the eel carrying and flight shots of puffins were not achieved.

Our last 2 days were spent local other than a trip up to Bwlch Nant yr Arian and a trip to see a pair of breeding ospreys
Bwlch Nant yr Arian is another kite feeding center which was set in a tree lined valley. It was a very pretty place but now it a scene of total desolation as the trees have been totally removed due to an infection of the larch trees by Phytophthora ramorum. For an article on the problem see http://www.bbc.co.uk/news/uk-wales-mid-wales-24085562
The real issue, not discussed in the above article, is that a Forest Visitor Center now reside in a valley almost totally devoid of trees and will do so for decades.
All of this was unknown to us before we arrived so you can imagine the shock as we pulled up. Some of the group went for a walk around the lake but I spent a little time with the siskins that are still visiting the feeders then retired to the cafe to wait for the others.  We didn't stay long. 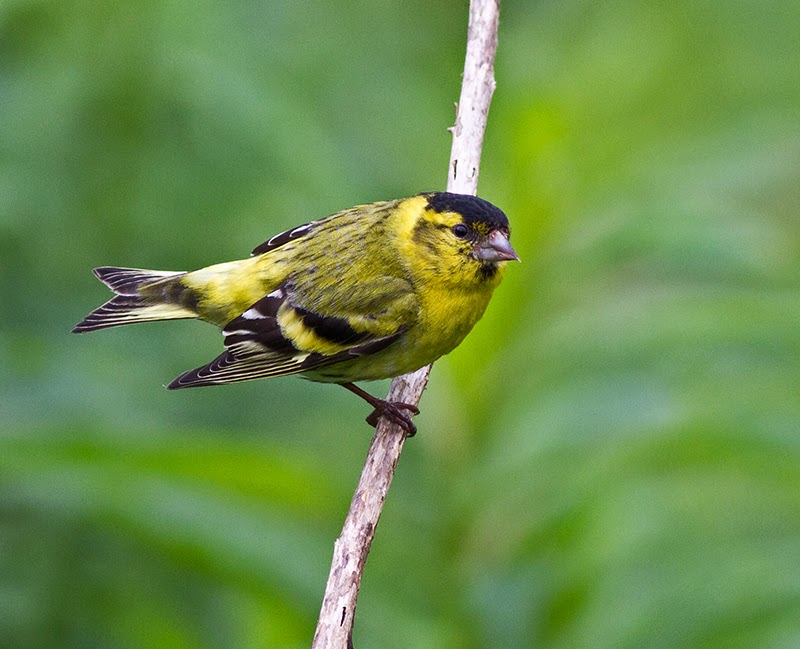 Another trip out was to Llyn Clywedog to see a pair of breeding ospreys but, as with most osprey breeding places, the birds are miles away from any view point . To see them go up the A470 from Rhayader, then the B4518 at Llanidloes which leads to the lake.

The balance of the time was spent in the Elan valley or at Gilfach. I actually spent most of my time in the Otter Hide with Alan at Gilfach  (the reserve wardens taking exception to my using a tripod around the visitor center) where as well as views of grey wagtail, pied flycatcher and  dipper, we had a pair of redstarts (not normally seen from the hide) and most unexpectedly a goosander.


That was about it really.
Overall it was good fun with the only dampener on the 5 days being the weather (which I blame Steve for), the late breeding of the puffins (which I again blame Steve for) and the unpleasant staff at Gilfach on our last day there (which I can't blame Steve for). I for one certainly won't be returning to Gilfach.

Posted by Greater Kent Birder at 14:03