I've just got back from 5 days in Wales.
As normal we (Steve, MW, TG, AA, SM, PL and yours truely)  used the Elan Valley Hotel as our base and visited the local terrain, Gigrin Farm, Gilfach Nature Reserve and even though it involved a 100 mile drive Skomer Island, Pembrokeshire.
Unusually for a bird tour organised by Steve Ashton the weather was not good, in fact other than our day on Skomer the weather was at best overcast and at worse wet. I'm afraid Steve has lost his mojo.
We also visited Bwlch Nant yr Arian (I won't say who wanted to go threre) which was a near total waste of time because a disease in the trees have resulted in the whole hillside being stripped bare so you have the strange site of a huge forest visitor center in a valley devoid of any trees. Unless they plant mature trees it will not be worth visiting this place in my lifetime (I wonder how the staff motivate themselves with that thought?) though it seems the kite feeding continues.
We departed from Kent on Sunday 25th and normally we would have gone to Gigrin for the kites the first afternoon but the poor weather changed our plans and drove the local hill side and finished up wandering around the locally either in groups or individually. For most people this was in fact pretty productive from a bird watching perspective because we ticked off dipper, wood warbler, pied and spotted fly catcher, redstart, bullfinch as well as the more common species (chiffchaff and willow and garden warbler as well as blackcap). From a photographic perspective it wasn't very rewarding at least for me in that very few pictures were taken - in fact the only ones I kept were of a spotted flycatcher - a species I saw more of this holiday than any of the others in this area. I'm not sure how well the others did with the camera because getting sense out of anyone this trip was pretty difficult. It must be the Welsh air.


Day 2 (Monday - Bank Holiday)
The 26th  was still overcast but before breakfast we returned to the local hillside where several wood warblers were singing; one singing right by the road. This bird continued to sing all day and every day we were there. It had 3 or 4 perches from which it sang so it was just a matter of setting up and waiting.
The light was not brilliant (1/200 at ISO 400 and f5.6 or so at best) but as I use a tripod nearly all the time if you take enough pictures some will eventually catch the bird when it's not moving and look reasonably sharp.
We saw or heard wood warblers just about everywhere we stopped where there was suitable habitat. Whilst we were about a week earlier than the last visit it seemed that for some of the species the year is running several weeks later. 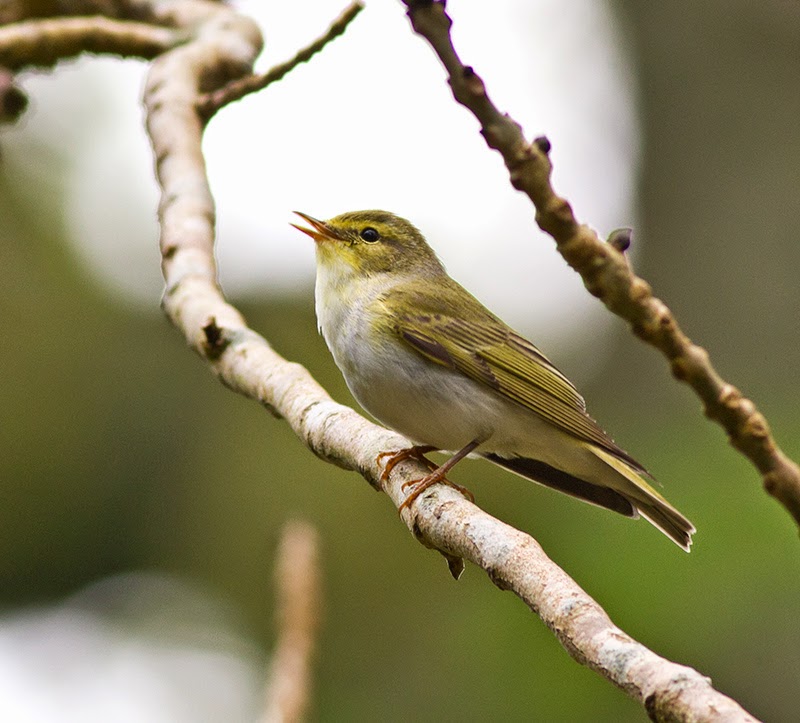 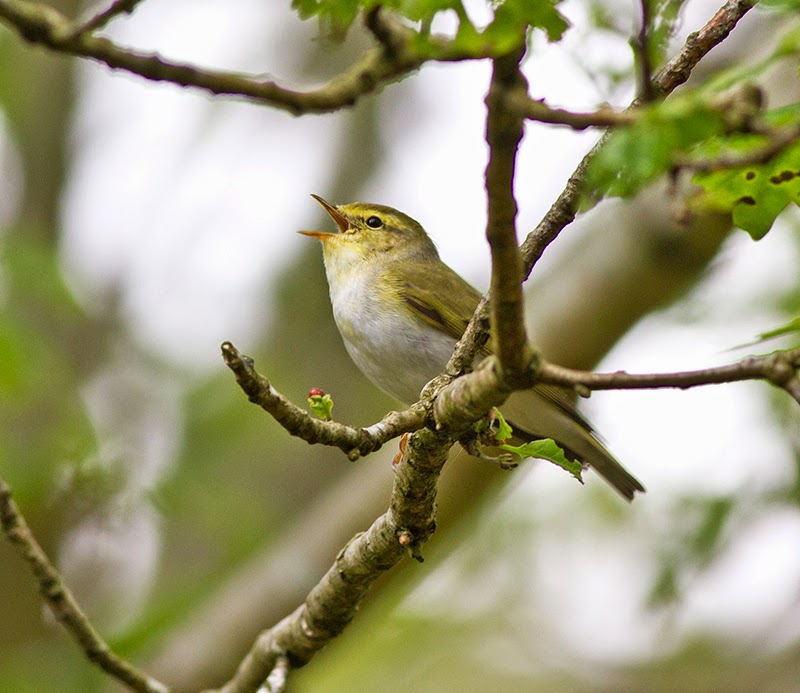 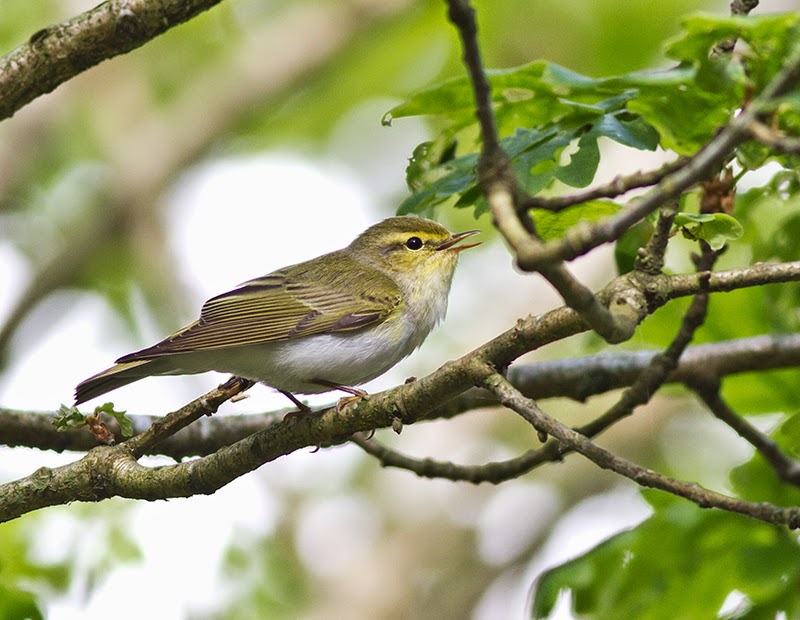 On the walk back to the hotel for breakfast I managed to get a record shot of the pair of bullfinch that lives near our hotel.


After breakfast we went to Gilfach where Martyn and I walked from the bottom up to the visitor center seeing a pair of dippers on the way and getting a couple of very poor shots.


Tripods are no longer allowed around the visitor center so given the number of people around I spent the rest of the morning in the Otter hide taking shots of a male pied flycatcher. The female was around but she was carrying nest material and spent most of the time in the nest boxes - again suggesting this pair were late though one box (with a camera; seen in the visitor center) had a pair where the eggs had just hatched. 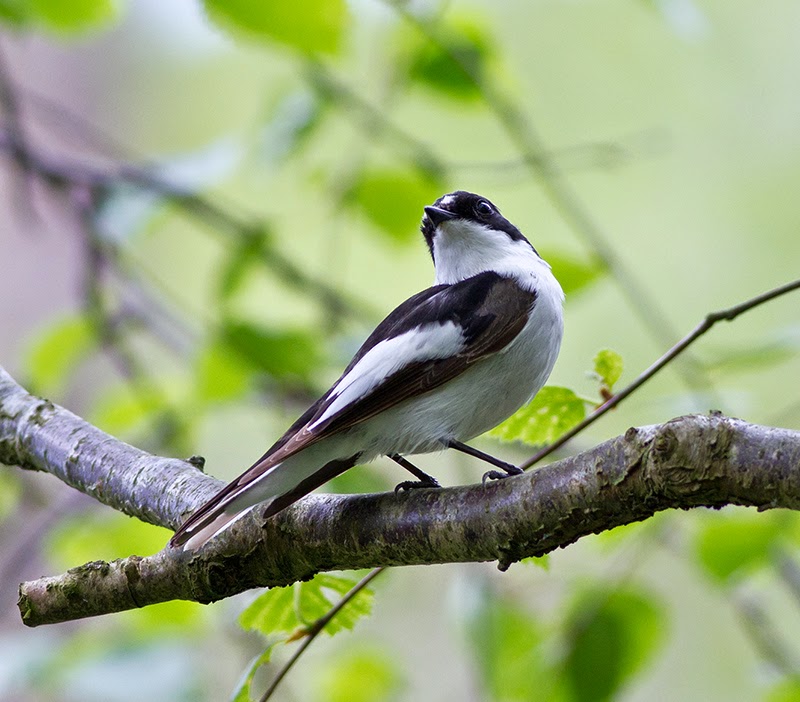 Around 2.00pm we departed for Gigrin where the afternoon was spent taking red kite shots. To me it seemed that there were more kites than ever at the feeding station but buzzard numbers were well down on previous visits (and rook number greatly increased).
As stated earlier it was still pretty dull and most of my pictures were taken at 1/640 to 1/800th sec with the shutter speed being set manually. However despite the low shutter speed I managed some quite pleasing images....though quite how I'm not sure! 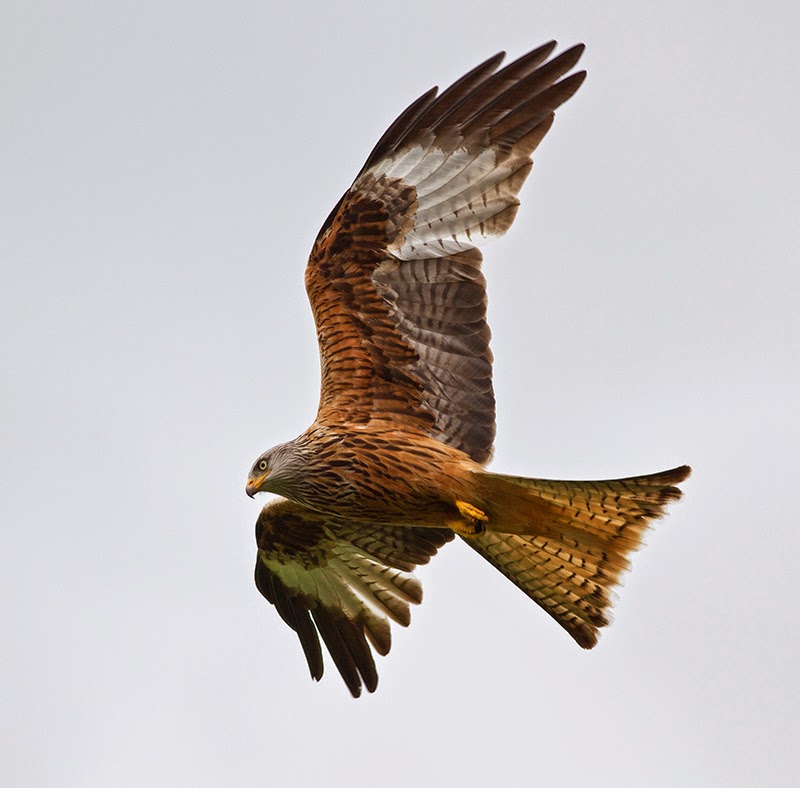 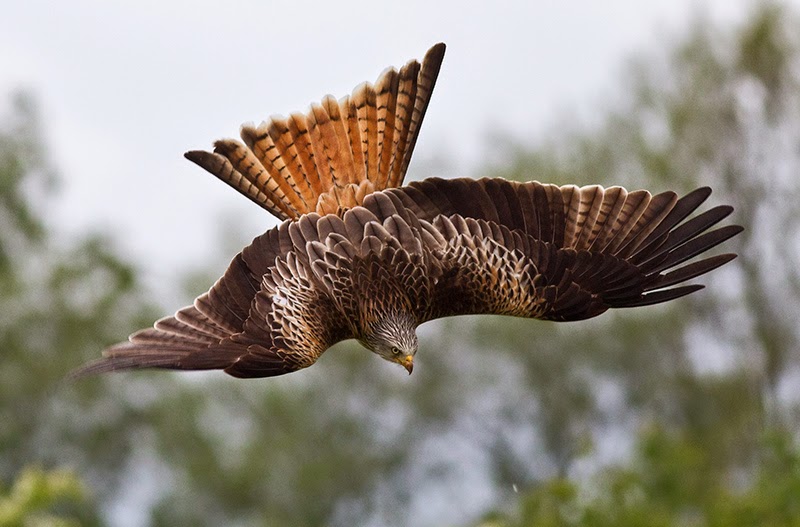 Normally I use spot focus for everything but for this visit I used  the 9 point focus option. With spot I spend a lot of time trying to focus on the face of the bird whereas with the 9 point option I just concentrated on keeping the bird in frame and let the focus system do it's worse; perhaps this enabled me to be more steady when panning etc. Whatever I was pleased with the results especially considering the conditions.

Posted by Greater Kent Birder at 07:30