Friday saw Steve A and myself return to Marquenterre - by coincidence a coach party from the SBBO was also going to be there.
The plan was to spend the first hour or so in the car park (as normal) then to try to improve on the spoonbill shots we managed the previous week. Things didn't work out as planned.
The car park wasn't as bird rich as last week with finch numbers in particular being well down. A couple of nightingales were singing as were a couple of chiffs, willow warblers and blackcap.
We worked our way along the landward line of pines towards where we heard a melodious warbler last week but it was totally silent today. We then started working the seaward line of pines back towards the park entrance where I started hearing crested tit. After about 10 minutes of searching we finally got sight of 1 then it (or another) flew out of the pines into the scrub near a horse paddock - this was good news because it meant the bird(s) would be at a lower level. Eventually we caught up with what we thought was 1 juvvy and 2 adults in some sort of fir tree that was about 20 ft high max.

For the next half hour we could see the birds searching for food and feeding the young one but photographic opportunities were limited and the birds refused to come out onto the outer twigs and show themselves. Then our luck changed ....in spades!
The tits first made their way to the back(shady side) of the fir tree then flew across the open ground into some low scrub. The birds were low down, and when in the open gave fantastic views and in bright sunshine.

It was around now we realised there were 4 or even 5 juveniles and one in particular sat in the same place for probably 30 minutes and although pretty deep in the scrub by careful positioning you could get past most of the leaves and onto him. He obviously found waiting for food tiring because after a while he fell asleep!


The best pictures were of the juveniles because they would sit somewhere for a few seconds and give you a chance to get the camera on them but the adults were constantly on the move and I certainly never got the shot(s) I wanted of them. 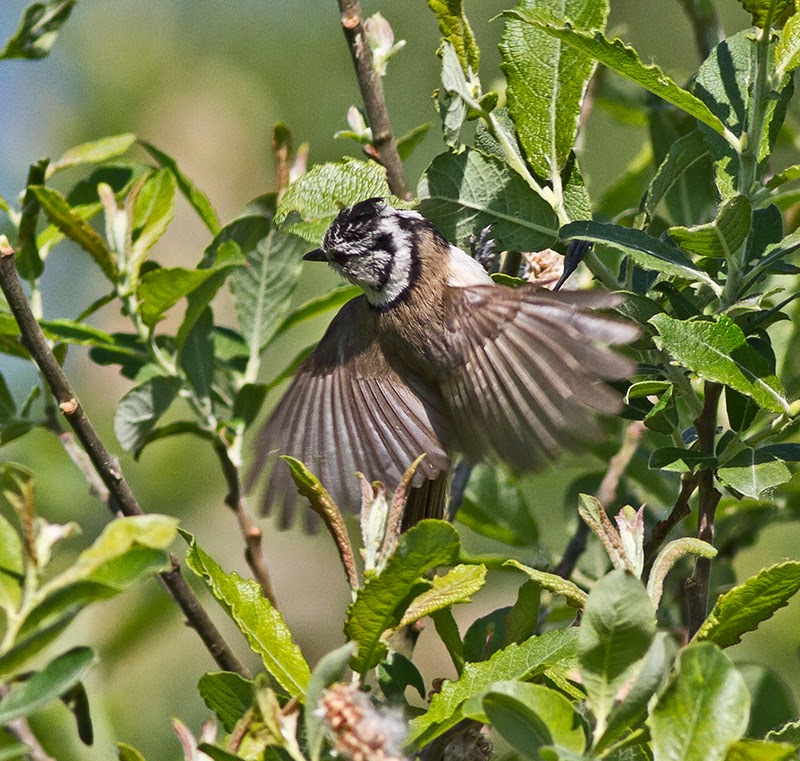 Eventually the birds moved back to the fir tree then deeper into some scrub so we called it a day with them. It was now around 11.30 - we'd spent over 2 hrs with the crested tits - so we entered the park happy in the knowledge that whatever else happened we'd had a good day with the camera.
On reaching the first pool after the visitor centre we immediately spotted black winged stilts (7). These were not present last week and so became the target for our attention for the rest of the day.
Several times they threatened to come close but each time noisy groups of day trippers out for a walk in the sun (most didn't even have binocs) disturbed them and the birds retreated. We did have a pop at the storks and spoonbills flying over but overall activity on this front was slow compared to last week although a couple of each did land on the pool - I just wish the spoonbills had landed a little closer. 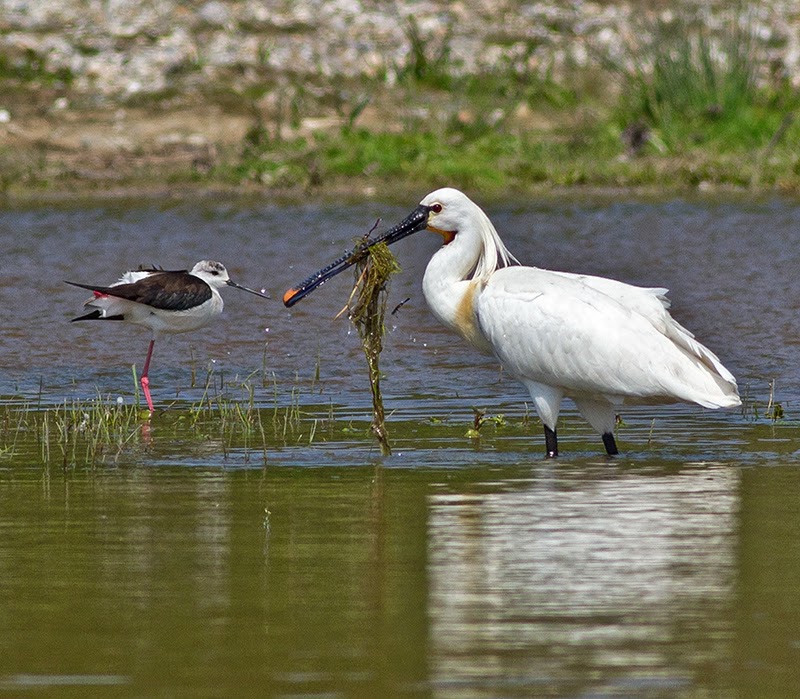 A short session in the heron stadium showed the spoonbill young to be quite advanced.


So another good day. I wonder whether we will have another go when everything has fledged and bird numbers moving about are higher.